You don't buy a Honda Hybrid to save money, you buy it because it makes you feel good about doing your part to make the world a better place. To this end, it works. The Hybrid is nearly as joyful to drive as a regular Civic with good performance, a roomy interior, and gas mileage that is consistently in the 40-mpg range or better. The bad news is that it does not handle like a regular Civic because of its heavy battery pack and gas mileage oriented tires. So, in essence, this is a delightful commuter car and a bargain at about $20,000.

Price wise, the Hybrid runs a few thousand dollars more than a comparably equipped Civic. For the additional funding you get a lot of technology and some pride of ownership. However, even with gas at record high levels and the Hybrid returning about 30 percent better fuel mileage in daily driving, it would take several years to save the extra cost of the Hybrid. And, just as you would be narrowing the difference, the Hybrid's battery pack would have to be replaced at a cost of several thousand dollars. On the other hand, if you justified your car buying decision only on costs everyone would be driving a sub-compact vehicle. A car has got to make you feel good to own it and the Hybrid does just that. 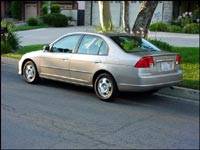 The major competition for the Hybrid is the Toyota Prius. The Toyota car has been redone for 2004 and offers significant improvements over the excellent first version that debuted a few years ago. Currently, the difference in the new Prius and the Hybrid is in the ride, quietness, interior space, and appointments. Overall, the Honda is sportier, but not too sporty, and is less visible. In fact, when we went to a crowded mall we could not find our Hybrid because it blended in so well with all the other Civics. We had to use the remote and look and listen. We felt like a mother lion who was searching for her cub.

Mom's view: I didn't mind it at all, except for the gauges which were too small and too difficult to read with their bright and trendy colors. I also found that the air conditioning was hard pressed to cool the interior in our 105-degree test days. I would have the windows tinted immediately. Otherwise, this is a handy car.

It just keeps getting better and better. While that's just my humble opinion I'm sure it would not be difficult to find plenty more who'd agree with me. Fo...

Every Japanese performance car enthusiast raised a ruckus when Honda dropped the Civic hatchback in 2000. And then to make matters worse the 160-hp Si-R coup...

Pricing Announced for 2003 Civic and Odyssey