For some time now, Apple has made little secret of its desire to develop a electric car. A recent report in the Korea Economic Daily reveals that the communications giant is talking to Hyundai about a possible partnership, along with other potential dance partners.

The discussions are said to be about cooperation on the development of electric cars and batteries. The news boosted Hyundai's shares by 20 percent.

In December, sources told Reuters that Apple, whose first forays into the electric-car domain have ebbed and flowed since 2014, now aims to produce a vehicle with its own battery technology by 2024.

Then, news of a possible collaboration with Apple boosted not only Hyundai's shares, but also those of a number of Apple's current and potential partners. Analysts said at the time that the potential for such a development would depend on whether Apple (or a potential partner) had made advances in battery technology. Today, we know that Hyundai is one of those potential partners.

“We understand that Apple is in discussion with a variety of global automakers, including Hyundai Motor. As the discussion is at its early stage, nothing has been decided,” a Hyundai spokesperson was quoted as saying by CNBC. 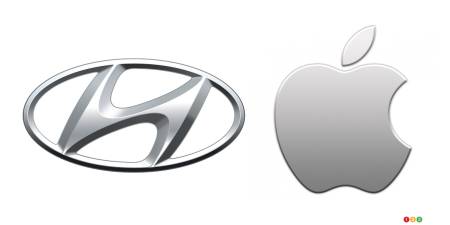 Apple's automotive efforts, known as "Project Titan," date back to 2014, as mentioned. At that time, the company began designing its own vehicle from scratch. At some point, Apple stepped back and re-evaluated its goals. Doug Field, an Apple veteran who had worked at Tesla, returned to oversee the project in 2018, eventually laying off 190 people from the team the following year.

Since then, Apple has made enough progress to have a realistic goal of building a vehicle for consumers, said two people familiar with the project, who asked not to be identified because Apple's plans are not public.

If many saw the goals that Apple set itself back in 2014 as a bit far-fetched, these should be taken more seriously in 2021, when electrification is set to accelerate dramatically in the industry.

It will be interesting to see who the company will eventually partner with. We now know that Hyundai is in on the discussions; on its end, the Korean automaker will want to make sure it's a good fit before it embarks - if it ever decides to do so.

Hyundai has shared details and a few images of the first vehicle to come from its new all-electric vehicle brand. The Ioniq 5 SUV will be presented in full i...

Articles By
Daniel Rufiange
A Patent Application Points to a Toyota/Lexus...
Article
MSRP Announced, Reservations Now Open for the...
Article
GM Pickup Truck Production in Oshawa to Start...
Article
More from this author