Mention Hyundai and electric cars to people, and most people will think first of the Kona. The Kona Electric is set to make its debut this spring and will offer its owners an impressive 415 km of range. It’s easy to see why it gets so much attention.

But the Kona is not actually Hyundai’s first foray into electric mobility; the Korean automaker also sells the IONIQ, which has been around for longer. But the dizzying pace at which things are changing in the domain means that the 200 km of range the IONIQ offers is now considered feeble.

The model is still very young, and it’s electric, so it’s out of the question for the automaker to abandon it. Instead, as of this year the model’s range will get a boost. This is according to a report by InsideEVs.com, which also specifies that the new battery pack will be a 38.3 kWh unit, as compared to 28 kWh previously.

This adds up to a 37% improvement, and will bring the range of the car up from 200 km to around 270 km. this may not be an earth-shattering jump, but it’s definitely a move in the right direction. 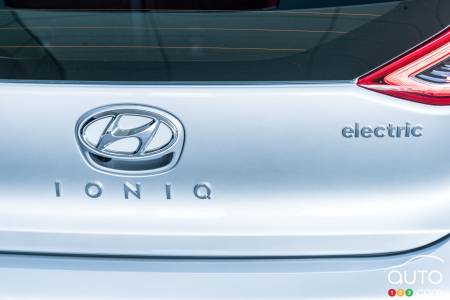 It will be interesting to see if the plug-in hybrid version will also get a boost in range for its battery. Currently that powertrain delivers just under 50 km of range, and an increase to 80 km would allow it match the Chevrolet Volt, for example,

These improvements aside, the model will get a few other mid-cycle refreshes. Both front and back ends will get tweaked, and new wheels would be introduced. Inside, the multimedia system will be updated.

In principle the first version to head for dealerships this coming summer would be the PHEV, while the all-electric would debut in early fall 2019.