Now, the two companies will work together over the next three years to develop new tire technologies destined for use with electric vehicles. The new partnership comes on the heels of an expiring five-year partnership to develop tires for EVs, a deal that resulted in the specialized tires used for the Ioniq 5 SUV.

“The collaboration between Hyundai Motor Group and Michelin over the past five years contributed to the successful launch of the Hyundai Ioniq 5. We are pleased to announce that the relationship has been extended for three more years.”

This new deal between the two companies will see efforts focused around three areas: tires made of environmentally friendly materials, tires designed for next-generation electric vehicles, and a tire monitoring system for use with self-driving vehicles.

Other, more-advanced elements will also be explored, including the reduction of vibration and noise generated by high-speed electric vehicles, as well as increasing the percentage of environmentally friendly materials in tire construction.

The new technologies to be developed will initially serve the Hyundai group's higher-end models. 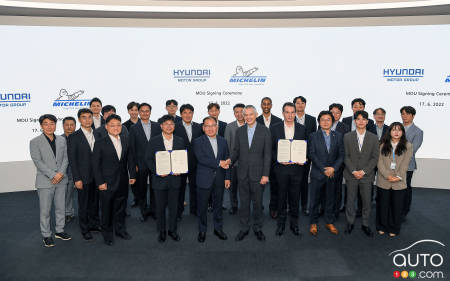 Photo: Hyundai
During the announcement of the extended partnership between Hyundai and Michelin