We've known for some time – make that several years - that Hyundai is preparing a pickup truck. Yesterday, the Korean automaker shared four real-deal official images of the Santa Cruz. They’re dark images, of course, designed to create an air of mystery and not reveal too much ahead of the model’s official launch on April 15. It also means that further small adjustments are likely for the vehicle. But still, we're starting to get a very good idea of what the Santa Cruz will look like.

And what that look is, well, we’re getting what the concept indicated all that time ago, that is to say a Honda Ridgeline-type truck, a vehicle more oriented towards outdoors enthusiasms than heavy-duty work. In fact, Hyundai isn't even talking it up as being a pickup truck, but rather a Sport Adventure Vehicle. 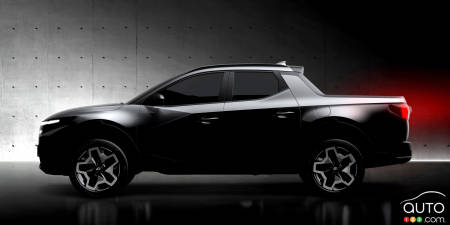 We'll resist the temptation to help introduce a new name to describe what remains a pickup truck, but it gives you an idea of the model's vocation and the way its makers envision it. The Santa Cruz is built on a unibody structure, but its size seems a bit more compact than the Ridgeline's. We'll have to see when we can get our eyes on the model as it sits alongside others.

Its styling isn't as unique as you’d imagine from the first glance, though. The grille is derived from those of the new Tucson and Elantra. The body style is clearly more muscular, however, with characterful lines running throughout. At the rear, the tailgate is stamped Santa Cruz and the Hyundai name is found on its handle. T-shaped lights are arranged horizontally and complete the signature. An interesting feature is the running board incorporated into the rear bumper to allow easier access to what's in the bed. 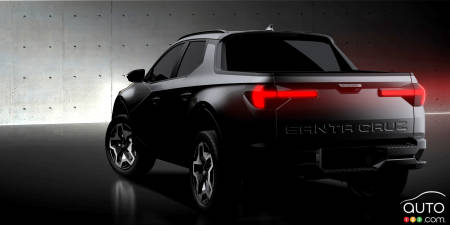 Hyundai says the Santa Cruz is going to have a “flexible bed for gear, cutting-edge connectivity and a highly maneuverable all-wheel-drive platform”, and promises a very versatile vehicle. We’re further promised “powerful and efficient engines”, which of course tells us the product offering will include more than one engine choice.

As mentioned, the full presentation of the Santa Cruz takes place on April 15. Hyundai has confirmed that the truck will be built starting this summer at its Montgomery, Alabama plant. 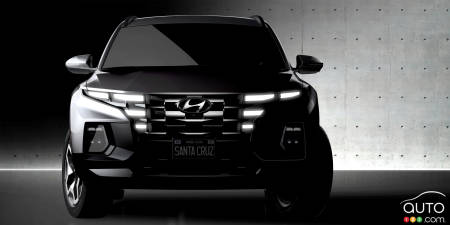 Hyundai Canada has just released pricing for its 2022 Santa Cruz pickup truck. Some fans that have been waiting for the new model will be disappointed, as th...