At Detroit’s North American International Auto Show in January 2015, Hyundai unveiled an intriguing pickup concept. In the months and years that followed, a host of rumours and bits of information pointed to the likelihood that this model would eventually get produced. The official party line at Hyundai, however, was to repeat that nothing had been decided.

Now, courtesy of Hyundai’s head of design Luc Donckerwolke, we have confirmation that the project will go ahead.

"You've seen the [Santa Cruz] pick-up from the 2015 Detroit show, that car is under development at Hyundai."

- Luc Donckerwolke, in interview with Autocar

The executive added that his team of designers had nearly finished their work and that the project was now moving from the phase of sketches and clay models to actual production.

Some caution is in order when speculating about what the pickup will look like. Six years will have passed from the concept’s first reveal and the eventual production version; in terms of design, that’s an eternity. It’s safe to assume it will sport most of the visual cues installed on the brand’s most recent SUVs, but it’s also true that so much can still change.

Especially as we’re talking about a wholly new model for the manufacturer, which will be dipping its toes into new waters when entering this segment for the first time. The company will want to make sure it’s gotten the design right. 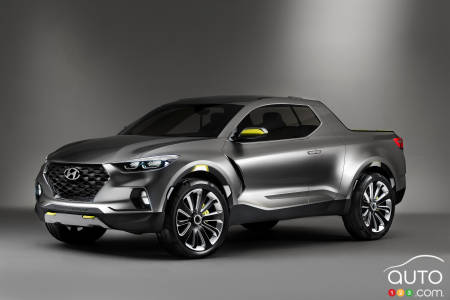 The pickup, still without a name, will share its platform with that of the next-gen Hyundai Tucson, and it will be assembled at the company’s plant in Alabama. Having construction based in the U.S. will allow the carmaker to avoid having to pay the 25% tax levied on imported cars, a measure first instituted by the Lyndon Johnson administration in 1964.

Chicken tax
That tax was first put into place as retaliation for the levying of a tax on the importing of chickens form the U.S. to France and West Germany. It initially targeted food products before expanding to include trucks, as an attempt to protect the domestic American market. Today, all that’s left of the so-called Chicken Tax is the car levy.

Getting back to the Hyundai product in development, we’ve also learned that Kia might get its own variant; it would appear on the market a short time later than the Hyundai.

Hyundai’s first pickup will compete most directly with Honda Ridgeline and similar models rather than midsize truck like the Tacoma. And while we’re using the term pickup truck here, in reality the Tacoma and the new Hyundai vehicle have entirely different vocations arising from their different architectures.

We will surely be gleaning more information in the coming months, so as usual stay tuned! 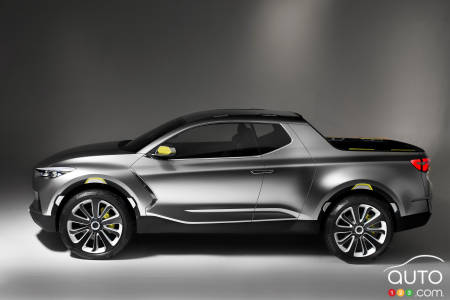