We’ve known for a while that Hyundai is developing a midsize pickup, and up until now the belief was that it would be based on a monobody structure and compete mainly with the Honda Ridgeline.

That belief was based on the fact that the Santa Cruz concept, on which the new model is supposed to be based, was designed with a monobody structure.

The Korean automaker has now confirmed, however, that the model it is working on will actually start from a true truck body, or a ladder-frame chassis, allowing it to be sued for heavier-duty purposes.

Which means Hyundai is redirecting its aim to take on not the Ridgeline but the likes of the Ford Ranger, Chevrolet Colorado and Toyota Tacoma.

Esthetically, the design of the model is said to be pretty set in stone, and Hyundai says it will be highly distinct from the rest of the brand’s products. No attempt, in other words, has been made to “harmonize”” the styling of the pickup with Hyundai’s current crop of cars and SUVs. 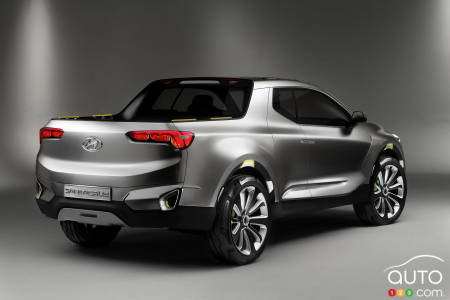 We’ll wait for the real thing before we make any definitive judgments, but we like the sounds of the company’s approach.

"What's clear to us is that if we're going to bring a [pickup] out, it had better be a [pickup]. We've got past the first hurdle of what it needs to look like, but it needs to be functional as well. That's the important part."

The challenge for the vehicle’s designers now will be to make it as competent as those models it will compete with in the areas of load and cargo capacities, but also in terms of off-road capabilities.

For now, we have no confirmation of any timeline from the company regarding the pickup’s launch date. Rumours point to a first presentation next year, with commercial launch due in 2021.