Some concepts for some concept cars are easier to understand than others, and perhaps this has never been more obvious than with Jaguar's intention to build its most-powerful road-going roadster ever.

That would be the 550-hp XK-RS model that was unveiled at the recent Chicago auto show by the British firm that's owned by the Ford Motor Company of Detroit.

Developed by Rocketsports Racing of Lansing, Michigan, in cooperation with Jaguar North America, the XK-RS concept ups the displacement of the Jaguar AJ-V8 Trans-Am race engine from 4.5-liters to 5-liters to deliver 550-hp and 500 lb.-ft. of torque.

To appeal to the traditional sports car enthusiast, the standard six-speed ZF automatic transmission was replaced with a six-speed manual transaxle, and repositioning the driveline weight to the rear of the car resulted in a classic 50:50 weight balance for improved handling.

Rocketsports also used its expertise with its Jaguar XKR Trans-Am racecars to modify the production XKR's body to ensure ground-hugging stability at very high speeds. The car was lowered at the windshield by about 10 cm and given a track that's about the same amount wider.

Special underbody air tunnels running the length of the car were created, along with deeper front and rear spoilers, wider wheel arches and aero-style sill sections. These might be familiar to you if you paid strict attention to the specially-developed XKR that appeared in last year's James Bond adventure, Die Another Day.

The production XKR's suspension was also modified to ensure supercar handling, so coil-over high-performance Penske shocks were added. To give the concept some whoa to match all this go, R-Performance Brembo calipers with drilled rotors (13-inch front/12-inch rear) were added.

To complete the style appearance, the concept roadster is painted in rich black lacquer with Pearl Black Jaguar 'leaper' graphics similar to those used on Rocketsports Racing's XKR racecars painted along each side. 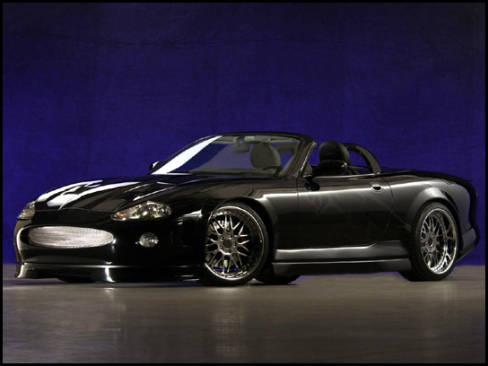 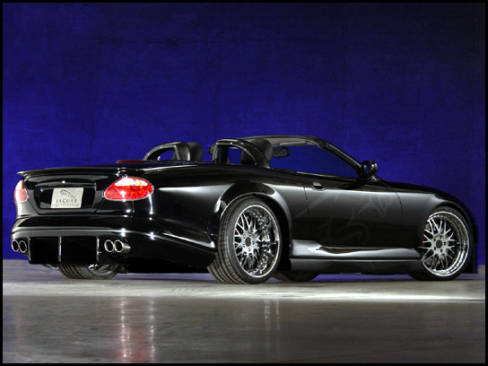 It's probably the most American car out there- and certainly the most storied and celebrated muscle-car of all time. For generations, the Chevrolet Corvette ...

CAPE TOWN, SOUTH AFRICA - Mercedes chose an exotic location for an exotic automobile when it planned the international media launch of its Mercedes-Benz SLR ...