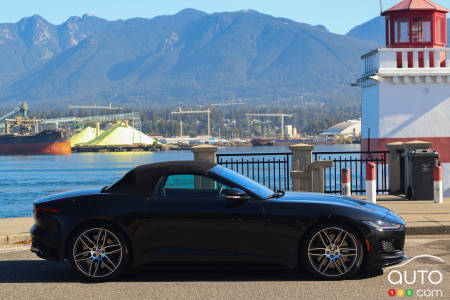 •    There were a few tears shed during our week as we prepare to say goodbye to arguably the beautiful car on the market today.

•    Because next year, this beauty will be gone.

A quick look at the F-Type page on the Jaguar Canada website reveals that for 2022, there are just two models available: the P450 seen here, and the R version. Both come powered with growly, gruff and powerful 5.0L V8 engines. That’s it. No more supercharged 6-cylinder, no more turbocharged 4-cylinder. Just a good ol’ fashioned ‘no replacement for displacement’ V8 (with a supercharger, but anyways), hidden beneath a front-hinged hood and sending its power to the rear wheels only (know that there is an AWD option). For car people, that’s incredibly cool, right?

Well, on the surface, most definitely. I mean, come on – what F-Type buyer doesn’t want to be forced to choose arguably the greatest and most storied engine type of all time? There’s never the temptation to save the money and opt for the smaller engine, so you’ll never feel guilty when you go the other way. Not that there’s inherent guilt associated with buying a V8; I know it would probably stick in the back of my mind.
But there’s a cloud inside that silver lining.
Why? Because the lack of trims and engine choices are an indicator that the Jaguar F-Type as we know it is not long for this world. There could be electrified powertrain of some kind on the way. Just like what’s happening with the Porsche Boxster, just like what’s happening with the Mazda MX-5. Now that Dodge has announced the cancellation of their V8-powred muscle cars, the writing is scrawled clearly on the wall, if it wasn’t already. Cars of this type just aren’t long for this world.
Which is a shame, because man, that F-Type spouts awesomeness from its quad tailpipes as soon as you press the start-stop button. I could just sit and listen to it idle, just as if I were listening to my favourite vinyl. And that’s with the exhaust in quiet mode. Activate loud mode either by pressing a button or selecting Dynamic drive mode, and it’s watch out, neighbours!
Thing is, with the F-Type, you don’t even need to fire that motor to know it’s going to be an event, because just look at it. Even in black, you can see the bristling muscles ‘round the fenders, take in the ultrawide stance and marvel at the wheels.
Browse cars for sale available near you 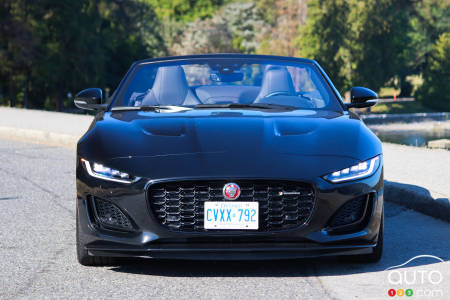 Photo: D.Heyman
Front of 2022 Jaguar F-Type
Yes, the styling was toned down a little after a 2019 facelift which saw a change to the head- and taillamp lenses and not much else, but this is still a sports car with presence, still one that will have you regularly looking over your shoulder as you walk away.
As you can see, my tester was the convertible model and typically I prefer a coupe’s styling, but Jaguar has managed to find a way to stow the power-folding roof without causing trunk storage loss and without forcing an unsightly hump in which to house it. The F-Type is well packaged in that regard. Also it folds in about 12 seconds with the flip of a switch, and takes the side windows with it – I like that. 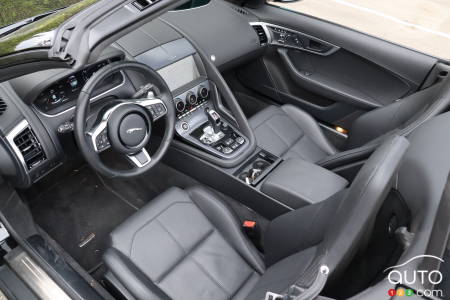 Photo: D.Heyman
2022 Jaguar F-Type - Cabin
The interior itself is not the flashiest affair, but it’s constructed with good materials and some little tweaks here and there to improve ergonomics. That’s important in a snug sports car like this. Jaguar has mounted the seats nice and low so that even taller folks like myself can live with it even with the top up. When down, meanwhile, they don’t have to worry about their forehead getting battered by wind as it juts out over the top of a windshield like a medieval sentry over the parapet.
Speaking of the seats, their adjustment controls are mounted to the door as opposed to the side of the cushion. That way, the seat can be made wider as they no longer have to allow room to shoehorn a paw between the seat cushion and door to make adjustments. It’s something Mercedes has been doing for years and why more manufacturers haven’t done a similar thing – I can think of only Jaguar and Genesis off the top of my head – I’ll never understand.
In order to both reduce clutter and make as much use of the limited dash space as possible, the central vents atop the dash stow away and only appear when active, and the climate control knobs on the centre stack serve as both your climate control and seat temperature controls. Simply press down on the button to swap between the two. I’m a fan.
I’m less a fan of the fact they’ve left a blue seat cooling icon on there even though my car didn’t actually have that feature. It’s no “call to subscribe for this feature” situation, though, and I’m sure most will get over that pretty darn quickly. 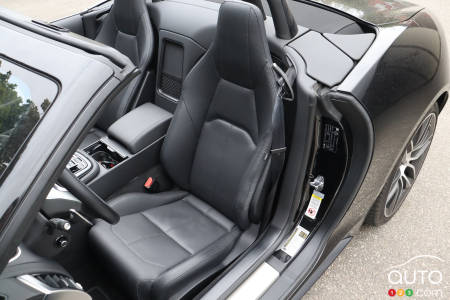 Photo: D.Heyman
2022 Jaguar F-Type - Seat
Indeed, once you plip that starter button and hit that go pedal, you’ll tend to forget about a lot of stuff pretty quickly – what time dinner is, who’s on Hockey Night in Canada tonight, the name of your first-born. Why? Because in addition to all that noise, acceleration is fierce. Your lucky passenger’s going to want to make use of the supplementary hand hold mounted to the right of the centre stack, that’s for sure.
That’s 0-100 km/h in 4.5 seconds, the quarter mile in 13.3 and a top speed of almost 190 km/h. These figures, of course, are likely only ever going to be crested on a closed circuit, but you don’t need numbers to tell you just how raucous it all feels. 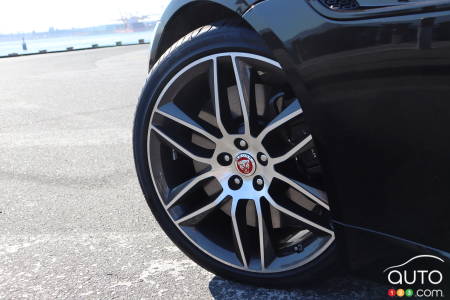 Photo: D.Heyman
2022 Jaguar F-Type - Steering wheel
The way the F-Type squats back on its haunches as you depress the throttle is almost muscle-car like, leaving the sensation that you’re piloting something that’s somewhere between a sports car and a motorboat with two V8s slung out back – that’s the RWD at work. I swear I could actually see that nose lift and while there probably was some of that, it looked a lot more just because of the rest of the fury around me.
The engine is one thing, but any engine can be hampered by a poorly matched transmission. Luckily, the 8-speed auto might be ageing but it’s good, delivering whip-snap shifts whether in auto or paddle-activated manual mode, and always finding the meat of the powerband. It may not be quite as fast as it sounds, but for everyday driving on everyday roads, it’s the bee’s knees.
I say “everyday roads” because one you start tackling the twisties, the feel changes a bit. You still have the acceleration needed for great hole shots out of tight bends – not to mention the weight saved over the AWD model. But the process going through those bends wavers. 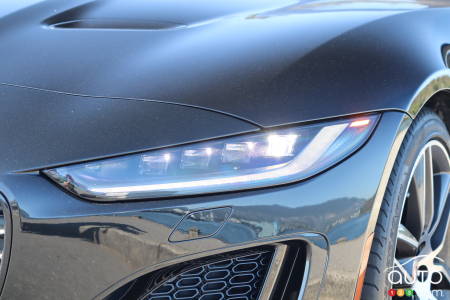 Photo: D.Heyman
2022 Jaguar F-Type - Headlight
It’s the strangest thing. I’ve driven a multitude of F-Types since the model debuted – in North America, on sun-baked driving utopias in Europe, on a frozen lake in Sweden – and I’ve always found them to be some of the best steers out there, this side of a Porsche Boxster.
With this latest model, though, it’s as if they’ve softened things to make it more tractable ‘round town. As a result, the steering feel through turns just isn’t there, forcing corrections where there shouldn’t be any. It reminds me a bit of driving a speedboat… just not in a good way, this time. The Boxster, Chevrolet Corvette and the BMW M4 all have better steering feel than this.
It’s not that the steering’s bad, really. The response is good and the turn-in is sharp, but you do need to learn to trust what’s going to happen – to just know – in order to compensate for the lack of feel.
It’s a real shame because the rest of the handling package is good. There’s very little body roll from the low, wide, fat-tired F-Type and it stays copasetic under braking as well, allowing for just a little tail slip in the more aggressive drive modes (selected by a nifty toggle switch). That’s something you want in a car like this.
Add the stability provided by the self-adjusting rear wing, and you’ve got a car that’s great to pilot. It just makes me wonder all the more: why rob some of that greatness by numbing the steering as they have? 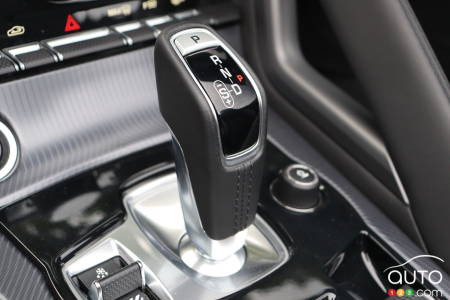 Photo: D.Heyman
2022 Jaguar F-Type - Gear shifter
I am still a fan, though. I like how raw the F-Type is, how true to its roots and how it’s a great representation of a car type not long for this world. That, of course, is both a blessing and a curse in this case but if you have just over 84 grand put aside (about the same price as a Boxster T, which makes less power) for a performance car of a type soon to lose its place in favour of hybrid four-bangers, then you could do a heck of a lot worse.
We like
Powertrain
Fantastic exhaust note
Interior functionality
We like less
Steering
Thirsty
Not as unique-looking as the old model
The competition
Audi RS5
BMW M4
Chevrolet Corvette Stingray
Lexus LC 500
Mercedes-Benz AMG C 63 S
Porsche 718 Boxster 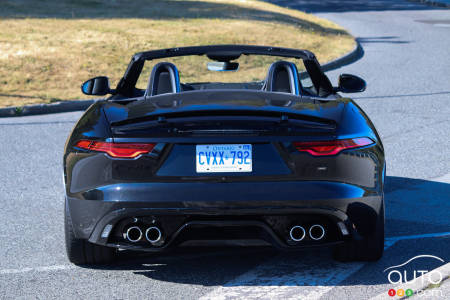 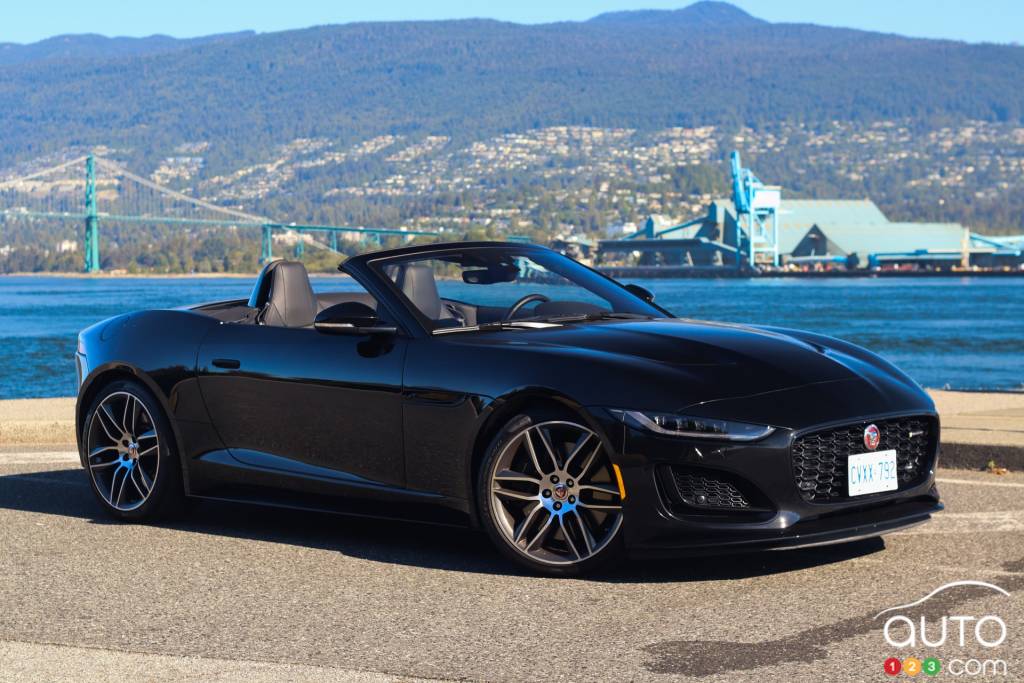 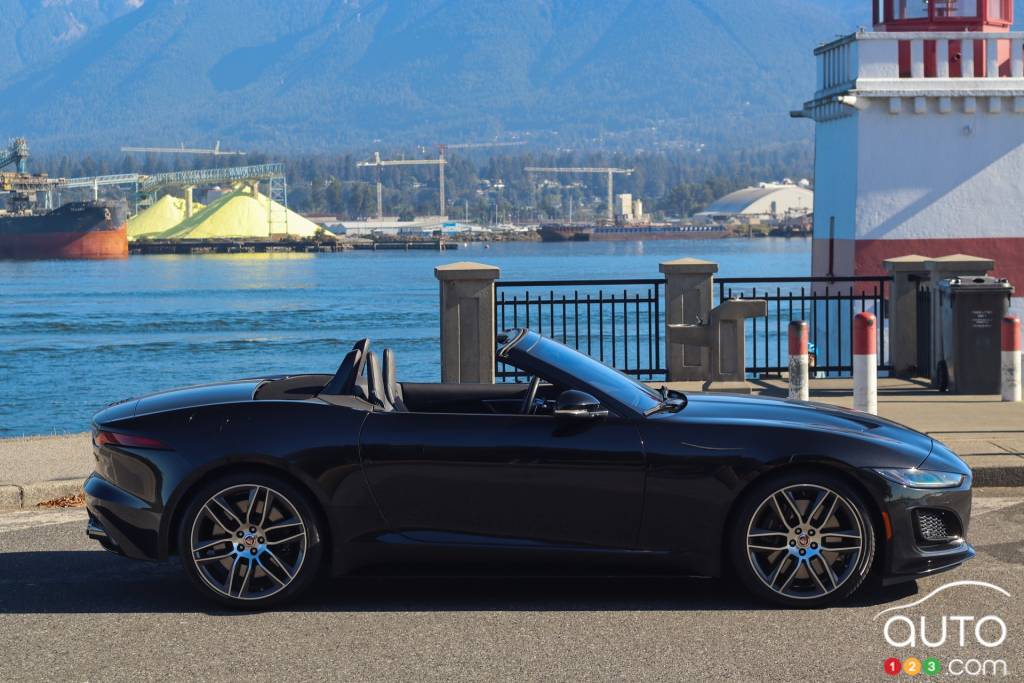 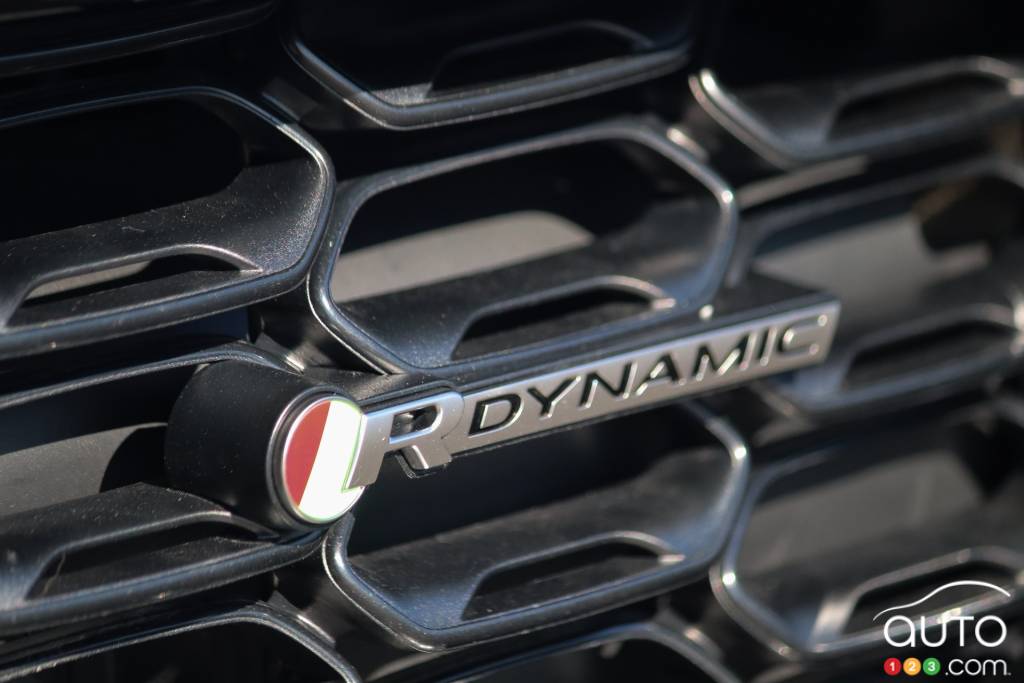 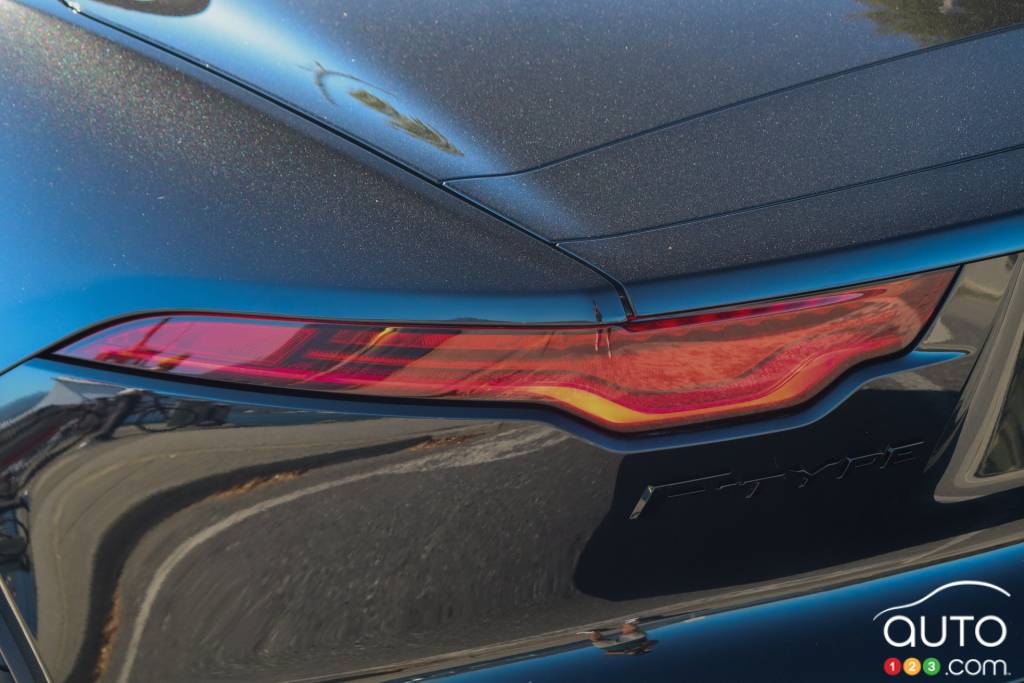 Hear – and See – the Sound of the Jaguar F-Type SVR

Jaguar has partnered with the Cymatics company to illustrate the unique and complex sound produced by the automaker’s 575-hp F-Type SVR. Check out the video ...

The 2022 Jeep Compass Trailhawk crossover, though relatively modestly sized, more than lives up to its Trailhawk name and don't let anyone tell you otherwise...