Lo and behold: with less than two weeks to go before the Los Angeles Auto Week, we’ve starting seeing a rash of “accidental” leaks of images and information about new models being unveiled there. The Jeep Gladiator is one of those models, and yesterday the FCA Group’s media site published official images and info on the model, before deleting the post. But not before some hawkeyed fans at an online forum downloaded and spread the photos.

Just the day before, photos of the new Ford Bronco/Baby Bronco leaked online. Either the manufacturers have some terribly leaky boats in their marketing departments, or… 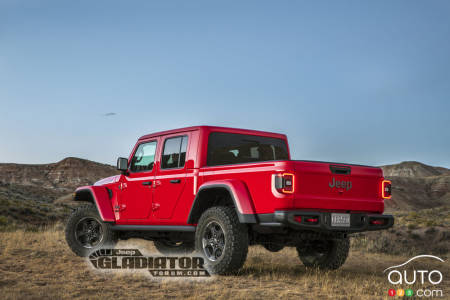 In any case, about those images. While they’re interesting for those impatient to discover the new Gladiator pickup, they don’t actually show us all that much that we didn’t already know. Spy shots of the camouflaged model have been circulating online for a while, and various bits of information published over the past few months have taught us much about the styling Jeep was giving its new pickup.

The images thus confirm that the model will import the basic lines of the new Wrangler, from front to back. What’s different? The wheelbase, for one, which is longer than those of the Wrangler Unlimited variants. Behind the cab sits a five-foot steel box.

As with the Wrangler, buyers will be able to order the Gladiator with a soft top or hard roof (in two options). The doors are also removable, and the windshield can be folded down. It’s easy to imagine this pickup, once stripped of non-essentials like doors and a roof, being right at home in the act of off-roading. 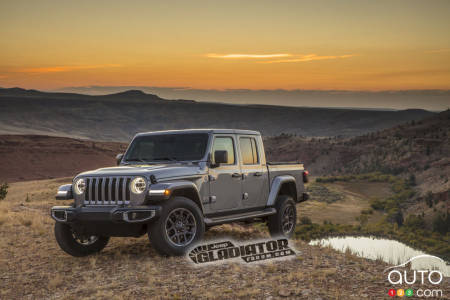 For the moment, it appears only a four-door variant will be made available, but it’s always possible a short-cab, long-bed version will be offered further down the road.

Leaked images notwithstanding, we’ll definitely learn much more about the new Gladiator when the veil gets lifted – officially this time! – at the Los Angeles Auto Show et the end of the month. Stay tuned… 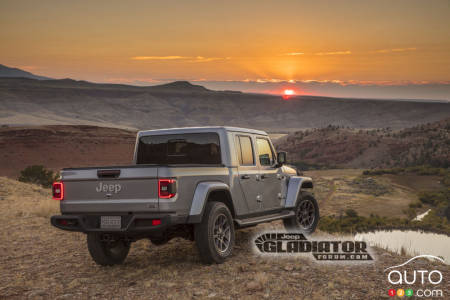 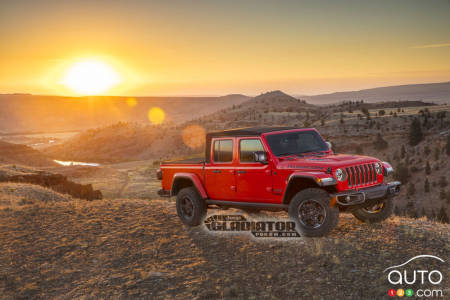 Subaru will be boosting the number of safety systems included as standard equipment in the 2021 Legacy and Outback models. Among them is a rear-seat warning ...

Honda Canada announces a recall of 53,770 over four potential different issues that can affect different models. The recall affects the Odyssey minivan and t...