Ford, as we know, has left the car market in North America. Apart from the Mustang, the manufacturer's lineup here is all about SUVs and pickups. Of course, this means that there’s room for other models within the family and one of them, if it was up to Ford boss Jim Farley, would be the European-market Puma ST.

Jim Farley has the reputation of being a genuine car guy, and he gave further proof of this by sending out a tweet about the Puma ST. In it he directly expressed his wish to see the Puma ST make it to the U.S. market.

In the tweet he also shared a 15-second video announcing the recent launch of the Puma ST by Ford's British division. 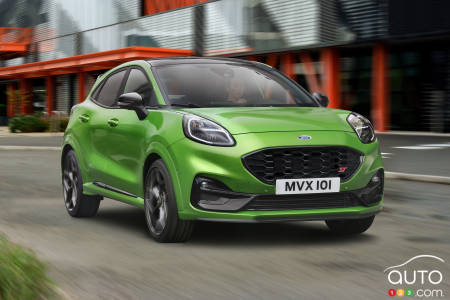 Launched in June 2019, the Puma is essentially the Fiesta’s European cousin. In the Ford lineup there, it slots in between the EcoSport and Kuga, better known as the Escape here. The model is available with either gasoline or diesel engines, but the lineup includes a 200-hp ST variant. It's that versions specifically that Jim Farley would like to have cross the Atlantic.

Could the Puma become the spiritual successor of the Fiesta ST in our country? It's not impossible, but it all depends on what Ford’s top management decides. Jim Farley may be the big boss, but such a decision has to go to the board and the vehicle has to be approved for our market. Then there’s it size. We can imagine it fitting in nicely in Canada, which does love its small vehicles, it’s less clear how warm a reception the Puma ST would get in the U.S., which tends to like its SUVs big.

To give you an idea of the model’s dimensions, the Puma is 15 cm shorter than the Toyota C-HR and about 15 cm longer than the Ford EcoSport. It is wider and less tall than the C-HR. In Europe, one of its direct rivals is the Nissan Juke, a model that is sadly no longer offered here.

Officially, Ford maintains that “there are no plans” to bring the Puma to North America, at least as reported by the Autoblog website.

Official denial on one side, a tweet by the boss on another. Fans of the genre will get to getting their hopes, of that we can be sure.

Ford Is Pulling its Transit Connect Van from North Americ...

Ford will discontinue the Ford Transit Connect in North America, according to Automotive News. The van will be taken off the market at the end of next year.

2024 Ford Mustang To Be Unveiled at Detroit Show in Septe...

The next Ford Mustang will reportedly be presented in Detroit in September. According to reports, the seventh generation of the model will then debut commerc...