We’ve reported a number of times in recent weeks and months about certain manufacturers pulling out of certain auto shows. The usual reason given, other than money considerations, is that manufacturers feel they’re better off revealing a product at times when nothing else is happening in the automotive industry, as it provides them with greater visibility.

In the case of Kia, the Korean automaker is actually planning on being present at major upcoming auto shows. This is not preventing them from taking advantage of the instant coverage the Internet provides to promote a new vehicle in an original way.

Take the new Telluride, a large SUV soon to take it place atop Kia’s product range. Fashion week
Kia chose New York Fashion Week  to introduce its latest vehicle. It partnered with designer Brandon Maxwell to give the upcoming SUV a lighter and more mass-market image. Maxwell even introduced and described the model during the presentation of his new Texas-inspired apparel collection.

Original marketing approach aside, attentive watchers may notice that the near-to-production model presented this week has been considerably altered from the concept version. Its lines have been softened, the front grille is bigger and thinner, and the headlights are larger. The angle of the D pillar is also more pronounced. The result is a vehicle that is less square in its overall shape than the prototype it is developed from.

We don’t know yet if changes have been made to the interior, but one thing we can be sure of is that the cabin will be able to accommodate eight occupants. Kia has confirmed what most watchers already knew, which is that the Telluride will be longer and wider than the Sorento.

The official debut of the production version of the vehicle will take place at the Detroit auto show next January. The Telluride will go into production later in the year and be available to consumers not long after that as a 2020 model. 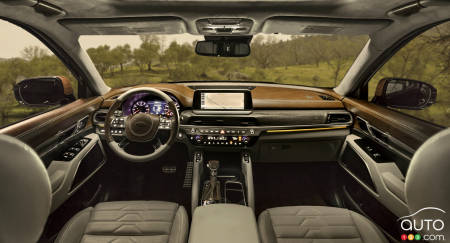 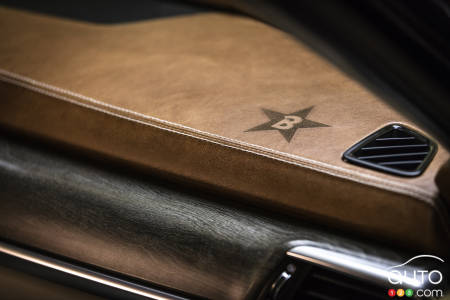