Kia announced a precautionary recall of 228,829 Sedona minivans (from the 2006-2010 model years) and Sorento SUVs (2007-2009) due to the small risk of a short circuit occurring that could cause a fire in the engine compartment. Of the vehicles being recalled, 15,238 are in Canada.

Kia estimates that approximately 1% of the affected vehicles may have moisture in the anti-lock braking system (ABS) module. The presence of moisture could cause an electrical short circuit, which in turn could lead to a fire. This problem could even occur when the vehicle is parked.

Kia has not yet determined exactly how and why moisture enters the brake system's electronic hydraulic control module. This is not the first time that this type of problem has led to a recall. Hyundai previously recalled 429,686 Elantra and Elantra Touring models for the same situation.

Because there are no basic defects to repair, Kia has devised a plan to reduce the risk of fire. Owners of vehicles identified in the recall will be asked to take their vehicle to a dealer to have technicians install a relay, which will turn off the electronic hydraulic control module when the vehicle's engine is shut off.

Kia will alert owners of affected models beginning April 10, 2020. Owners can consult the Transport Canada website for further details on the recall. 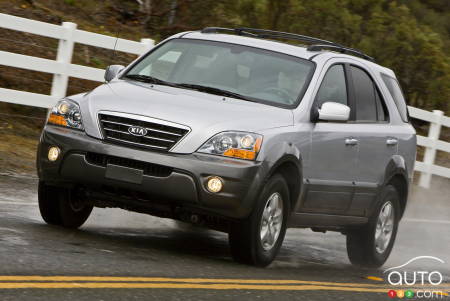 A bit more than 14,000 Kia Sedona minivans from the 2006-2012 model years are being recalled in Canada to fix a problem with the suspension control arms.