Today we hear news both good and bad from luxury automaker Lincoln. The good news is that a new report indicates that the company is developing an all-electric version of its newish Corsair SUV; the bad is that it won’t be ready before 2026.

For Canadians, the good news gets even better, if outlet Automotive News, which reported the tidbit, is to be believed. And that’s because the new EV will be built at Ford’S assembly plant in Oakville, Ontario. The outlet’s source is AutoForecast Solutions LLC, a global automotive forecasting company.

Sam Fiorani, vice-president of AutoForecast Solutions, told Automotive News that “at this point, we’re not sure if it will completely replace the Corsair or if there will be an equivalent gas-powered Corsair. But they would be on two different platforms”.

For now, the vehicle is being called the Corsair-E. As for the platform, there’s as yet no word on what it would be. Currently, the Corsair shares its structure with the Ford Escape, which is not offered in an all-electric configuration, suggesting the need for a new platform. However, since 2026 is still relatively far away, we can surmise that the next Ford Escape could also offer a new structure for electric vehicles.

Because five years separate us from the model's anticipated debut, it's too risky to make any bets either way. Wiser perhaps to wait to see what develops in the next few years.

Workers at the Oakville plant have good reason to be feel bullish about the facility’s prospects either way, however, because if this electric Corsair does go ahead, it will be one of several electrified models that will be manufactured there in the years to come. Late last year, Ford confirmed it will build five new electrified models at the plant over the next decade, with the first expected in 2025 and the fifth in 2028.

Note that Ford has not confirmed anything to Automotive News magazine or to anyone else regarding a Corsair-E, sticking to the standard platitude that it “does not comment on future products”. 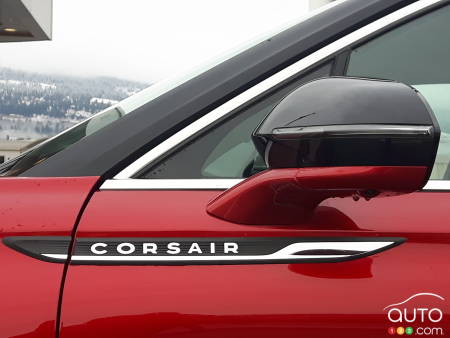 Auto123 got behind the wheel of the plug-in hybrid version of the 2022 Lincoln Corsair. Does it live up to its promise, and does it have enough to offer to d...