Some time ago, Hyundai recalled its Elantra and Accent models to fix a problem with the seatbelt tensioning system. The system can malfunction and explode in the event of an accident.

Initially, only a few hundred units were targeted. The campaign later expanded to thousands of vehicles, but now the company is going wider – much wider - and recalling 239,000 vehicles. The targeted models are the 2019-2022 Accent and 2021-2023 Elantra.

The problem
As with the airbags, the seatbelt tensioning system consists of a mechanism that deploys to lock the seatbelt retractors in place when a crash is detected. This prevents the belt from moving, keeping occupants in their seat. The retractors rely on small explosive devices. The small blast activates a piston that spins the seatbelt spool, forcing it to retract quickly and tighten around occupants, holding them in place before the airbags deploy.

In the case of the models affected by the recall, the system may not work as intended by Hyundai's safety department engineers. The danger is that an uncontrolled explosion can release shrapnel into the cabin. Sharp objects thus projected at high speed could potentially injure occupants. 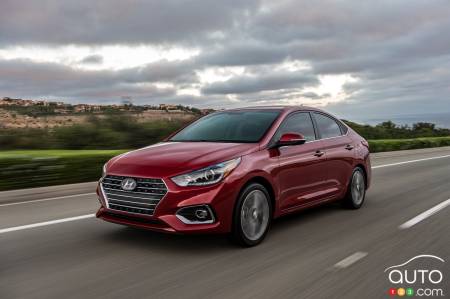 Hyundai says it is aware of three such incidents that have occurred with customer-owned vehicles. Two of them occurred in the United States (an Accent and an Elantra), the third in Singapore (Elantra).

The failures appear to be the result of microfractures in the feed pipe that attaches the gas generator (where the small explosion is triggered) to the voltage mechanism itself. Fortunately, the problem seems to be limited to the Accent and Elantra because of the way their structures behave in a crash. The same part, found with other vehicles, did not fail, according to Hyundai.

The discovery of what appear to be a design defect touching on the tensioning system has prompted Hyundai to expand the existing recall. Initially, it was believed that only a handful of defective parts were produced.

Hyundai is contacting Elantra and Accent owners to have the parts replaced with a modified model that includes a relief valve designed to prevent the mechanism from exploding in the event of an accident.

Hyundai is issuing a recall of over 26,000 vehicles due to a potential problem with the windshield. On some of the Korean automaker's 2020-2021 models, the w...