Mazda has confirmed its choice for which plant will build the new CX-30 SUV. The company says the Salamanca plant in Mexico will be updated so it can begin assembly of the newest member on Mazda’s roster.

The CX-30 is going to slot into that roster between the CX-3 and CX-4 models. Currently the Salamanca plant handles construction of the Mazda3, but production for that model will eventually be moved to Japan to make room for the new arrival. This confirmation came courtesy of Miguel Barbeyto, head of Mazda’s Mexican division.

An obvious factor in the decision to choose Mexico for production of the CX-30 is the free trade agreements that country has with several European and South American nations, not to mention with Canada and the United States of course. 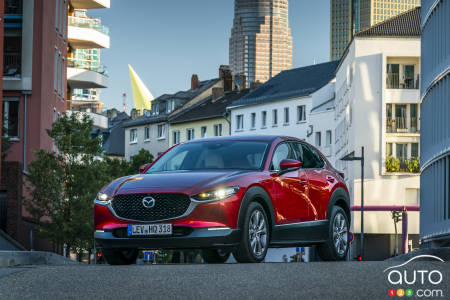 Anticipation is high for the newest Mazda, but no one is more impatient for its arrival than brand dealerships. In the U.S., Mazda has seen sales drop this year to date by 11.5%. A fresh new arrival in a popular segment can only help.

As for the Salamanca plant, it has an annual production capacity of 250,000 vehicles. In addition to the Mazda3, it also produces the Toyota Yaris and Mazda2 (sedans and hatchbacks). Mazda is also currently building an assembly plant in the U.S., conjointly with Toyota. At that new plant, each firm will build an SUV – neither of which have yet been identified.

The 2020 Mazda CX-30 is an all-new model come to fill the not-so-gaping void in the Japanese brand’s SUV lineup between the CX-3 and CX-5, because you can ne...

Mazda is celebrating its 100th anniversary with the introduction of special editions of its eight models. The models are designed for the Japanese market, bu...