We know that Mazda is working on a new inline 6-cylinder engine destined to equip some of its models in the next few years, including a redesigned Mazda6 repositioned as a higher-end product.

We also know that Mazda has been clear about its ambitions to define itself as a more upscale brand (in other words, where the profits are potentially vaster).

This week, a report out of Japan revealed some new details about Mazda's upcoming rear-wheel drive models powered by the new straight-6 engine in question. In speaking with Mazda's suppliers, the Nikkei media outlet learned that production of the new models will begin in 2022. Mazda expects to assemble approximately 300,000 units, which represents just under 20 percent of Mazda's worldwide sales, in the fiscal year ending March 2025. 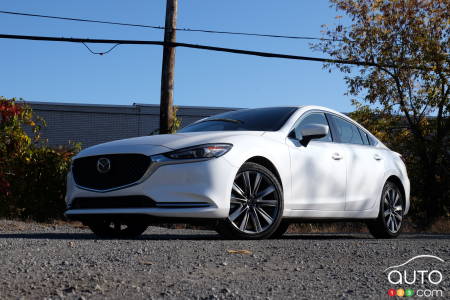 The report also indicates that the inline 6-cylinder engine would have a displacement of between 3.0 and 3.3L. It would also be configured for gasoline, diesel and SkyActiv-X (spark-free ignition) approach. A number of variants of these new engines can therefore be expected. It’s also probably safe to assume that one or more turbocharged versions will follow.

The first models produced on the new platform will likely be SUVs. These new utility models were originally intended to replace the CX-5 and CX-8 (a Japanese version of the CX-9 with smaller dimensions due to the Japanese tax system), but Nikkei now reports that they will be sold alongside the existing models. That could mean the arrival of a CX-50 on the market, for example, but that remains to be seen.

The new models will also be sold at a significantly higher price, according to the publication.

Is Mazda on the right track with this upward turn? Time will tell, and a lot of it because it will a long climb, but there’ no doubt greater diversity within the brand’s lineup won't hurt. While the models currently offered by the small Japanese automaker are interesting and reliable - as the latest Consumer Reports survey proved - they all look quite alike.