Mazda Canada has presented the automaker’s first all-electric vehicle to the country. The Mazda MX-30 was first shown to the world, you may recall, some 18 months and a seeming lifetime ago at the 2019 Tokyo Motor Show, held in October of that year. Now we get to see the model as it will be marketed within our borders. Note that that will happen starting this fall, and initially only in Quebec and British Columbia.

Mazda is underlining in bold that the MX-30, while it will be all-electric, is conceived to deliver the same positive driving dynamics motorists have come to expect from the brand’s cars and SUVs. New electric powertrain technology will deliver an output of 144 hp (or 107 kW) and 200 lb-ft of maximum torque. Mazda says it has made adjustments to its SkyActiv Vehicle architecture to deliver an optimal driving experience with the new EV.

The battery system of the MX-30 is built around a 35.5-kWh lithium-ion battery that can be charged to 80-percent capacity within about 36 minutes at a quick-charge station.

“The MX-30 is the first step in our multi-solution approach to electrification, which considers many factors and will allow us to continue providing the right products for our customers as market demands continue to change. The introduction of the MX-30 BEV will begin a shift to more electrified models, including a series plug-in hybrid with a rotary generator for MX-30, a plug-in hybrid for our new large vehicle platform, and a traditional hybris for our upcoming new crossover that will be built in the U.S.”

In terms of design, the images tell the story, but Mazda points out that the MX-30 reflects an evolution of the carmaker’s Kodo design philosophy, one that focuses on both futuristic innovation and maintaining a sense of familiarity. The exterior shell is relatively minimalistic, and there’s a definite touch of coupe-SUV-ness to the model’s roofline, which seems to slope downward more than it actually does thanks to the outer edges dropping off from the roof itself.

The interior is also minimalist, to a point anyways because we can expect the full range of modern tech and amenities and the buttons to access them. The floating centre console is new and features an electronic shifter, large command knob and shortcut buttons for those who prefer them. Also new is a 7-inch screen for controlling the climate control system.

Owners will be able to do a variety of commands remotely via Mazda Connected Services, such as locking the doors and adjusting the climate control, but also to check the battery charge level and charging status.

Once the MX-30 BEV is with us, Mazda says it will be launching the PHEV model, which will mark the return of the company’s rotary engine tech after almost 10 years away. But the system’s main function now will be to replenish the battery pack instead of powering the wheels. This means that the PHEV version will always be on electric mode; the difference is that unlike with the BEV, which has no such rotary engine to work its battery pack, you’ll be able to charge the PHEV while you drive.

For the moment, there’s no word on pricing, but we expect that to come as the launch date for the model approaches. 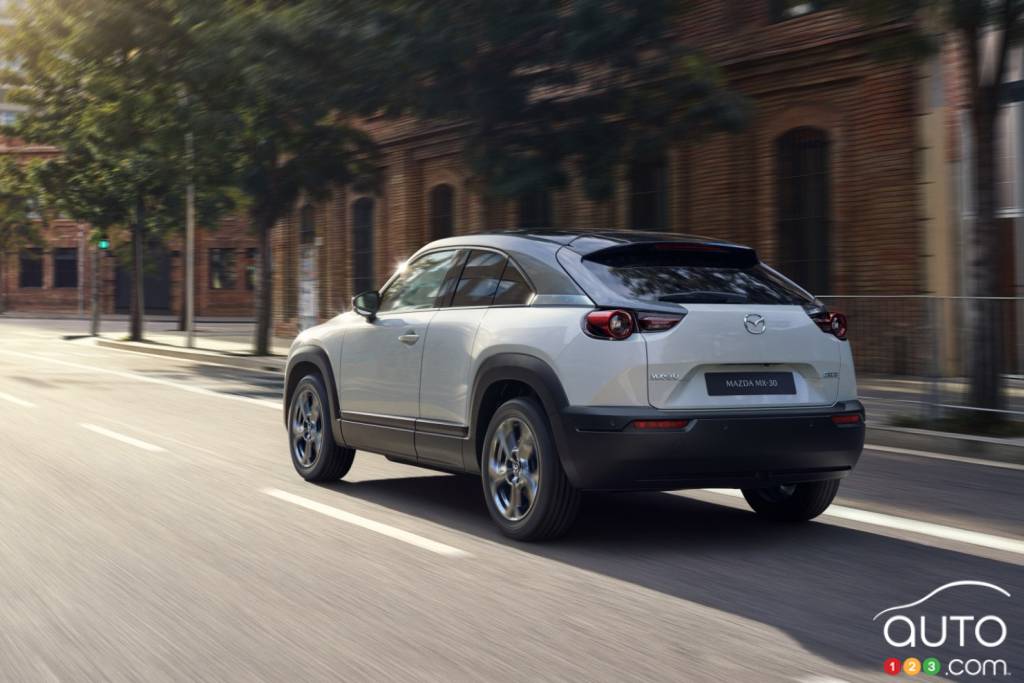 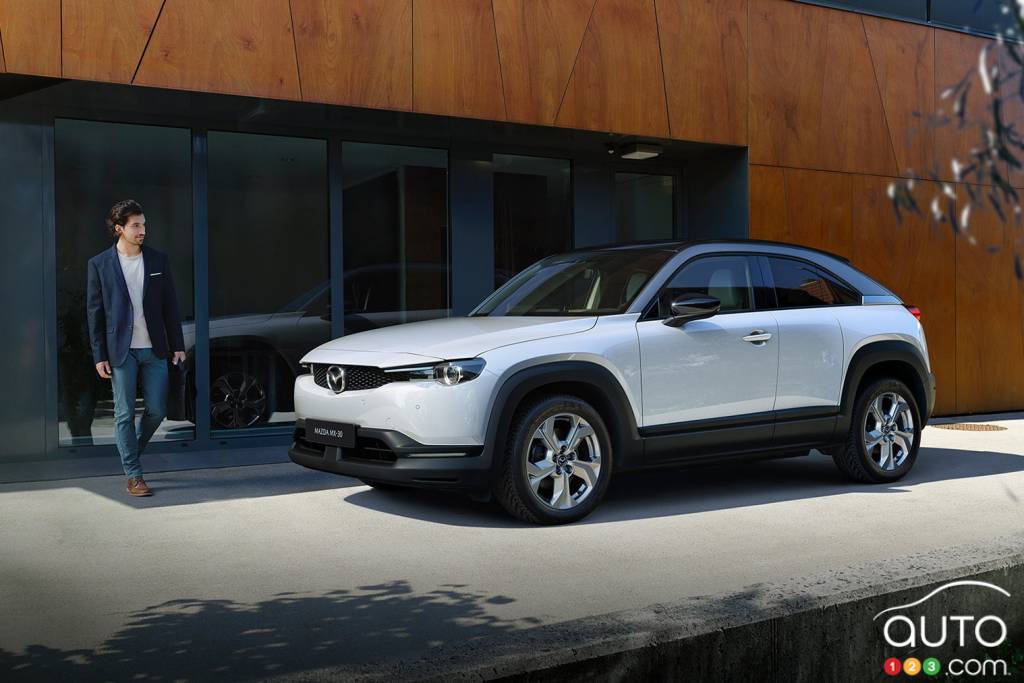 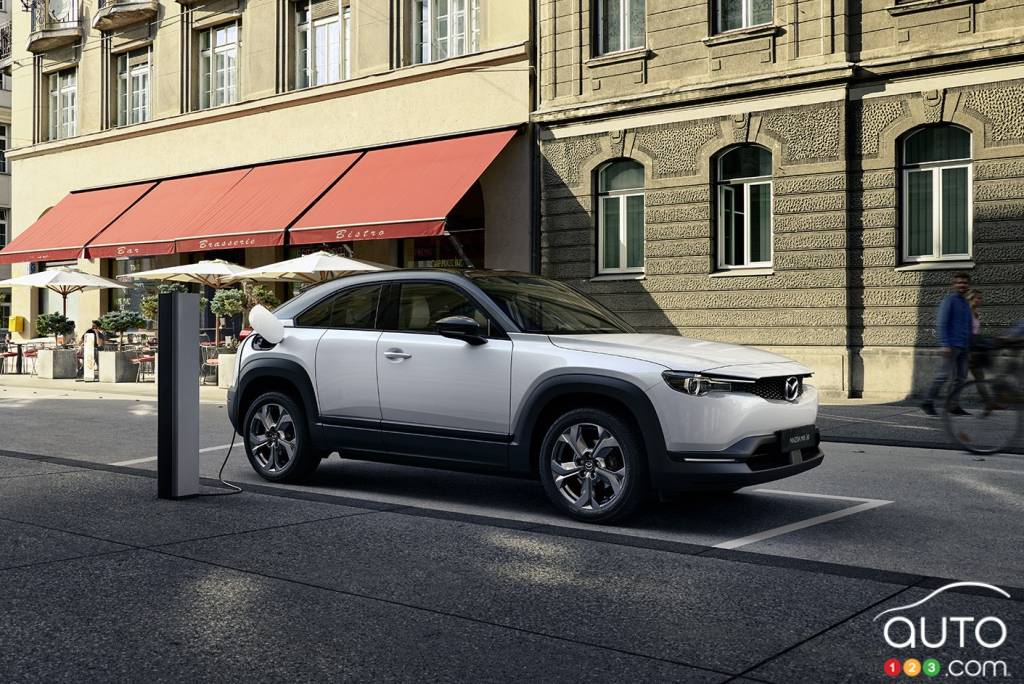 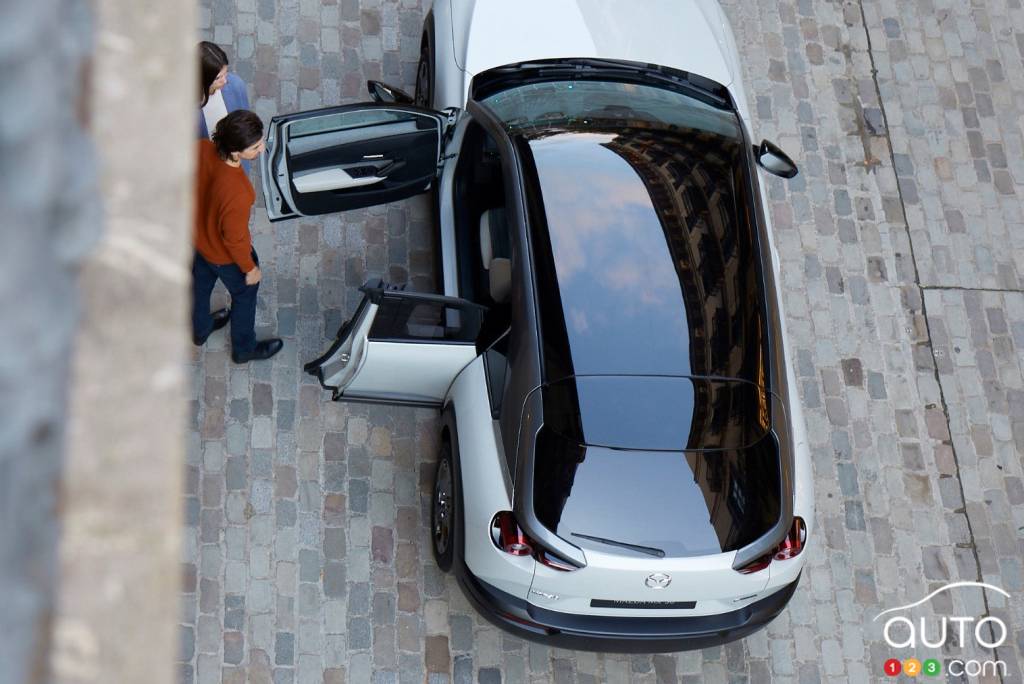 Mazda MX-30 PHEV Coming Our Way with a Range-Extending Ro...

Mazda’s MX-30 has gotten kudos for its cute looks and driveability, but many thumbs-down for the measly 161-km range it offers. Now, Mazda says a limited qua...

The 2022 Mazda MX-30, the first all-electric vehicle sold in North America by the Japanese brand, has its qualities and it has its flaws. We took it in hand ...

The 2022 Mazda MX-30 marks the Japanese manufacturer's tardy arrival in the all-electric universe. But instead of following late-guest tradition and giving a...