Last winter, a few weeks before the COVID-19 pandemic invaded Canada, I hit the road in direction of the Laurentian mountains north of Montreal to put to the test a new winter tire developed by Michelin. The X-ICE SNOW tire had just landed at various tire retailers across the country.

In fact, the new Michelin tire, which required three years of development on Canadian soil by the way, will gradually be called upon to replace the X-ICE Xi3 and X-ICE Latitude Xi2. By fall of this year, those two models will have been replaced by this new-generation winter tire manufactured at the Michelin plant in Granton, Nova Scotia.

As it happened, on that day of February 27th, 2020, nearly a foot of snow (more in some places) sat on the ground, having accumulated overnight. How extreme was it? It almost caused the cancellation of an event meant to test out a winter tire! Actually, that was mainly because the driver of the bus hired to get participants from St-Sauveur to the Mécaglisse Complexe in Notre-Dame-de-la-Merci wouldn’t take a chance on transporting us. The road conditions were that awful.

This situation forced organizers to review the program of the day. We managed to get to the track for some testing, but let’s just say the schedule was shortened quite a lot. While I had a lot of fun driving in these snowstorm conditions, the fact remains that a full winter season presents drivers with a range of conditions. 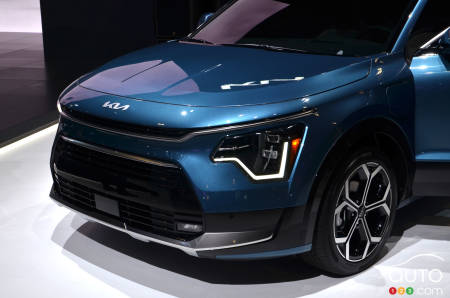 This led me to contact the folks at Michelin to find a set of tires for a 2007 Subaru Legacy GT Spec B, which I had picked up for myself last May. A reasoned investment, I should add, since the car belonged to a friend who I know takes good care of his cars…

Over the summer months, I familiarized myself with this classic car of the 2000s. The Legacy GT Spec B remains a fairly rare sedan in Canada, but I can tell you it’s comfortable, agile and powerful enough to satisfy my performance needs, without sacrificing the practicality of a family sedan. When I purchased the car, I chose not to get the winter tires that were offered with the car since they were studded. I wanted to go the un-studded route for a quieter experience.

And since I had been impressed by Michelin's new winter tires on that winter driving day the previous February, the choice became more and more logical to get the X-ICE SNOW on the old Subaru in time for winter, because that’s the season, after all, when a Subaru shines brightest.

As it happens, my previous two used cars had come fitted with a set of Michelin winter tires, in both cases the previous Michelin X-ICE Xi3 model. These, although not as grippy in snowy conditions, still constituted a good compromise for use in a setting like the greater Montreal area.

A totally new tire
Tough the X-ICE SNOW name suggests that the new tire line is a modified version of the previous model, it is not. Michelin engineers wanted to improve the performance of their mainstream tire on snow, while maintaining its bite on ice. The new FleX-Ice 2.0 compound has been redesigned to better grip the road whether on icy, snowy or even slushy roads. This compound is very flexible in colder temperatures, but quite firm when the temperature is milder.

The new tire footprint is not only more aggressive – apparently, consumers want a more rugged look –, but it also more durable, with the wide sipes still apparent when the tire is worn. In addition to this feature, the tread of the tire is given enlarged grooves towards the outside, which helps with evacuating snow and water, while the serrated and variable-thickness sipes improve the performance of the tire in winter.

Over the next few weeks, I’ll be testing how the Michelin X-ICE SNOW reacts on different surfaces (ice, snow, slush, asphalt, etc.) and see if it constitutes a proper replacement for the two previous models of the X series. I’ll be giving you a full report on this new winter tire later on this winter. In the meantime, stay safe on the road! 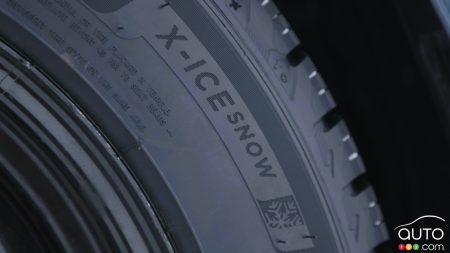