Automakers often try to outdo each other in finding original ways to launch marketing or promotional campaigns for new models, in the hopes of attracting the most attention possible. Mini has just scored a nifty way to announce the new all-electric Cooper and show off its capabilities.

Those capabilities, according to the new video released by the BMW subsidiary, include towing a Lufthansa Boeing 777.

The new Cooper S E electric car may be small – it is a Mini after all – but it’s being pitched as a big performer. The video shows it managing to pull the enormous plane it’s tethered to. It’s clearly a struggle initially, but the laws of physics and inertia make it that once the big beast is in motion, the rest is (almost) a breeze.

While scientifically the feat is nothing all that exceptional, it certainly makes for spectacular visuals, and it does make the point that an electric-powered vehicle can benefit from inexhaustible torque.

BMW is clear in fact that the video is intended to show what the car can do and that EVs can have brute strength like any other vehicle. The company has promised similar spots leading up the launch of the model.

The new Cooper S E electric car, which will borrow the BMW i3’s hardware except that it will be FWD, is set to make its in-person debut in Frankfurt this coming fall. 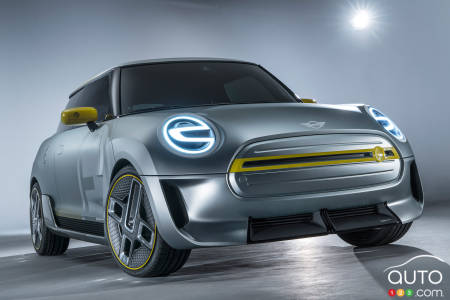