More on that a bit later on.

There’s a whole lot more that tends to go right over the heads of us common mortals, the consumers. But one thing in the distinct world of RVs is just as it is in the automotive domain: the milieu is evolving rapidly and manufacturers are taking giant leaps at innovation, producing vehicles that reset the limits of what we’re used to.

This is an apt description of the Montecarlo FB21 designed and built by Quebec company Gala RV. 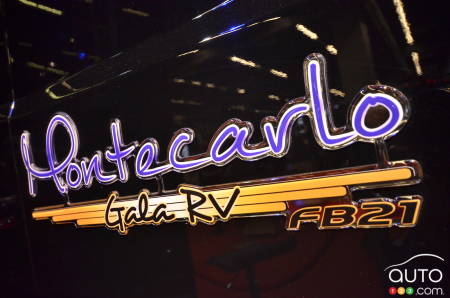 Bye bye wood
The Montecarlo FB21 breaks the mould by being the world’s first RV conceived and built without the use of wood for the interior structure.

Whoever’s gone camping in an RV knows how much wood can degrade over the years. Humidity, our rough Canadian climate, water infiltration: wood doesn’t take kindly to any of these factors.

In developing an RV that makes use of composite and fibreglass materials, Gala RV offers consumers a product that, almost by definition, will be much more durable.

That it’s the creation of a Canadian company makes it all the more exciting an achievement. 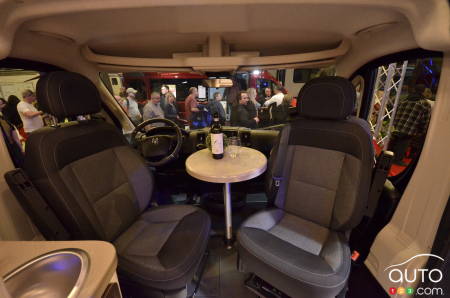 A long process
The Montecarlo model has been on the market since the turn of the present decade, but it was only in 2014 that the idea of producing a wood-free version took hold in the mind of Richard Galarneau, founder and president of the company. Three years passed before the research and development phase of the project got underway. Explains Richard Galarneau:

“We defined the list of ultra-light synthetic materials to be used for this RV. Followed a long process of manufacturing, by hand, the necessary moulds and developing the single-piece prototypes that would be used for the final assembly”.

A year-and-a-half later, the product was on display at the Montreal RV Show in late February. 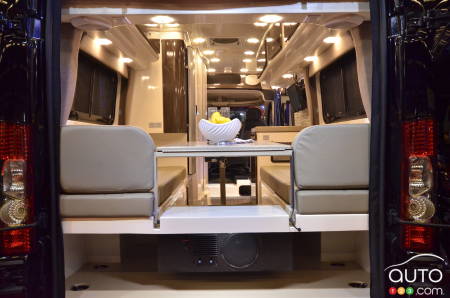 Great response
The Montecarlo FB21 proved one of the star attractions of the show; that should be repeated in Quebec City this weekend as the RV show makes a stop there.

Visitors who got to see the RV up close had good things to say about its overall quality, and the company closed a number of sales on the spot. Clearly, consumer interest in strong in the concept, the idea of enjoying an RV without dealing with the problems inherent in the use of wood is a compelling sales argument.

The Montecarlo FB21 comes with a $134,950 price tag attached, which can seem like a princely sum for those less familiar with the RV domain but falls into a competitive range with similar models on the market. 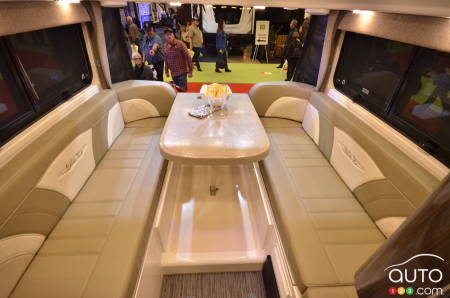 Ram ProMaster
Being products of the automotive domain, we couldn’t help but ask Gala RV what led them to choose the Ram ProMaster over another product like the Mercedes-Benz Sprinter, for example. The explanation provided by Gala RV GM Jessica Galarneau was an interesting one.

She told us that when an RV model is being conceived, different products are considered and the interest shown by manufacturers is always important. In this case, the company had first worked with a Nissan NV during the early stages of the project. But when the Ram ProMaster came on the market, the choice was made to clear the deck and go with it instead.

There were a few reasons for this. First, because of the FWD configuration of the product, the absence of a drive shaft between the rear wheels and the engine meant that the floor is lower. Obviously this presented advantages in creating more space, but also in making it easier to enter and exit the RV. Given the average age of the RV user, this was a factor not to be dismissed. 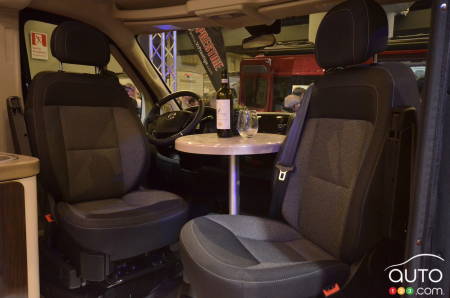 The panels of the Ram ProMaster are also straighter, making it easier to install cupboards to hold things like dishes. The use of the Mercedes-Benz Sprinter, for example, would have required sacrifices in that area.

And Ford in all that? Explained Jessia Galarneau, “the hand brake located to the right of the driver’s seat means that that seat can’t pivot. This product simply wouldn’t have been practical”.

And so, the Ram ProMaster was deemed the best choice for the Montecarlo FB21. 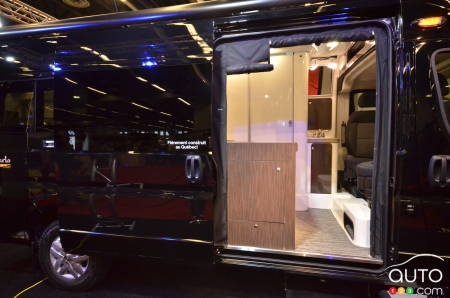 Distribution
For the moment, the Montecarlo FB21 is distributed only in Quebec, by the VR Prestige Company. The firm, however, intends to expand its reach into the rest of Canada, with the American market further off on the horizon.

With such an innovative and unique product to sell, not to mention one of undeniable quality, Gala RV definitely has an interesting sales pitch to make.

You can find more information about the RV and the company behind it be visiting its website: www.GalaRv.com.

On a May the 8th, Quebec race-car legend Gilles Villeneuve, hero to a people, met a tragic end at the Zolder racing circuit in Belgium. That was in 1982. Alm...