Volkswagen is currently working on completing the eighth generation of its popular Golf model, and is expected to debut the car officially at the 2019 Geneva auto show in March.

Ahead of the big reveal, rumours have duly started circulating as to the details of the next-gen Golf. No one is expecting any radical changes to what has been a spectacularly successful design, but some bigger changes are anticipated in regards to the car’s mechanics.

According to German publication Auto Bild, the next-generation Golf GTI will get a base 245-hp 4-cylinder engine. Consumers wanting more punch under the hood will however be able to opt for a 300-hp engine, which is slightly more than found in the current Golf R. Which of course leads us to think that this latter version will also get a power boost when its turn comes for a refresh.

In the case of the GTI, it will retain its front-wheel-drive configuration, leaving only the R version to offer AWD. 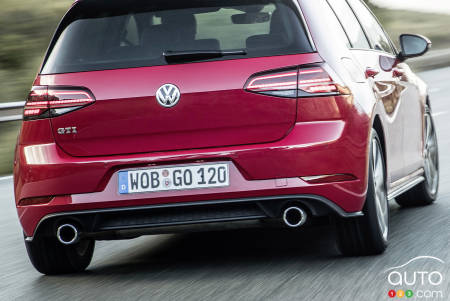 Esthetically, Auto Bild reports that the GTI will be quite distinct from the regular Golf, particularly by sporting a unique fascia, larger air intakes, a rear spoiler and dual exhaust tips. The model will also continue to feature red accents both inside and out.

The interior of the GTI will integrate Volkswagen’s Virtual Cockpit in lieu of the tradition instrument cluster, as well as a lap timer and a g-force meter for those who take it on to the track.

The next-generation GTI is expected to make its debut at dealerships in 2020.

Images of the production version of VW’s Atlas Cross Sport have spread online after first being posted on a Chinese website, revealing a two-row SUV whose li...