Starting with the ground-breaking LEAF model in 2011, Nissan has been a pioneer among mass-market automakers when it comes to electrification. This year, Nissan plans to launch the promising all-electric Ariya SUV model.

Today, the company announced that, by the early years of the next decade, all new models in its lineup of most key markets will be powered entirely by electricity. This objective is part of the company’s larger goal of attaining carbon neutrality by 2050.

Nissan has already said it will be focusing on the Japanese, Chinese, North American and European markets, and promises to continue with its innovative work in the EV battery domain, notably regarding semi-conductors. It will also prioritize work on its e-POWER hybrid technology that will help it improve energy efficiency.

“We're determined to help create a carbon-neutral society and accelerate the global effort against climate change.”

The automaker’s plans have echoes throughout the automotive industry. Many if not most automakers have made similar commitments in recent months, all with the ultimate goal of reducing their environmental footprints. In Japan, authorities have said they want to eliminate new combustion-engine vehicles entirely by the mid-2030s, and we’ve heard similar pledges made here in North America, notably by the province of Quebec.

It’s not the first time we say this, but it now is becoming reality: the 2020s is going to be a decade of radical transformation in the automotive industry. 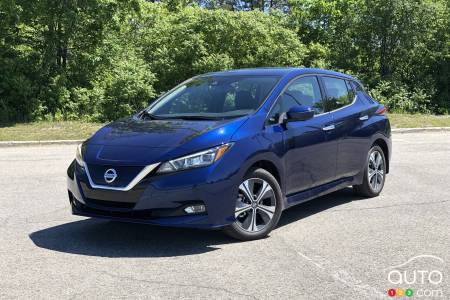 Nissan Wants 40 Percent of U.S. Sales to be All-Electric ...

Nissan has announced that it wants 40 percent of its sales in the US to be all-electric by 2030. For now, the LEAF sits alone in the Japanese automaker’s lin...