The Mercedes-Benz G-Class has the very big quality of being utterly unique within the company it keeps. Since the German luxury automaker started making the SUV in 1979, its styling has changed hardly at all – which ironically may be one of the reasons for its success. Call it the Wrangler formula.

While there have been some refinements over the years, particularly when it was revised in 2018, the drive it delivers remains retro – as do the fuel consumption figures it inflicts. On the other hand, when directed off-road it is hard to beat. And of course, there’s that distinctive styling, which never seems to come into or go out of style. It just is. And it helps explains the model’s iconic status.

To wit, the company behind it has just celebrated an important milestone in the G-Class’ career: production of the model’s 400,000th unit. In the interest of accuracy, the vehicle was actually built by the Magna Steyr company (which handles manufacture of the model; Mercedes-Benz takes over from there to sell the things) at its plant in Graz, Austria. That’s also where the 300,000th unit of the G-Wagon was built, by the way.

This is no milestone attained as the model peters out to the end of its life, let’s be clear. Because everything that should sabotage the model’s performance on the marketplace – its untrendy looks, its high price point and fuel consumption – works in its favour instead. So much so that Mercedes-Benz says it can’t produce them fast enough to keep up with demand.

Ya gotta wear shades
The future’s looking pretty bright as well, especially since Mercedes-Benz has made clear it intends to create an all-electric version at some point in the coming decade.

As for that 400,000th G-Class produced recently, well it’s going to the home of a client in Germany’s Rhineland region, who happens to already own about 20 G-Class SUVs.

Think maybe this new one won’t see too much action? 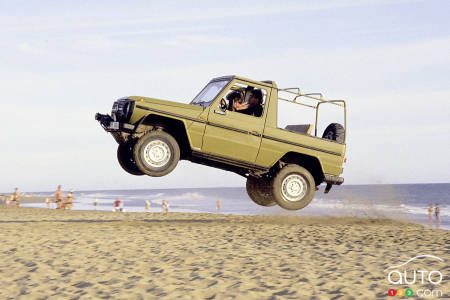 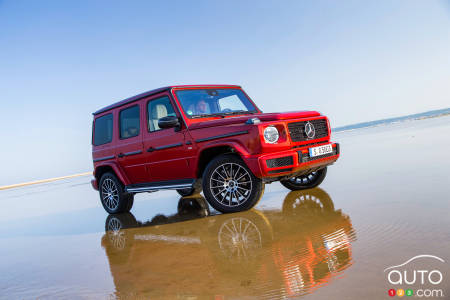 Mercedes-Benz has officially presented the 2023 EQS SUV all-electric model, coming to market in Canada in the last quarter of 2022. It’s the third model to b...

The aggressive looks of the 2022 Mercedes-Benz GLE 450 Coupe are a bit misleading, given the SUV’s practicality and smooth ride. That said, there’s a ton of ...