Rivian has yet to deliver a single vehicle, but it continues to be active and in the news. The company is set to introduce the R1T and R1S models before this year is out, and it has now applied to trademark to more names. And so begins speculation as to what T1V and R2X might refer to.

Rivian took pains to explain that trademarking a name doesn’t necessarily mean they refer to new products in development or on the drawing board – which is of course a par-for-the-course statement in the car industry. Still, there’s reason to be curious.

The R1V, for one, could become a for-public-consumption version of the van the company is working on for Amazon, which has a pre-order of 100,000 for that delivery vehicle. Rivian could want to develop a variant designed to transport passengers, destined for example as use for shuttles that carry travelers from airport to hotel and back. Such a model could share its internal organs with the forthcoming R1S and R1T models; both of those models will develop 750 hp from their four electric motors (one per wheel).

As for the R2X name, it could refer to a smaller – and presumably more affordable – vehicle. This is pure speculation, but it’s not hard to imagine Rivian might be tempted to produce a small AWD SUV. Time will tell.

In the meantime, deliveries of the R1T pickup and R1S SUV should get underway before the end of 2020. If things go according to plan, Rivian could well have some announcements to make regarding new models before the calendar flips to 2021. Maybe they will have to do with the future R1V and R2X EVs. 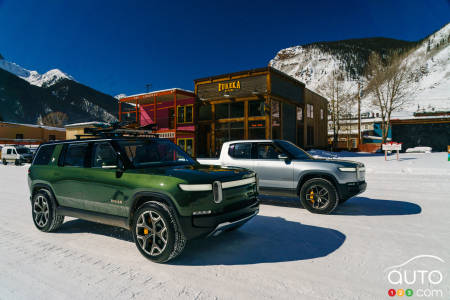 Photo: Rivian
The R1S SUV and the R1T truck from Rivian

Rivian’s Electric Trucks Will Be Able to Charge Each Other

When Rivian’s all electric pickup trucks make their debut next year, they will be able to charge each other. The tag-team concept is for one truck to be able...