When the Tesla Model 3 was first announced a few years ago, company boss Elon Musk promised that there would eventually be a $35,000-USD version of it made available. He also specified that initially the company would market more-expensive versions, in order to help make the venture profitable.

That promise has been kept, as the company is now taking order on the base Model 3, which will soon start to roll of Tesla’s assembly line. The automaker estimates that deliveries will begin in two to four weeks to American customers.

The base Model 3 will have a range of 354 km (220 miles), slightly less than what is currently available from similarly priced competitors. The Nissan LEAF PLUS, the Chevrolet Bolt and the Hyundai Kona electric have ranges of 363, 283 and 415 km, respectively. 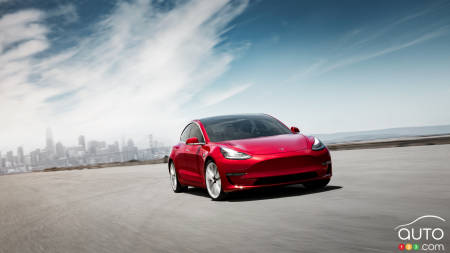 Inside, the base model gets noticeable less of a luxury environment than the higher versions already available. A $2,000 Standard Range Plus package does add a few more features to the interior.

The war currently raging in the electric-mobility domain is intensifying, and with the introduction of a more-affordable Model 3 (it will cost around $47,500 in Canada), Tesla is shoring up its flanks against the offensives being launched by the mass-market auto manufacturers.

There will be much jostling and jockeying in the next few months, no doubt about it.