The technology isn’t new, exactly, but it is not common either. Within a few years, however, systems using thermal imaging cameras could become as widespread as backup cameras are today. The system allows drivers to detect, via an infrared camera, heat radiated by people or animals some distance away from the vehicle.

For the moment, this technology has been implanted in a few luxury models. As well, manufacturers use it in their drive assist systems and autonomous-driving pilot projects.

Starting next year, Volkswagen’s new Touareg will incorporate a system using the technology. You’ll remember that the model is destined to the European market only, and it unlikely to make it across the Atlantic. But no matter, the technology is what interests us, as it is a near-certainty that it will find its way into other vehicles before too long.

The thermal imaging camera allows for identifying pedestrians, cyclists and larger animals at distances between 10 and 130 metres (32 and 426 feet) away when driving at night. Those distances are farther than what is visible to the eye with a vehicle’s headlights.

Any detected person or animal is located by the system, which can even predict the trajectory of the organism. If it detects that that trajectory could bring it into the path of the vehicle, and if the vehicle is traveling at over 50 km/h, that information is transmitted to the driver via VW’s virtual dashboard that replaces the traditional instrument panel. If the vehicle is traveling at less than 50 km/h, a red warning light appears to warn the driver of the potential danger. If a head-up display is in active use, a beep is heard to accompany a red signal in the driver’s line of sight.

This system is not infallible, but it’s clear that it can help give drivers more time to react to potential collision risks at night. In such a situation, when a pedestrian or animal appears seemingly from nowhere, a few fractions of a second of extra time can mean the difference between a close call and a collision. 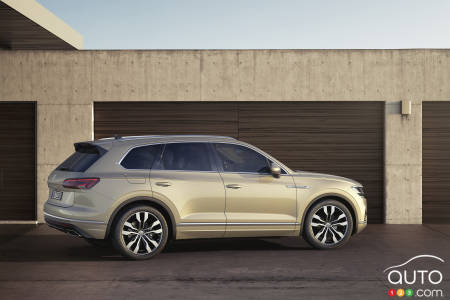 The Volkwagen has made public the first information about its next-generation Touareg. The luxury SUV will be produced for the Chinese market, but there’s no...

Volkswagen's latest security system has been honoured at this year's BusinessCar Techies Awards with the advanced electronic Intelligent Key being named Best...