Over the last decade, we’ve seen some pretty incredible technologies introduced in vehicles, and the pace of innovations seems only to be increasing with each new generation of models.

The advances are coming so quickly, it’s a challenge even to guess what might be next. Many try, of course, particularly in the field of autonomous vehicles, in which the possibilities seem endless.

Here’s a twist on the concept that many may not have thought of. Toyota is currently looking at the possibilities of developing a hitchless towing system.

What’s that, you ask? Well it’s more or less what it sounds like. One vehicle pulls another without the two being physically attached. In a video showing a rudimentary system at work, we can see two Sienna minivans demonstrating it. The first vehicle dictates the pace and direction, while the second one, equipped with an artillery of sensors, follows obediently.

Realistic for real-world use? Maybe not for the moment, but who knows about in the future. One could easily imagine a square trailer, a box, whatever, being equipped to trail around behind a vehicle.

This concept raises a few obvious problems, for instance the risks of theft and “hacking”, and the safety risks involved with any autonomous-drive system. But, would it be more risky or less risky than current trailers?

You can be sure we’ll be asking our friendly Toyota representatives all about it at the next Toyota event! 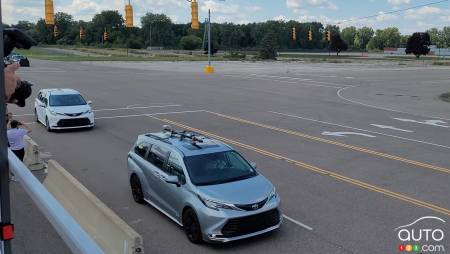 Toyota and Aurora Are Testing Self-Driving Vehicles in Texas

Toyota and Aurora are currently testing self-driving vehicles in Texas. Whether we like it or not, this technology will eventually see the light of day and b...

Vehicles with Steering Wheel Optional, as early as 2025?

According to some observers, self-driving vehicles could be delivered to us without a steering wheel by 2025. Is this a true picture? If the technology is he...

Toyota Has a Patent for a Mobile Recharging-Refueling Sta...

Toyota has recently filed a patent application for a mobile tanker that can refuel a vehicle’s tank or recharge its battery pack. This stand-alone service st...