The new Volkswagen BUDD-e, an electric concept that first appeared at CES in January, made its North American debut yesterday at the 2016 New York Auto Show. It’s the first car based on the all-new electric modular platform known as MEB, which was specifically designed for plug-in vehicles.

The BUDD-e concept’s interior is all about connectivity. The human-machine interface (HMI) is nothing but touch-sensitive controls, along with voice and gesture recognition, thus eliminating physical buttons and knobs.

Offering a range of about 533 kilometres, a futuristic design, and a remarkably clean driving environment, the BUDD-e also promises to deliver the performance and sporty dynamics Volkswagen is famous for. 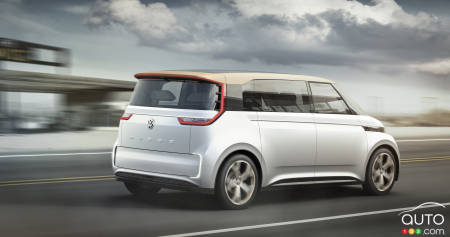 The 2016 Volkswagen Jetta GLI Autobahn really is a practical, do-it-all compact sedan when needed, and an autocross track star when wanted.

People always ask me, “What should I buy for my next car?” I should start recommending the Volkswagen Golf Sportwagon. I’m sure they won’t be disappointed.