The company won’t say what it is, so barring more teasers it will be a surprise Automotive columnist: Derek Boshouwers , Updated: 2022-12-30

•    Volkswagen will present a new all-electric model at CES next week.

•    The model will be camouflaged, so it’s clearly not a finished product.

•    Speculation is it could be the ID. Aero concept introduced last summer.

Volkswagen confirmed this week it will present a new all-electric model at the Consumer Electronics Show (CES) in Las Vegas next week (on January 3rd to be precise).

The German automaker is sharing no other details about the model, least of all its name or even its format. There’s speculation it could be the ID. Aero concept first shown last summer, or at least a more evolved version of it. 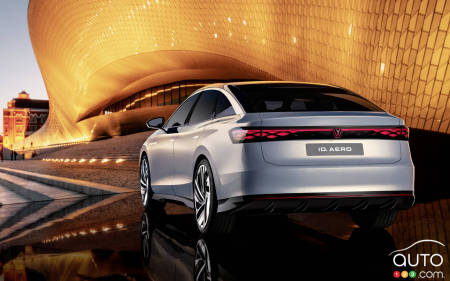 It won’t be a fully evolved model, however – Volkswagen says the model being shown will be camouflaged, so we’ll only discover the general shape of the EV as well as a few other design details.

Volkswagen has said it aims to launch the ID. Aero all-electric sedan commercially in the second half of 2023, making it a logical choice for a presentation at CES. If it’s not that, however, we could see the wagon long rumoured to be in the works (unofficially known as the ID.7).

A quick refresher is in order regarding VW’s ID line of BEVs: Europe has the ID.3 (essentially the all-electric counterpart to the Golf), we have the ID.4, there’s a coupe version of that model called the ID.5, for now marketed only in Europe, and the ID.6 three-row SUV is available only in China. Then there’s the ID. Buzz van, set to launch in North America sometime later this year.

Stay tuned for the CES reveal next week.

A fully functional Project Arrow EV Concept has been unveiled. The Canadian-designed and -built EV, 97 percent of the components of which are made in Canada,...