Yesterday, we very nearly reported on a bit of news that had been circulating for 24 hours about a name change for Volkswagen in the United States. It appeared the automotive giant was planning to change its name there to Voltswagen, reflecting the company's electric shift.

This week being this week, we were skeptical and refrained from publishing anything. We will admit we almost posted a piece yesterday, in the wake of the automaker confirming the story online, complete with graphics, on Twitter. But, we were very cautious; it sounded like April 1st approaching.

In the event, the whole thing misfired completely. 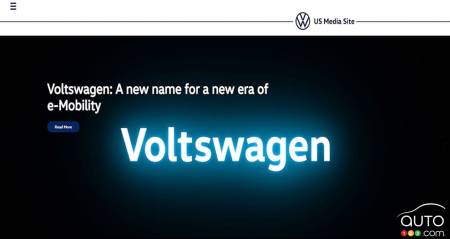 Why? Because the “news” filtered out too early. The idea was for VW to send it out into the world actually on the first of April. The result of the “leak” was confusion across the internet.

Looked at from one angle, maybe it was just VW being VW. The automaker is actually kind of familiar with ad campaigns that go south, it having happened a few times at Volkswagen over the past few years.

But not, we’ll clear up once more, at Voltswagen.

The company must be hoping that by this time next year most folks will have forgotten that as April 1 approaches, nothing out of Volkwagen’s official mouth should be taken at face value.

When you cry wolf too often...

The 2022 Volkswagen Golf R, an utterly mature and enjoyable small hatchback with an increasingly uncertain future (as an ICE vehicle, in any case). We don’t ...