Auto 123 gets the chance to drive an extraordinarily rare vehicle, the 1965 Datsun L320

In the world of classic cars, there are some vehicles that are much more common than others. Introducing them to you will never be a difficult endeavour. Where the challenge lies for us is in the search for more unique, exclusive and rare products.

And I'm not just talking about limited edition Ferraris or special editions of well-known models. Rather, I'm referring to vehicles that had solid careers, but were either only meekly marketed or downright left to fend for themselves once their useful life was over due to their relatively low value.

As for the munchkin that we’re presenting to you here, it suffered from both phenomena. 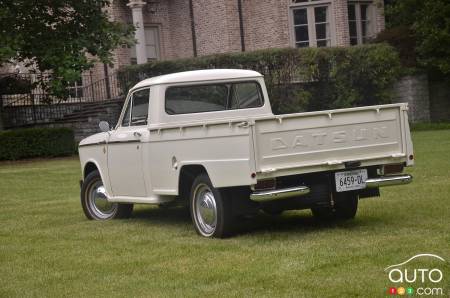 In 1965, Datsun was still in its infancy in North America. Its products, although interesting and different, did not draw the kind of attention the company’s products do today (Datsun having become Nissan).

As a result, the discovery of this pint-sized pickup is a true miracle.

First steps in America
Datsun entered the North American market in the late 1950s. At the time, the success of an individual was often measured by the size of his car, or at least its wings. Datsun didn’t have the products to compete with those of American manufacturers. Moreover, its ambition was not to revolutionize the market here. 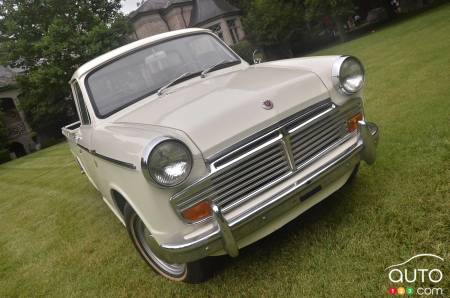 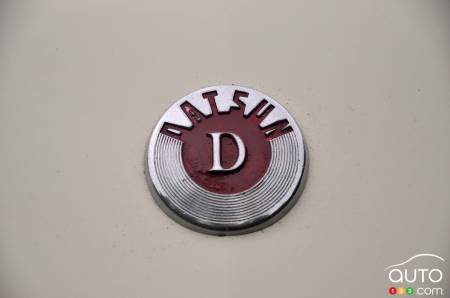 First pickup trucks
The first truck bearing the name Datsun appeared in 1934 with the Model 13. The company sold that model until December 1943, when production ceased in Japan due to the war. Production resumed in July 1946, 11 months after the Hiroshima and Nagasaki disasters, and continued until 1954. During those years, a host of variants (six, in fact) followed one another until Datsun introduced the truck that was to replace it, the 120.

First pickup trucks... in the United States
The Datsun 120 was intended as a significant evolution, but compared to what was being sold in America it din’t really have the hood: it’s impossible not to smile when you look at its technical specifications. It was equipped with an 860-cc, 4-cylinder engine that offered the incredible output of... 25 hp! 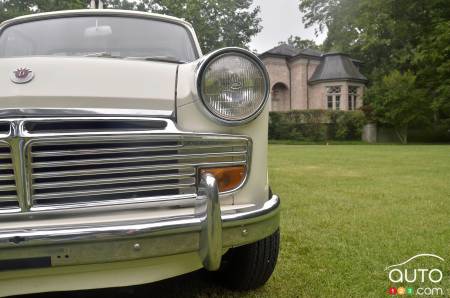 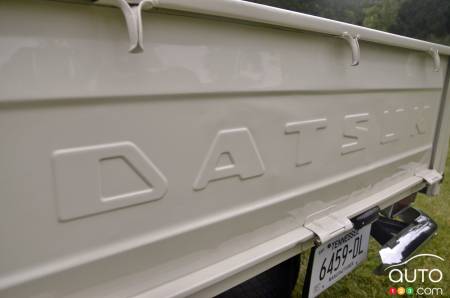 Its capacity: a quarter-ton!
It wasn't until 1959 that it arrived on American soil. By then it was equipped with a more powerful engine. In 1957 Datsun had introduced the 220 model, which could be powered by two engines. One was 880cc, the other 1,198cc. The former generated 37 hp, the latter 48.

American consumers were offered versions equipped with the smaller block, but before long Datsun introduced to them the stronger engine.

While any comparison with the full-size offerings then put forward by American manufacturers was a one-sided affair, Datsun's product still drew a lot of attention, for a couple reasons.

First, the company was introducing a type of vehicle new to the American public: the more-compact pickup truck. The latter is now part of the automotive landscape, although in reality it’s no longer all that compact. Second, for those open to something different, it offered something new, something completely kitsch. Ironically, if you look at Nissan's success with its Juke, you can see some sort of filial link, a readiness to take chances common to the two models separated by several decades. 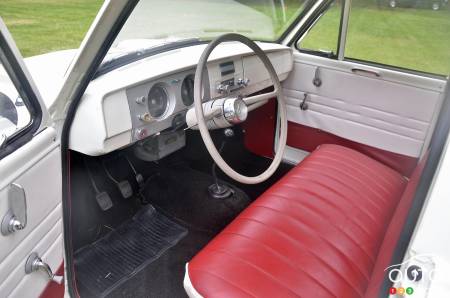 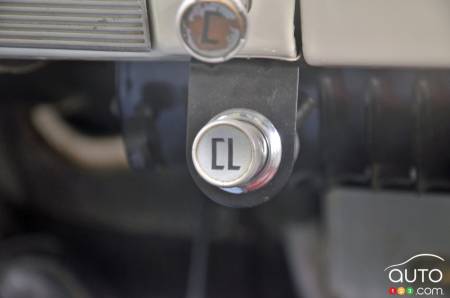 The 220 proved very popular with landscapers and farmers, but also with surfers. These folks liked its compact size, the ease with which it could be parked anywhere and the fact that it consumed very little fuel.

Unsurprisingly, the model was most warmly received in California. The first model was sold in San Diego, in fact, by one Ray Lemke, owner of the first official Datsun dealership in the United States. The buyer had insisted on getting his hands on the first edition the same day he saw it arrive at the dealership.
Lemke regretted parting with it when he learned that he had to wait three months before getting a second one in stock.

The 320 Series
Very quickly, in 1961 in fact, the next generation of the model was introduced in America, and it was improved in many ways. Notably, an independent torsion beam front suspension replaced the rigid axle of the earlier models. 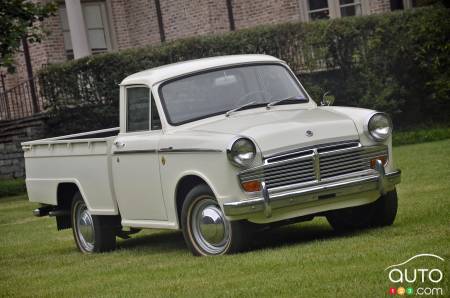 A host of 320 variants were available. Datsun already understood that buyers wanted choice in terms of cab and gearbox configurations. The capacity was half a ton and an upgraded engine delivered 1189cc and 60 hp. You can actually see that last figure displayed proudly on the flanks of the vehicle in the images here. 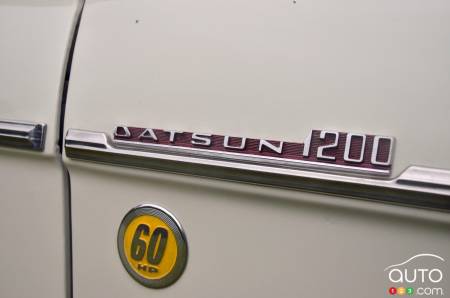 To work with this engine, a non-synchronized 4-speed manual transmission was standard equipment. The rear axle gear ratio made takeoff easier, but on the highway, it became a dangerous ride above 100 km/h.

By 1965, the model was in its final stages of life. Production ceased in April, when its successor, the 520 series model, was introduced. It was this model that allowed Datsun to establish itself more solidly in the compact pickup truck segment in the United States.

Nevertheless, the 320 series model had paved the way for Datsun. 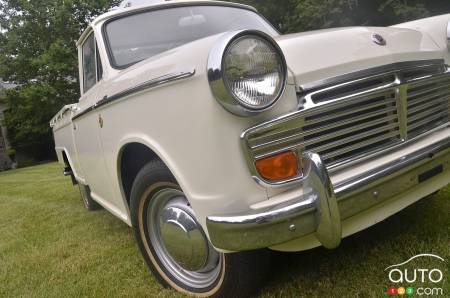 Our 1965 Datsun L320
I had the opportunity to discover this little gem at an event held by Nissan in the Nashville, Tennessee area. The vehicle is part of the collection of the Lane Motor Museum and had been taken out of the museum for the event. And, like all the vehicles in this museum, it is in roadworthy condition.

It didn’t take much arm-twisting for us to agree to take it for a drive.

As we climbed aboard, the first thing that struck us was the 50 years that separate this old Datsun from contemporary vehicles. This was a very rudimentary machine. A steering wheel, pedals, a shift lever and some gauges and that’s pretty much it.

That was enough, apparently. 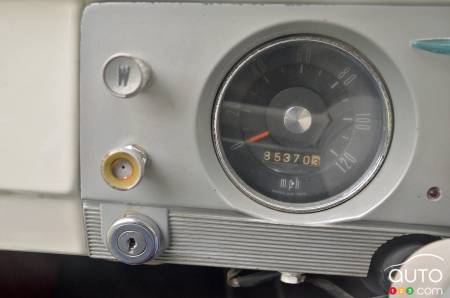 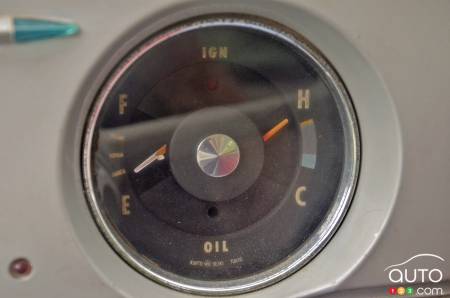 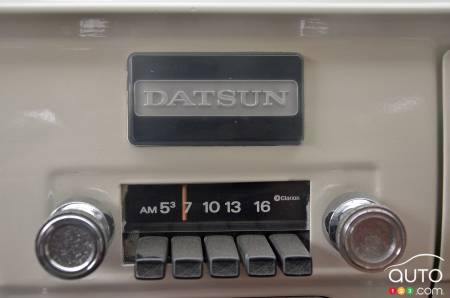 On the road, the driving experience was as unique as it was memorable. Pleasant, too. Of course, the 4-speed manual transmission requires careful handling, especially when shifting into first gear; you have to be completely stopped. Shifting into second gear is easy, but for third, you have to move the lever up, to the right, to the other side of the world. 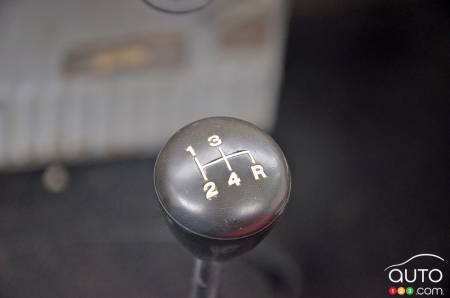 It’s all done with a big smile on your face.

When it's time to brake, you literally have to jump on the brake pedal and apply very strong pressure to get a result. And be careful not to press two pedals at the same time (see photo). 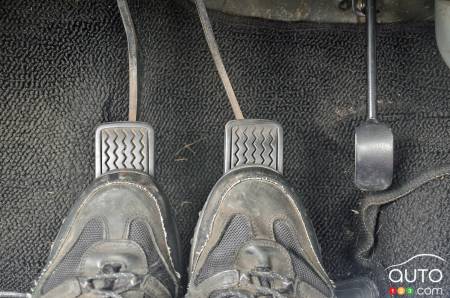 Yes, from our modern perspective, it all seems archaic. But boy is it fun.

When they tell you that today's cars are missing something...

Our test drive was short, but long enough for us to understand how much this vehicle managed to seduce so many surfers, farmers and others when it arrived in America.

As for the modern Nissan, we can confirm the automaker has come a long way. A very long way. 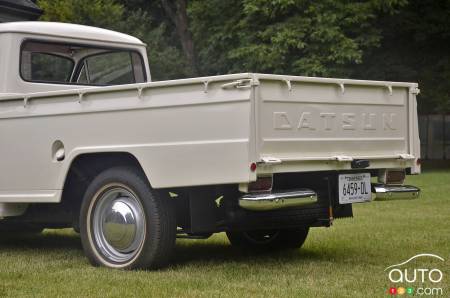 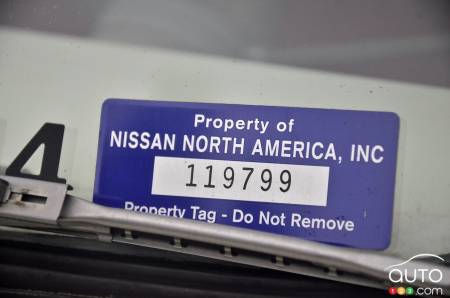 Conclusion
It’s always a fascinating experience to discover close up very rare vehicles. The Lane Motor Museum in Nashville specializes in collecting these collection pieces, and if you’re in the neighborhood, a visit is a highly recommended.

As for our L320, it was all the more special an encounter because it is such a rarity. As mentioned, the production was more limited for this model in 1965, so there aren’t many around today. 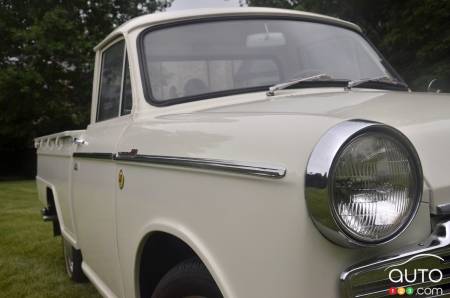 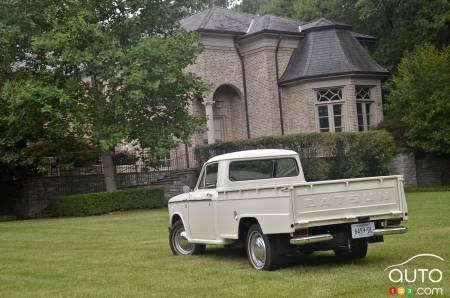 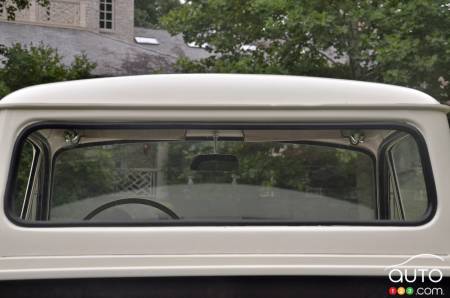 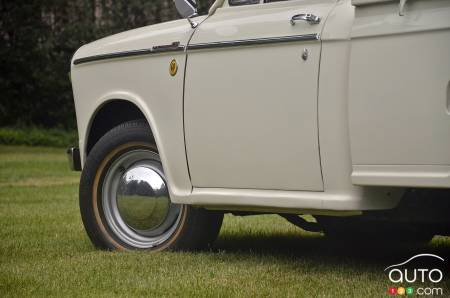 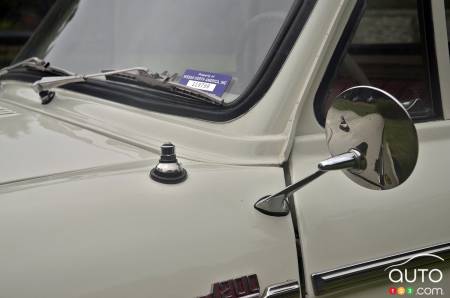 A video revealing the roar of the 2021 Ram TRX at startup is currently making a lot of noise online. More proof if any was needed that this is one highly ant...