As the competition becomes increasingly intense in the compact crossover market, automakers are whipping out the big guns and driving more value for shoppers in ever more powerful and innovative ways. The new 2017 Hyundai Tucson exemplifies the trend as the Korean company has deployed considerable styling and engineering expertise.

Upscale look
From a glance, this one’s a serious looker―maybe the first Tucson anyone has bought because of its design. There’s a blend of sculpting and accenting dispatched across the body; the front fascia wouldn’t look out of place capping the nose of a luxury crossover. Overall, it’s modern, upscale, and distinctive.

Styling is one of several attributes used by the new Hyundai Tucson to stand apart in the crowd. After all, every advantage matters when you’re but a drop in a sea of new-to-market compact utility vehicles.

And those vehicles are, largely and on numerous levels, pretty much exactly the same. They all offer 4-cylinder power, folding seats, a decent cargo hold, upscale options, and available all-wheel drive. So, for the balance of this review, I will focus on what helps Hyundai’s latest Tucson stand out and be a little different.

Impressive content and ride
My tester: A $28,899 unit in 2.0L Premium AWD guise, flaunting Bluetooth, USB inputs, heated cloth seats in front and rear, and advanced safety gizmos like Blind Spot Monitoring and Rear Cross Traffic Alert. There’s a backup camera, a drive mode selector, and even a LOCK switch for the AWD system, pre-engaging full traction ahead of extra-slippery conditions. Here’s a feature set that’s big on imparting confidence through the latest in innovative tech.

Ride quality is one of the 2017 Hyundai Tucson’s most valuable assets. With Sachs premium dampers, lightweight stabilizer bars, and a highly evolved, ultra-rigid new body structure, you can feel the benefits of one of the segment’s most advanced platforms on every drive.

The structure is forged largely from an in-house blend of Advanced High Strength Steel (AHSS), which adds strength, reduces weight, and forms a more ideal base upon which the rubber isolators and bushings in the suspension can be fine-tuned. This, in turn, gives engineers greater control over ride quality and handling balance, and results in a quieter drive.

Forget heading down a rough road and hearing the suspension getting kicked around beneath you, or feeling a sense of delicate flimsiness, or hearing the dull roar inside as the body shell flexes over bumps and pumps air through the cabin. With the new Tucson’s fine-tuned suspension, rigid body, and premium dampers, the ride feels dense and durable, and remains relatively quiet over almost anything.

Great steering and braking performance
Steering is another asset, and feels as dialed-in as the suspension. The electric motor-driven system eliminates much of the feeling of the road through the wheel, but the steering action itself is liquid-smooth, and the ratio feels expertly balanced against the tuning of the suspension. Furthermore, the electric assist adjusts to vehicle speed, resulting in a steering system that feels bang-on in virtually every situation.

From the driver’s seat, the 2017 Hyundai Tucson feels lively in city traffic, locked on to its lane on the highway, and effortless to maneuver (using just one finger) during low-speed parking exercises. And it’s all beautifully isolated—even the roughest roads fail to transmit any tugging, pulling or harshness back to the driver’s fingertips through the wheel.

The brakes fall into favourable fine-tuning territory, too: They bite hard from a slight press, feel nearly sports-car precise and easy to modulate when required, and get the Tucson stationary in quick order when called upon.

The gist? Whether stopping, cornering, or cruising down a rough road, the Hyundai Tucson operates with a sense that some people spent some time dialing it in. It checks all of the right boxes for styling and dynamics that stand at or near the top of its segment.

Somewhat disappointing interior
The cabin is a real mixed bag, though. On one hand, modern interfaces, good build quality, and a few leather accents dial up the sophistication. On the other hand, my mid-grade tester was almost entirely trimmed in the same texture and colour of crispy black plastic, and lacked the styling passion demonstrated by the exterior.

For sure, the cabin is comfortable, features plenty of accessible storage implements, and puts numerous charging ports within easy reach, but the use of styling cues and materials is average at best in the segment.

Responsive and refined engine
Under the hood, a 2.0L 4-cylinder engine comes standard, and a 1.6L turbo 4-cylinder is available. The former targets a balance between fuel economy and output, with 164 horsepower. On the plus side, the engine is responsive; driven gently, it’s mostly quiet and always refined. Pushed hard, performance is adequate, unless you’re in ECO mode, where the Tucson is sluggish and feels like it’s suffering from a hangover. Sport mode helps with responsiveness, though numerous competitors operate more quietly at full throttle.

Other notes? Headlight performance is slightly above average for the price point, and mileage on my watch landed at 10.2L/100km, measured by hand. The computer readout pegged mileage around 9.4L/100km, if you trust that more. Your results will vary.

Finally, the Tucson’s AWD system operates smoothly and seamlessly when pushed in greasy snow and slush, with sensations of excessive slippage or squirming from the driveline kept to a minimum.

Is the Tucson right for you?
Ultimately, if stand-out exterior styling, good ride quality, and a nicely dialed-in all-around driving feel are higher on your crossover wish-list than interior styling and material selection, the new Tucson deserves your attention. Other comparison test-drives should include the Jeep Cherokee and Toyota RAV4. 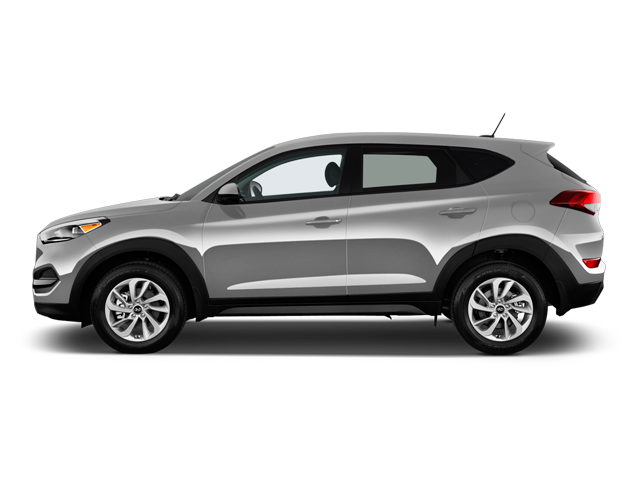 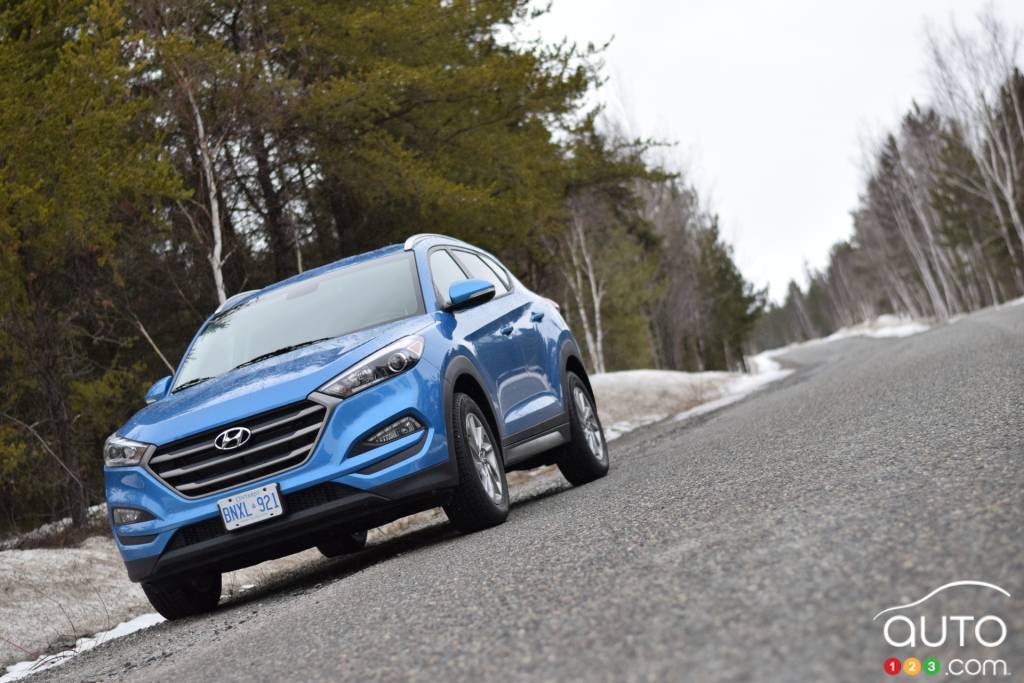 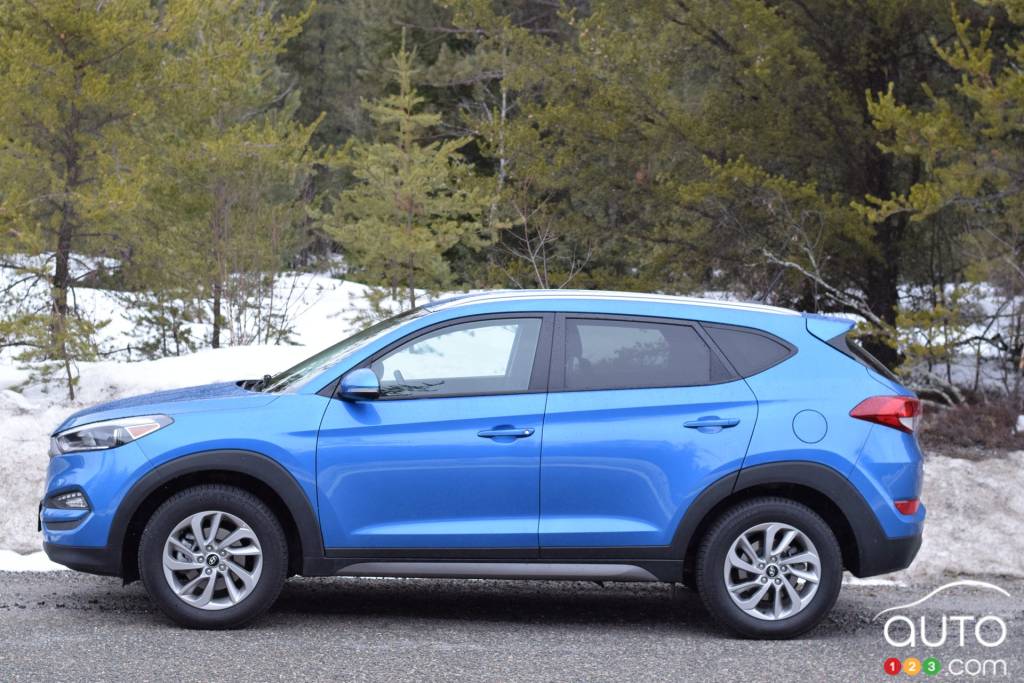 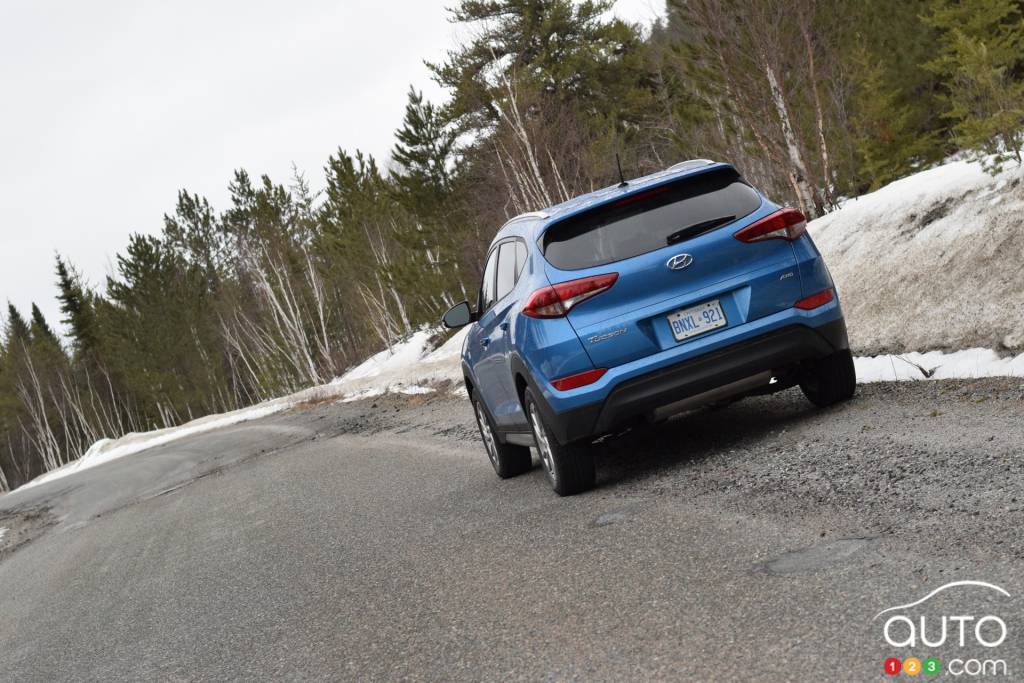 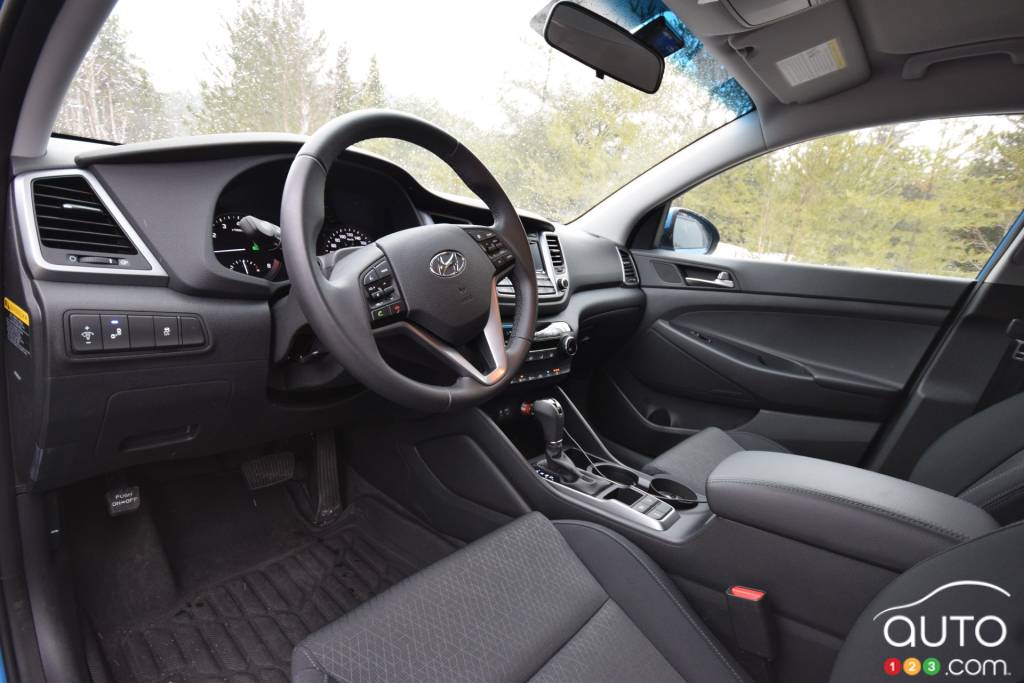 The Hyundai Tucson has won the 2017 Auto123.com Compact SUV of the Year award. Here’s your chance to rediscover this model. Don’t miss our full review!

Hyundai has teased the N Line appearance package for its Tucson SUV with two images released ahead of the official presentation at the Geneva Motor Show.