Maybe we should stop being surprised by this, but once again, summer has been pushed out by fall, with winter looming on the horizon, and all are in a tither. As I write this, it’s raining buckets outside, fall is well-entrenched, and my early-autumn road test of the 2018 Audi S5 Cabriolet is already starting to recede from my memory.

Well, not really. The sensation of driving a soft-top Audi equipped with a 354-hp turbocharged V6 is lingering pleasantly in my bones, but it is fighting to keep its place there with the incoming cold weather. This ride officially marked the last open-air, hair-to-the-wind drive I was able to enjoy… until spring 2019.

Of course, one of the great things about a car like the Audi S5 is that it’s perfectly possible to drive around in it 12 months out of the year. It does after all have Audi’s Quattro all-wheel-drive system, included in all of the A5, S5 and RS5 variants. Luckily for me, though, it was mostly still t-shirt weather during my week with the S5 cabriolet. Here’s the debriefing of my glorious week at the wheel of this German 2+2!

The discreet charms of an S5 Cabriolet
In keeping with the strict traditions imposed at Audi, the brand’s engineers did not expend much energy trying to outdo the A5 Cabriolet’s head-turning visuals. The S5 respects the four-ring manufacturer’s styling etiquette, starting with a chromed front grille, sporting the S5 badge prominently on its right side. The lower part of the front end features bigger vents under the light clusters, thus allowing for more fresh air to reach the engine and the braking system.

On the flanks are more S5 badges, placed beneath chrome accents. The side-view mirrors get a satin silver finish, while the 19-inch alloy wheels do a good job of not hiding the red brake calipers lurking behind them. In the back, the only elements hinting at the sportier character of the convertible are the number of exhaust tips coming out from underneath it, and of course another S5 badge.

The powertrain you would hope for
In case you didn’t already know, Audi has almost completely eliminated manual gearboxes from its product offer, in a gradual process going back a few years. The S and RS versions come exclusively with automatic transmissions. The S5 Cabriolet gets an 8-speed variety, with of course a manual mode if you want to get jiggy with it.

Tied to this transmission is a 3.0L turbocharged V6 generating up to a very pleasant 354 hp, and maximum torque of 369 lb-ft. These numbers make it the equal of other big players in the segment, most relevantly the BMW M440i xDrive and Mercedes-Benz AMG C 43 4MATIC.

As for that Quattro all-wheel-drive system, need we say any more about this technology that long ago proved itself? The manufacturer nonetheless continues to tweak and tinker with this system, which is found in the majority of its models and is, as mentioned, present and on duty in the S5 Cabriolet. While the summery conditions of my test drive didn’t necessitate much contribution from the rear axle, it’s still reassuring to know the system’s there for when the bad times hit.

A refined interior
Inside the soft-top coupe you see evidence of the same attention to detail that marks other Audi models, but with a soupcon of performance spread throughout. There’s the flat-bottomed steering wheel, for example, and the wrap-around seats and the S inscriptions here, there and almost everywhere, just to remind you that you’re sitting in a more-intense car than the entry-level model.

The Ingolstadt-based automaker has long been known for the quality of execution inside its vehicles, and the S5 Cabriolet is no exception on that front. This very Germanic car interior features rubber, plastic, carbon-fibre and leather elements living Brady Bunch-style in perfect harmony. One caveat I would insert here is the colour of the seats, a very pale grey that to my mind makes of the interior environment a colder space – although it’ still better than all-black!
I should also mention the soft top, which manages to insulate the cabin marvellously well when it’s put back in place, even when driving at highway speeds. 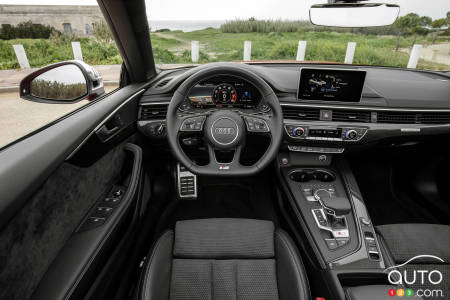 At the wheel
As I noted one week earlier when I drove the 2018 RS5 coupe – here’s our review of that model - the ease with which it’s possible to interact with sports cars these days is almost disconcerting. The older RS5 was pretty brutal with its V8 and dual-clutch transmission, but with the new twin-turbo V6 and automatic transmission, any novice driver with a permit can drive away at the wheel of a coupe with the most powerful V6 in the Audi lineup.

Sitting one rung lower on the Audi product ladder, The S5 Cabriolet is in fact an even gentler version of the family hot rod. Still, thanks to the magic of electronics, it’s possible to transform the character of the car; Dynamic mode firms up the suspension and steering and tightens up the responsiveness of the transmission. At the other end of the spectrum Comfort mode is well-suited to making life more pleasant on our pockmarked roads.

At the same time, whichever mode you pick, the S5 Cabriolet remains a very comfortable highway cruiser. The V6 turbo engine delivers energetic accelerations, and you won’t suffer any hiccups from the transmission, although it does get nervier when you’re in Dynamic mode. And of course, the trusty Quattro AWD makes you feel like you’re driving with big velcro strips on each wheel. I imagine that for this car to lose its grip at all would require a perfect storm of heavy snow, ice and slush!

The last word
For sure, the Audi S5 Cabriolet is a car more appropriate in general for a place like California or other warmer environment than ours, which obliges us to put the top up from November to March, if not longer. But I repeat: the beauty of this exquisitely designed and built, Quattro-equipped German car is that it can be driven in all conditions.

Space in the back row of seats is limited, as is the cargo space in the trunk, but no matter. The buyer of this kind of car won’t be deterred by those shortcomings. The Audi S5 Cabriolet excels on long highway rides, even allowing the driver to indulge in some sportier activity behind the wheel, whether they’ve got the top up or down! 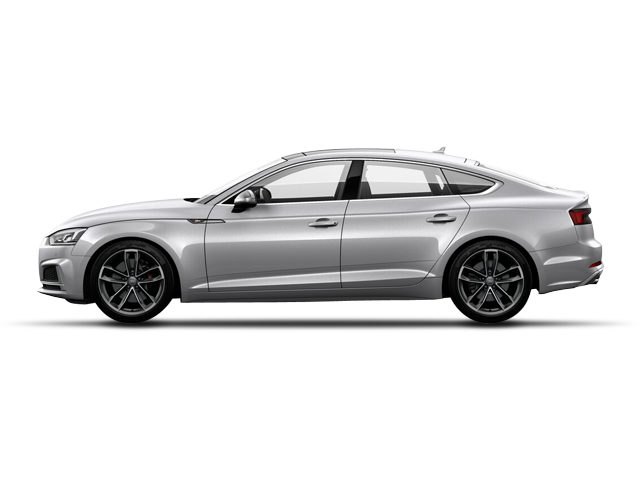 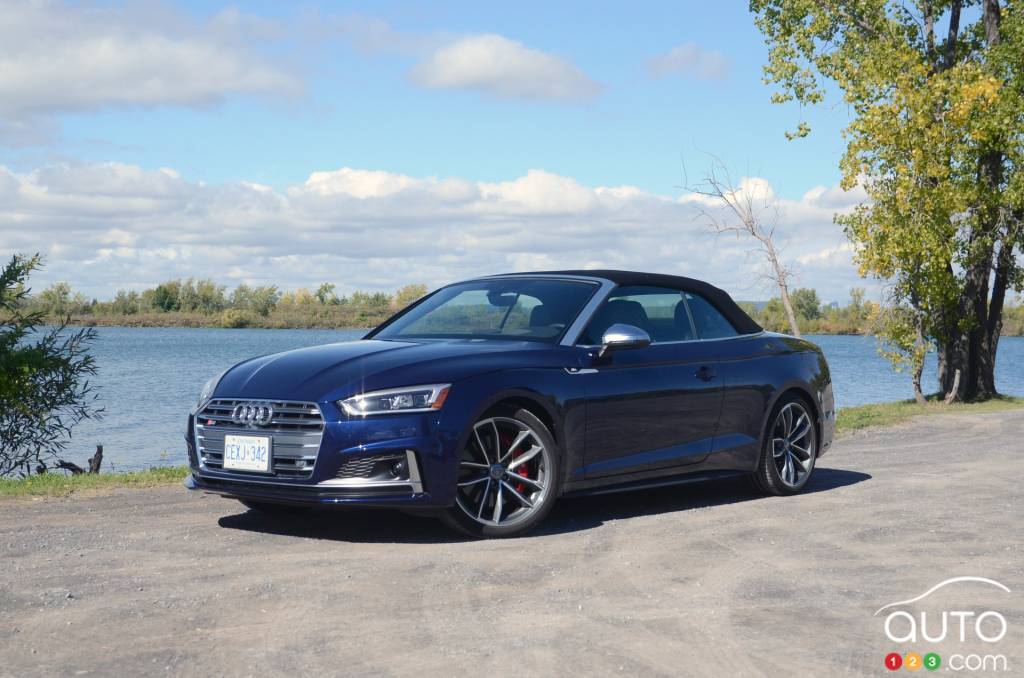 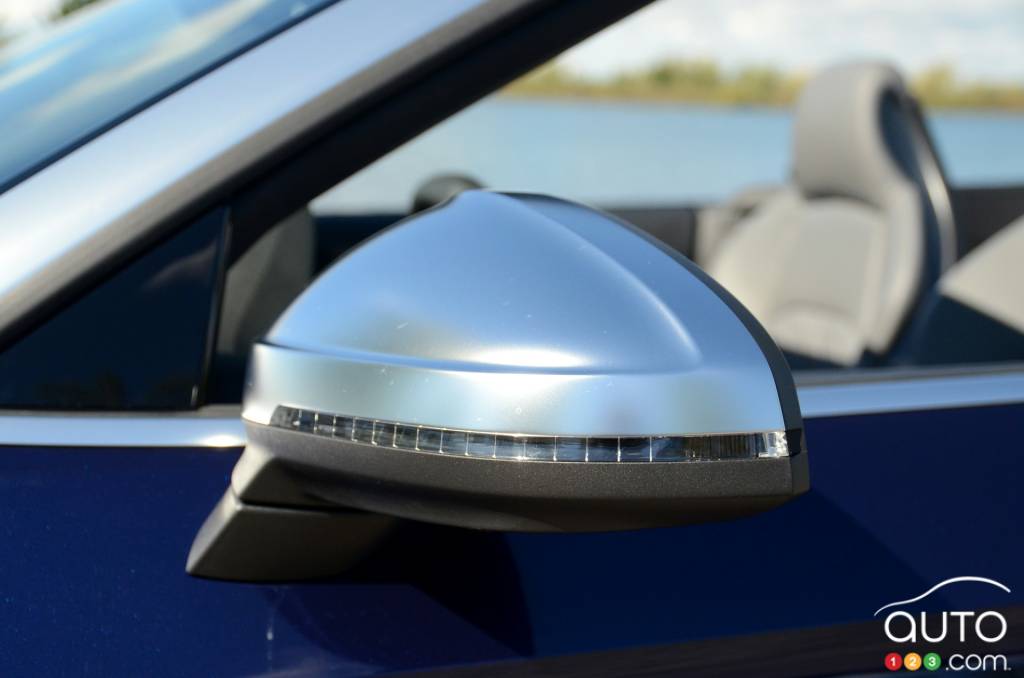 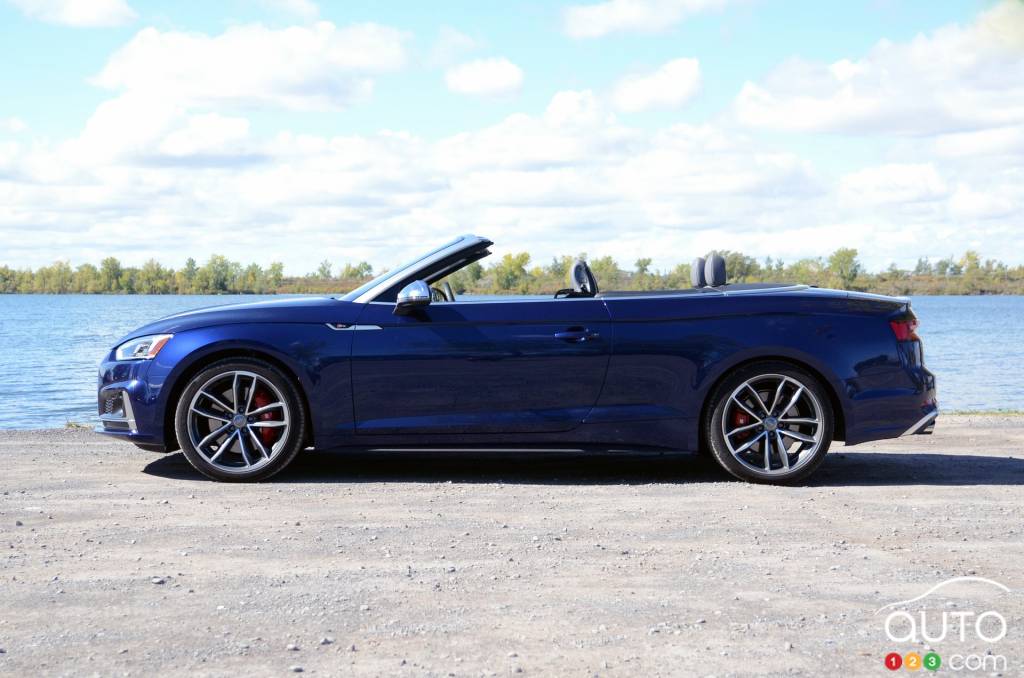 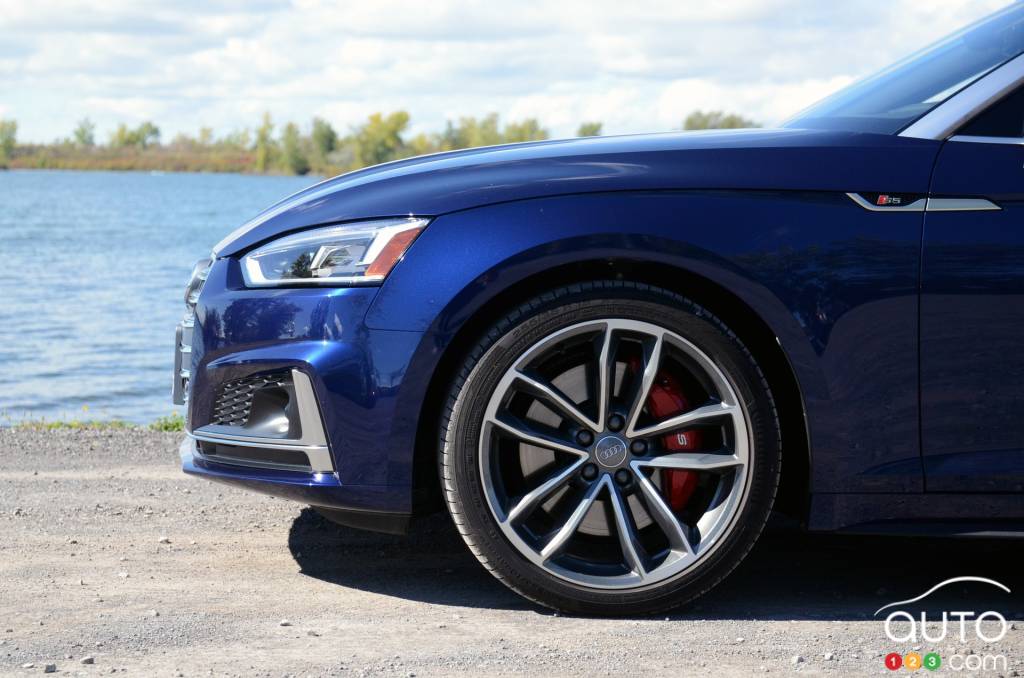 Reimagined design details and two powerful new engines define the second generation of the A5 family of vehicles.

The premiere of the fully redesigned Audi A5 Cabriolet completes the new generation of the A5 family, which debuted in coupe form earlier this year. Check ou...