It’s as if Kia had designed its new 2018 Rio 5-Door with the Quebec market specifically in mind. In fact, the North American launch of the new edition was held at Montreal’s auto show in January of this year, while the press presentation took place in Quebec City a few months later. This is not all that surprising given the strong popularity of subcompact cars in the province. The reputation of Quebec, and Canada for that matter, as a small-car lovers’ market is well-known throughout North America. We just love practical and economical cars, it seems…

The good news is that the 2018 Rio 5-Door comes complete with a rich roster of equipment, especially given its pricing and the category it competes in. For example, the heated steering wheel, optional in the previous incarnation, is now standard in all versions of the Rio. It’s also wrapped in leather, as is the gear knob. These little touches of luxury are highly appreciated in such a frugally priced model. It’s a bold move away from the attitude that governed manufacturers in prior days, which involved taking what almost seemed like wicked pleasure from making budget-conscious buyers suffer by offering them bare-bones trims stripped of practically all comfort elements.

Kia today, on the contrary, makes generosity a point of honour, it seems!

More space in the new Rio
Both the sedan and the hatchback model, which was the version we road tested, have similar wheelbases, some 10 mm more than the previous Rio, and total length is 15 mm greater. These changes have translated into more legroom both in front and in back. What’s more, the new Rio 5-Door has 325 litres of rear cargo space with the back seats up, and 1,054 with them folded down. On the other hand, these seats don’t actually fold down completely to create a flat surface.

Overall the design of the hatchback version has been rendered more stylish, elegant and dynamic. This further helps the car’s cause when you consider how relatively anonymous and unstimulating the looks of most models in this segment tend to be.

Inside, while the cabin does suffer from its share of hard plastic elements, the quality level overall is quite good and the finishing has been looked after with care. The dashboard, meanwhile, has been entirely revised. For one thing the display screen is now presented in relief. Depending on the version that screen is either 5 or 7 inches. Connectivity fans, that is to say just about everyone nowadays, will be glad to know that Apple CarPlay and Android Auto compatibility is now included standard. Even better, the runt of the Kia litter is also now linked to the automaker’s telematics system that can detect certain mechanical issues remotely, and allows users to start the engine or lock and unlock the doors remotely via their smartphone. Amazingly, there’s still more: a back-up camera and heated seats are also now included as standard equipment.

The same engine… almost
The platform of the 2018 Kia Rio 5-Door is all-new and firmed up by the use of lighter, more rigid steel. Kia, like Hyundai, is proud to point out whenever it can that it has its own steel mills and so can supply steel that corresponds precisely to its engineers’ requirements. That said, the new Rio has actually taken on a few pounds, due mainly to the presence of new systems.

It seems that the 1.6L 4-cylinder engine of the old Rio has been passed on to the new without any major changes. What is different is its programming. Output now tops out at 130 hp (7 less than before) and torque at 119 lb-ft (4 less than previously).  Performance, however, is definitely more responsive, and fuel-efficiency has taken more steps forward – and that’s really what counts with potential buyers of the Rio anyways. The standard 6-speed manual transmission can be switched out for a 6-speed automatic.

Nothing out of the ordinary to report in regards to the suspension with struts in the front and a semi-independent rear axle. On the other hand, it is worth noting the presence of disc brakes in front and in back – no more drums!

A pleasant all-purpose car
When one buys an economical subcompact, one still wants to benefit from as much comfort and standard equipment as possible for the price paid. A responsive engine is also welcome (even one that is fairly noisy during accelerations, a forgivable offence). One also hopes for a driving experience that inspires even if it isn’t exactly sporty. And of course, one would expect practicality and versatility, otherwise what’s the point?

Selling starting at $14,995, the 2018 Kia Rio 5-Door actually meets all those requirements at a great price, Only trouble is, consumers need to turn to the highest-end EX Tech version (priced around $24,000) to benefit from such features as automatic emergency braking. The fact remains, though, that the interior of the new edition is sufficiently roomy and comes with its share and then some of luxury-tinged features.  While it won’t ever be confused with a track star, the engine is nervy enough to make the driving experience agreeable; its road handling allows drivers to have their share of fun on their favourite winding roads. While we wouldn’t go so far as to call it a poor man’s BMW, this is one honest car.

Meanwhile, the 5-door configuration ensures its versatility, and, like all the other models in the Kia lineup, this one comes with a hefty warranty (5 years/100,000 km on the vehicle and powertrain). This constitutes yet another reason the 2018 Rio 5-Door should make it on the shortlist of any budget-conscious buyer this season.

Take a moment to check out the detailed specifications of Kia’s new 2018 Rio 5-Door. 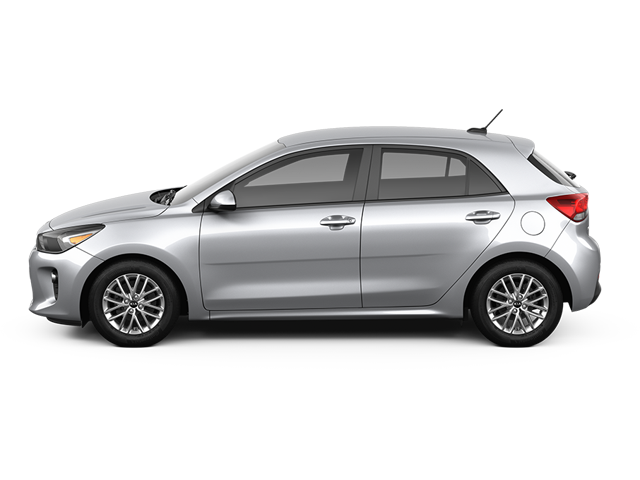 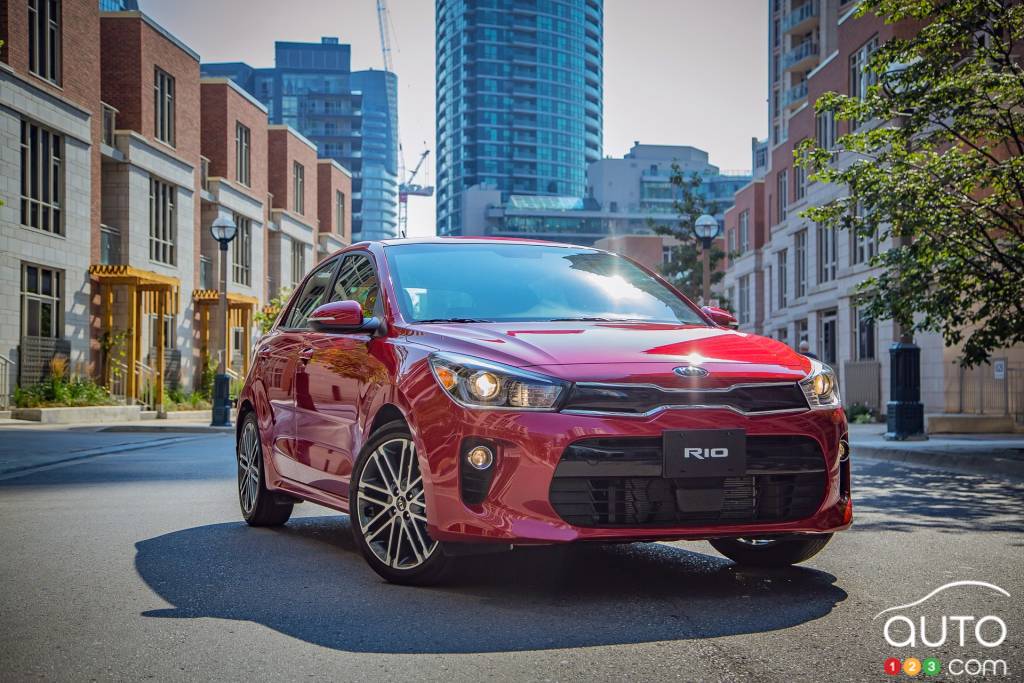 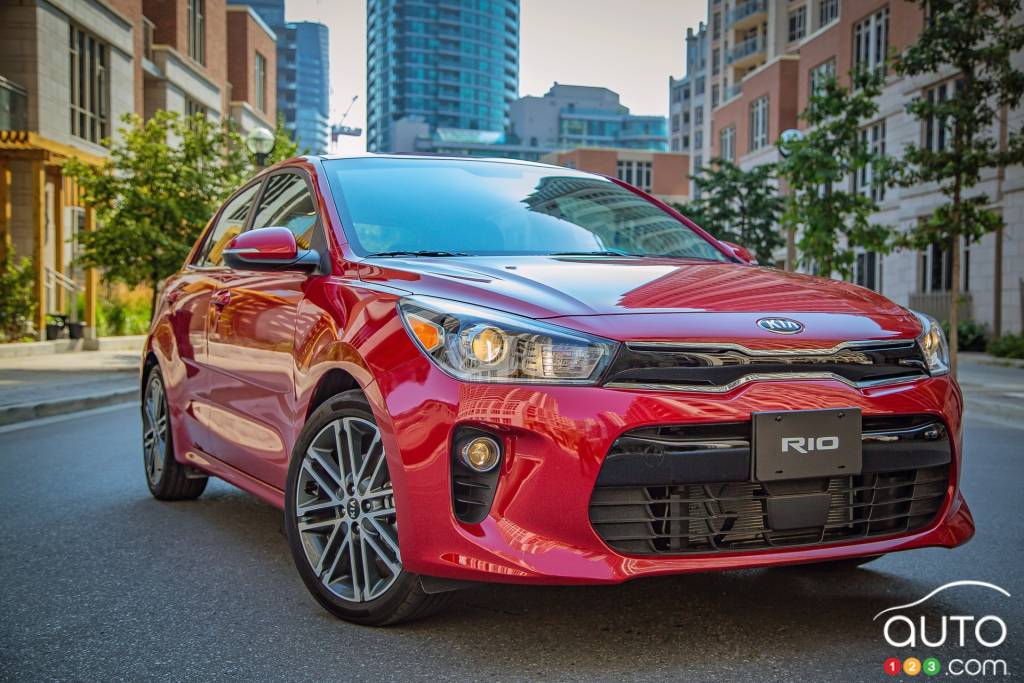 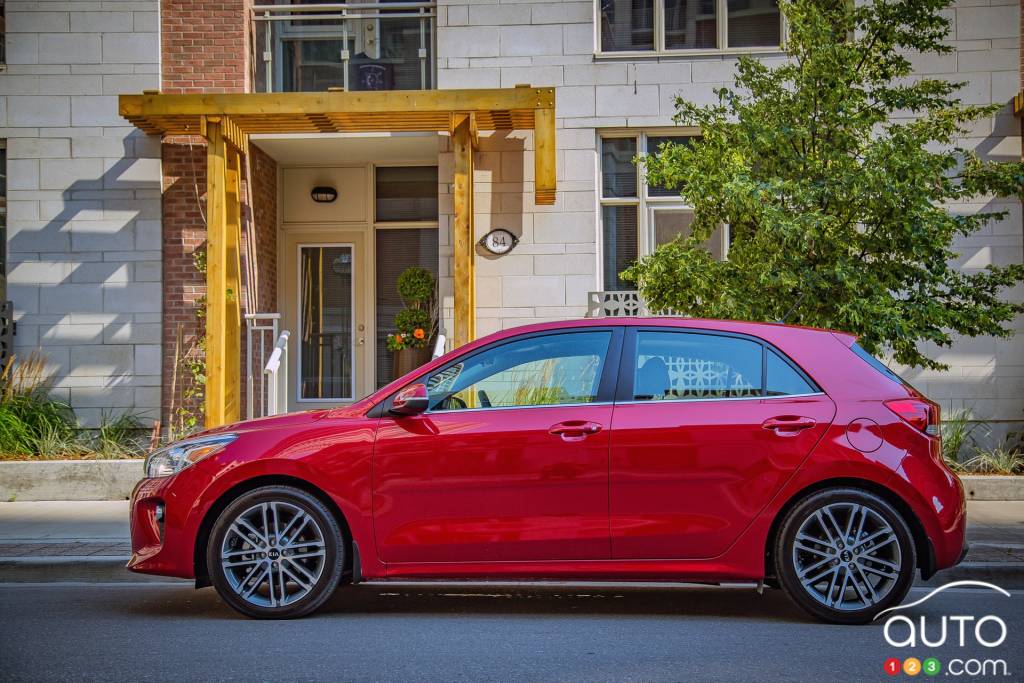 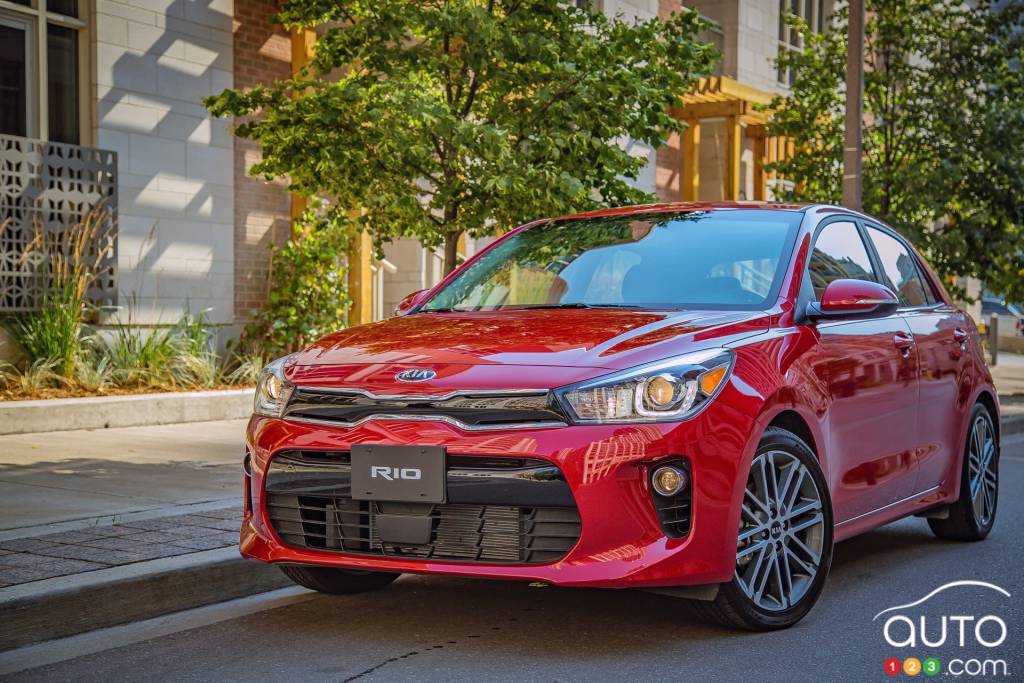 Your shortlist if you’re shopping for a new subcompact car should definitely include the Honda Fit, Kia Rio and Hyundai Accent and it's worth test driving th...

Learn more about the new Kia Stinger and discover why it was chosen best in its category during our 2018 Auto123.com Awards.