Small utility vehicles are, these days, virtually a dime a dozen. There are now so many of them that they’ve been divvied up into two categories: compacts and subcompacts. In the latter group there’s one in particular that isn’t normally associated with the SUV concept, no doubt because, like the little-known and little-popular Fiat 500L, it is not available with all-wheel drive. And yet this hasn’t prevented it from currently occupying the second spot on the sales chart in its class in the country. Meet the Kia Soul.

Small its dimensions may be, but this vehicle benefits from a transformable trunk that can accommodate a bicycle, 60-inch flat-screen TV, small ladder or even that pile of boxes your overgrown teen wants to lug with him to his student apartment. And that functionality is offset quite interestingly by the car’s funky and fly appearance.

In any case, in Kia’s view, this is no mere… SUV. That designation won’t do for this vehicle for which the Korean automaker has invented a new label. The Soul is an urban hatchback vehicle, or UHV, thank you very much. What car manufacturers won’t do to keep their creations from melting in with the masses with generic, overused designations…

To be fair, this strategy is an apt one in the case of the Kia Soul, since its target consumer has as a defining characteristic a visceral need to stand apart from the crowd. It is with this in mind that Kia ventured to give the Soul such an unconventional shape – a bit like Toyota and Nissan had done previously with the xB and the Cube, respectively. The biggest difference between these two models and the Soul is that while both the older models bit the dust, Kia’s version has sold some 90,000 units in Canada since its debut in February 2009. Toyota and Nissan were unable to attain even one-tenth of that total with their “boxes on wheels”.

Logically, the Soul should sport an easier-to-digest design to go with its quite practical interior (the rear lifting hatch shines all the brighter when recalling the cumbersome large door of the Cube, for example). But it’s clear that the original marketing plan adopted for the Soul, starring those adorable, anthropomorphic sharp-dressed hamsters tripping the light fantastic, played some part in making a success of the model, as did the improvements Kia has assiduously made on the product in recent years.

Boosted engines
At the outset, the Kia Soul offered 1.6L and 2.0L naturally aspirated engines whose performance ambitions were, let’s say, pretty tame. The refont of the Soul in 2014 introduced upgraded versions of these engines. The two engines that now power the model are more muscular and team with modern 6-speed automatic transmissions, which have taken the place of the old 5-speed manual and 4-speed automatic gearboxes that were available before. This substantial improvement has assuredly contributed to keeping the popularity level of the Soul buoyant. Although, it should be said that there is, still, no all-wheel drive available.

During the 2014 revamp, the manufacturer hardly touched the styling of the Soul. It did, however, make its UHV greener by adding an electric version. Sales of this version have barely registered on the radar, mind you, with Kia selling just a touch more than 1,530 units in Canada in three years.

In any event, the company did not leave it at that. It has persisted in its quest to renew the Soul and help maintain its popularity in the face of increasingly numerous - and increasingly attractive - models in the category, the Honda HR-V and Mazda CX-3 chief among them. What better kickstart, the engineers decided, than a supercharged engine to reintroduce the Soul to the rebel image promulgated by those furry rodents that have been the model’s spokes-creatures since 2010?

A turbo, for hamsters on steroids
The new 1.6L supercharged engine is derived from a posh version, called the SX Turbo, which is found in the Forte5 SX compact hatchback and earlier on powered the fun, and just discontinued, Forte Koup coupe.

In comparison with the 161-hp 2.0L naturally aspirated engine, the 4-cylinder turbo delivers 40 horses more. Torque is also better, across a wide RPM range:  195 lb-ft between 1,500 and 4,500 RPM (vastly better than the 2.0L’s 149 lb-ft starting at 4,700 RPM). A dual-clutch 7-speed automatic transmission delivers power to the front wheels. Purists will, of course, lament the absence of a manual gearbox to go with this sporty-looking vehicle.

The turbo engine gives the Kia Soul enough pep to accelerate from 0-100 km/h in a hair over seven seconds – 1.5 seconds less than the 2.0L and two seconds less than the base 1.6L engine. This energy makes itself most felt, however, during passing manoeuvres, which are noticeably livelier.

Surprisingly, this engine is also, at least marginally, the most fuel-economical among the three available motors; its fuel consumption is 8.5L/100 km combined (9.1 city, 7.7 highway). Another plus is that this turbo runs on regular fuel, which is not the case with all of the supercharged equivalents among its competitors.

It’s true though that within its segment, you can find more fuel-stingy models. The HR-V and the CX-3 outperform it in this regard, with all-wheel drive to boot; each comes in at 8.2L/100 km. The two-wheel drives versions of these models do even better, using only 7.7L and 7.6L/00 km, respectively. All of which means that the consumer who prioritizes fuel economy, and the one who wants that sporty driving experience, each knows which model to turn to.

For the rest, the specs file of the 2018 Kia Soul SX Turbo looks much like those of the other trims in the lineup, the only major differences being its bigger front brakes (305 mm instead of 280 mm) and exclusive 18-inch aluminum alloy wheels (which by the way are more expensive to get winter tires for than the 16-inch and 17-inch wheels of the Soul LX and EX). And given that the Soul base models already have precise (if a little light) steering and a suspension that delivers a quiet ride without excessive roll, that is just fine.

Practical and spacious
The versatile interior of the Kia Soul, a key contributor to its popularity, can very comfortably accommodate four adults thanks to generous head  and leg room, in front but importantly also in back. This is one quality lacking in the CX-3.

Leather seating is offered with the Soul, but only with the EX version with Premium package. That said, the sport seats (cloth, with orange stitching) in the SX Turbo are contoured and really soft. Like those of the Soul EX, they are heated, and so apt to be comfortable in summer as in winter. Unlike leather-covered seats, these won’t freeze bums in the winter or scorch thighs during hot summer days!

As for the trunk, while it’s not the largest in its class, it has managed to satisfy the expectations of its owners up to now; after all, the Soul has avoided the fate that befell the Nissan Cube. Its baseline 532 litres of cargo volume (when the rear seats are in place) place it between the HR-V (657 litres) and the CX-3 (408 litres). On the other hand, its maximum volume of 1,402 litres leaves it lagging far behind its Japanese rivals (1,665 and 1,528 litres, respectively). On the third hand, the trunk of the Soul does benefit from a low threshold and a large hatch, which provides a generous opening giving access to an open, unobstacled floor.

There’s one last detail that will likely make this boosted new variant even more attractive: its price. The Kia strategists have managed to offer it at the same price as a Soul EX fitted with the Premium package ($25,995 starting price). Buyers thus can treat themselves to a functional yet totally fly small vehicle, and just need to choose which way to lean: the Soul EX Premium for luxury or the Soul SX Turbo for performance. 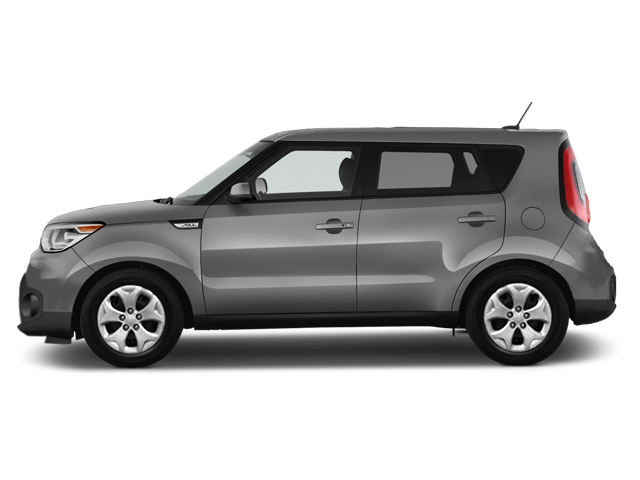 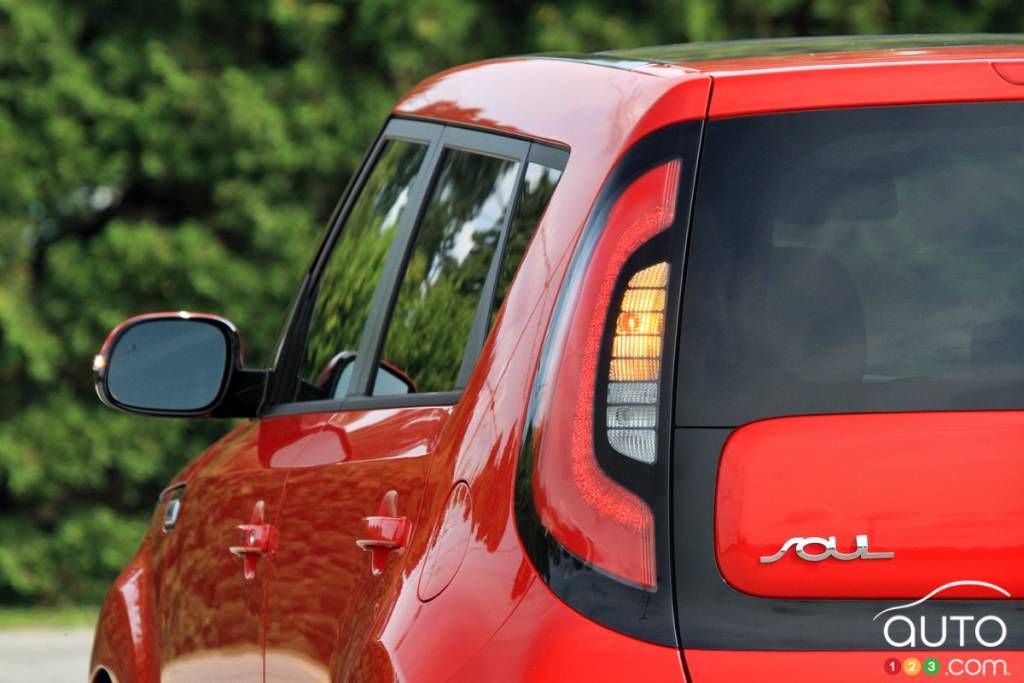 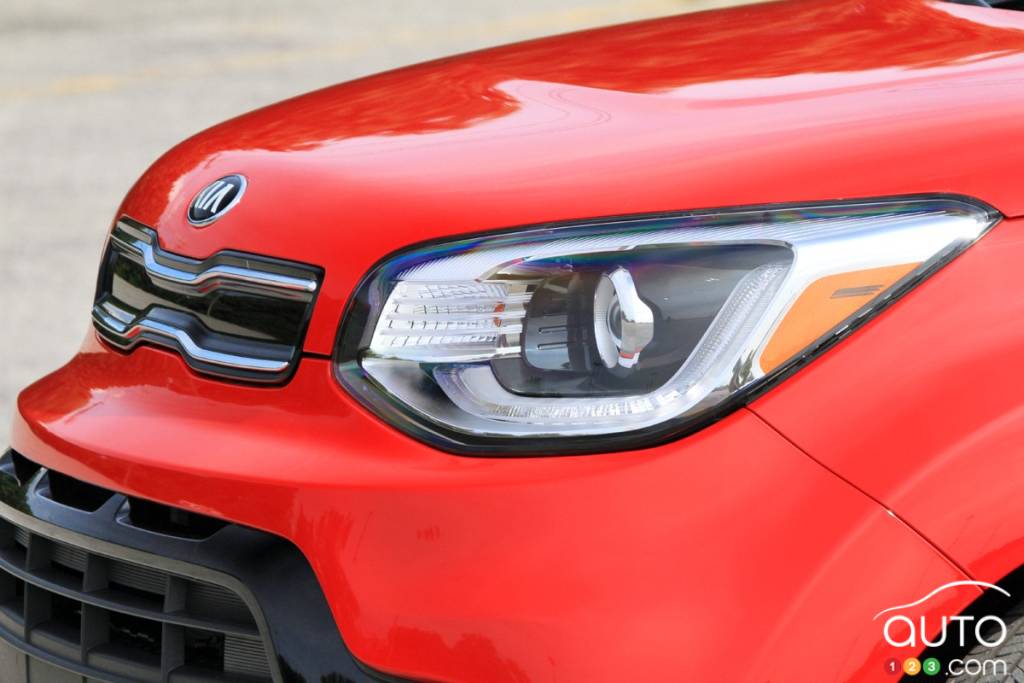 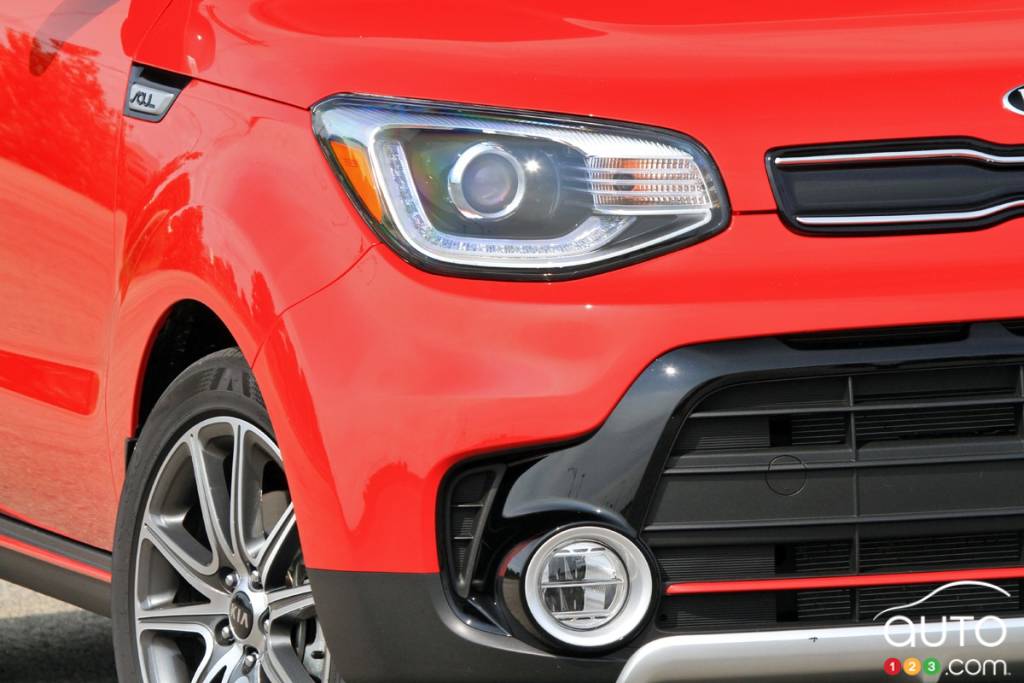 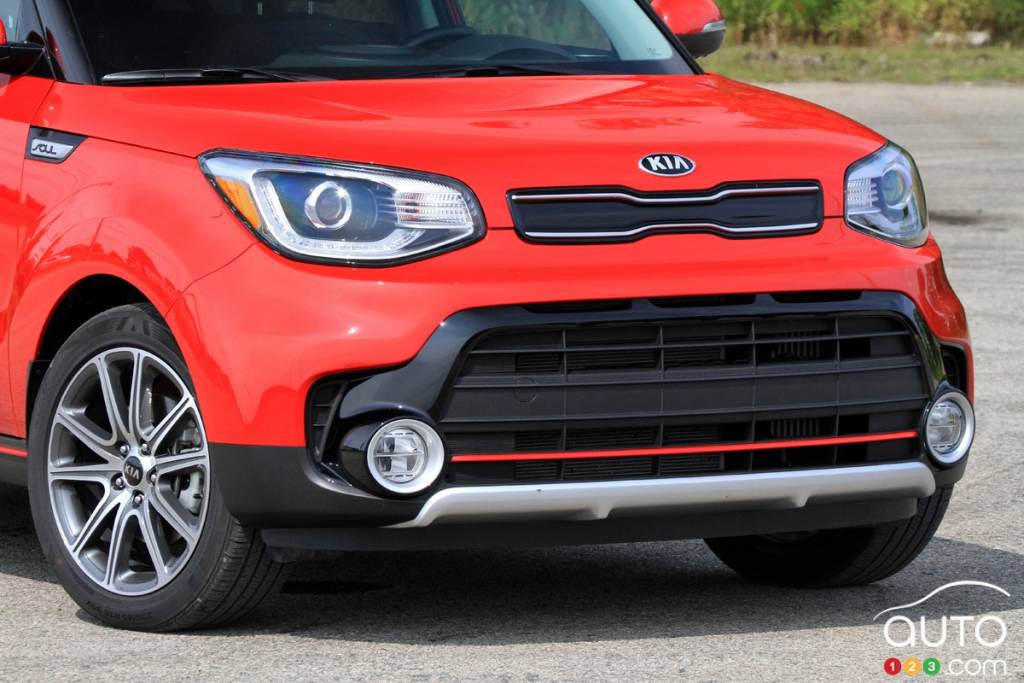