The beneficiary of Subaru’s extensive experience in all-wheel drive and its philosophy of focusing on the needs of active consumers, the first-generation Crosstrek launched in 2013 and was solidly successful. The all-new 2018 model, recently introduced to the automotive press at Subaru’s testing centre in Sano, Japan, had a few nice surprises in store for us.

Before going on, it’s important to remember that Subaru is but a small player in the automotive industry. All the same, the manufacturer has the significant advantage of being very tuned in to the needs of its market niches and of its clientele, so that it can present a product offering that is clear and based on all-wheel drive and its benefits. Subaru thus finds itself in an enviable position, enjoying robust sales and able to count on an extremely loyal client base that loves its rugged and reliable vehicles.

Even more reassuring is that Subaru is a modern, forward-looking company within the automotive industry. Its lineup includes popular and versatile vehicles (Impreza, Outback, Forester) as well as genuine sports cars (WRX, WRX STI, BRZ) whose excellence is the product of the manufacturer’s strong success in the car rally domain.

A dash or more of modernity
This forward-looking view has also translated into the opening of Subaru’s new HQ in the artistic and restaurant-filled district of Tokyo, the Shibuya Ebisu - also known as the home of the famous Sapporo brewery. The new building features a striking boutique on the first floor which showcases the automaker’s latest models and accessories as well as articulating the company’s values and mission. The floors where the actual work is done are open-air and brightly decorated. On the roof, a superb cafeteria that opens onto green terraces; the set-up is enough to make even grand hoteliers blush with envy.

Subaru’s current orientation is towards a conception and marketing pendulum that is swinging away from classicism and towards innovation, without abandoning the tested and true engineering that remains the foundation of the brand. 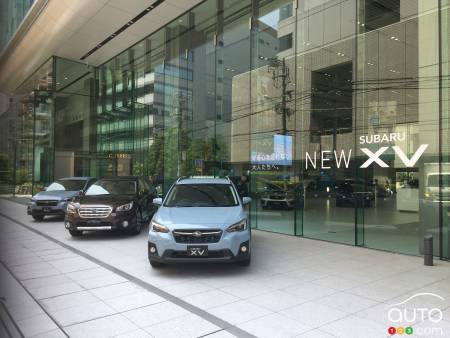 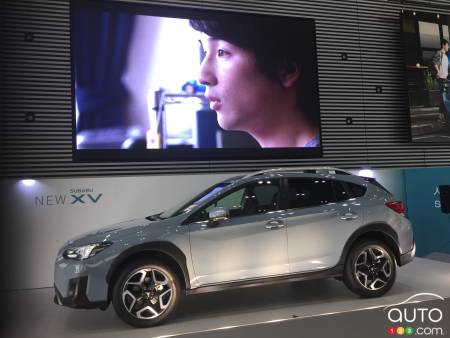 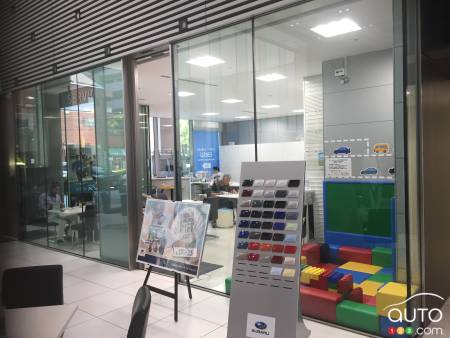 Work space in the Subaru’s new HQ in Tokyo 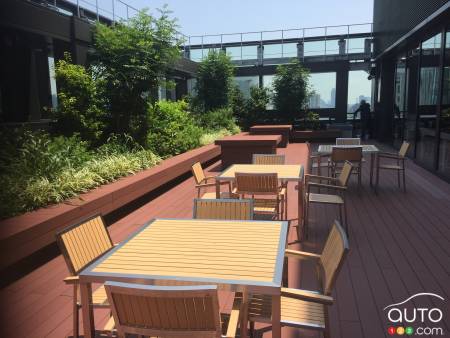 Cafeteria in the Subaru’s new HQ in Tokyo

The importance of the new global platform
The 2018 Subaru Crosstrek is built on the company’s new global platform, which also underpins the next-generation Impreza, Legacy and Forester. We learned in our discussion with Subaru’s engineers that they paid particular attention to the rigidity of the platform, and particularly to the safety cage that is really the heart around which the model is designed and built. And why not – Subaru has always been, and remains, synonymous with durability and safety.

In terms of its design, the second-generation Crosstrek is clearly an evolved version of its predecessor. It was conceived with sportiness and a dash of adventurous spirit in mind, as witnessed by the presence of lower mouldings and wing contours that protect the chassis. Then there’s the new grille, which incarnates Subaru’s DYNAMIC x SOLID design philosophy, and a rear section that integrates new LED lights, a revised spoiler and a larger hatchback.

All these elements make for an elegant and modern 2018 Subaru Crosstrek, which, without having completely blown up its proven and beloved design signature, should manage to stay fresh and current-looking in the coming years.

The new global platform has the advantage of being wider and longer, which gave the engineers room to offer passengers more legroom, as well as increased space for heads and shoulders. The trunk, for its part, is also larger, and the opening to it has been expanded to make access easier. Inside the cabin, the dashboard and the layout of the interior have been modernized as well.

One of the undeniable strengths of the new Crosstrek is its positioning in the market. For one thing it actually reaches through three segments: sub-compact SUVs (the Mazda CX-3 and others), compact SUVs (the Honda CR-V, etc.) and sport wagons (the all-wheel drive Volkswagen Golf Alltrak). The Crosstrek offers a lot of interior space all while being shorter in height than an SUV and sacrificing nothing in terms of ground clearance or approach or departure angles.

Driving pleasure at the Subaru testing centre
During our Japan visit, we had the opportunity to put the 2018 Subaru Crosstrek to the test on an off-road course that included a grass- and earth-covered butte, which served to demonstrate the great efficacy of both Subaru’s patented symmetrical four-wheel drive system and the new X-Mode function that helps control descent speed (available with the automatic transmission).

The performance of the vehicle was nothing short of impressive; no matter the challenge, the wheels did not slide. I should also mention the excellent work of the active torque split system, which governs the power delivered to each wheel.

Another section of the course consisted of a trail made of dirt, gravel and rock. There again, we found no fault in how the all-wheel drive system performed, and the suspension offered us a comfortable ride throughout. Above all, the chassis was devoid of cracks.

We then tried out our 2018 Subaru Crosstrek on a paved route, taking it up to speeds similar to what we’d do on our streets and highways to get a sense of what the 2.0L flat 4-cylinder (80% revised, according to the manufacturer) could do for us. Able to deliver 152 hp, this direct injection engine performed admirably, showing dynamic passing capabilities; most importantly, it proved less coarse and noisy than the old Crosstrek’s engine. The new CVT transmission box (with seven simulated speeds and paddle shifters on the steering wheel) has also been substantially upgraded. A new 6-speed manual transmission is available as well, and while it functions well enough, we preferred the automatic as it allowed us to consume 2 litres of fuel less every 100 km. As for the braking, the Crosstrek performs adequately, both in terms of endurance and of the modularity of the pedal.

As we had already discovered during our road test of the new 2017 Impreza, the new global platform from Subaru does wonders for the vehicle’s performance on the road, thanks to the much more stable and nimble chassis as well as more-precise steering (which has a ratio similar to that of the BRZ coupe). Overall, the 2018 Crosstrek is definitely more inspiring to drive than the model it’s replacing. 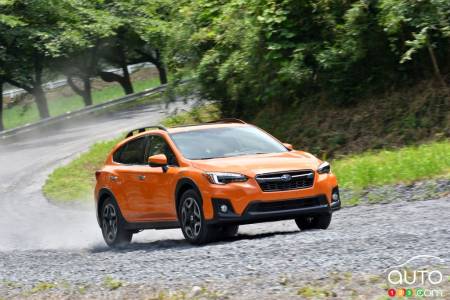 A champion?
It’s clear to us that an impressive level of care was taken when developing the new 2018 Subaru Crosstrek. This small sporty crossover will appeal strongly to the model and the brand’s many loyal fans, and especially should attract new ones as well. According to the company, 70% of sales are conquests of consumers switching from other brands.

We’ll go out on a limb and predict that one of the most common places you’ll see the 2018 Crosstrek in the coming months is in the parking lots at the entrances of hiking and mountain-biking  trails, and at ski hills when winter rolls around. That it sells starting at only $23,695 won’t hurt its cause one bit either. 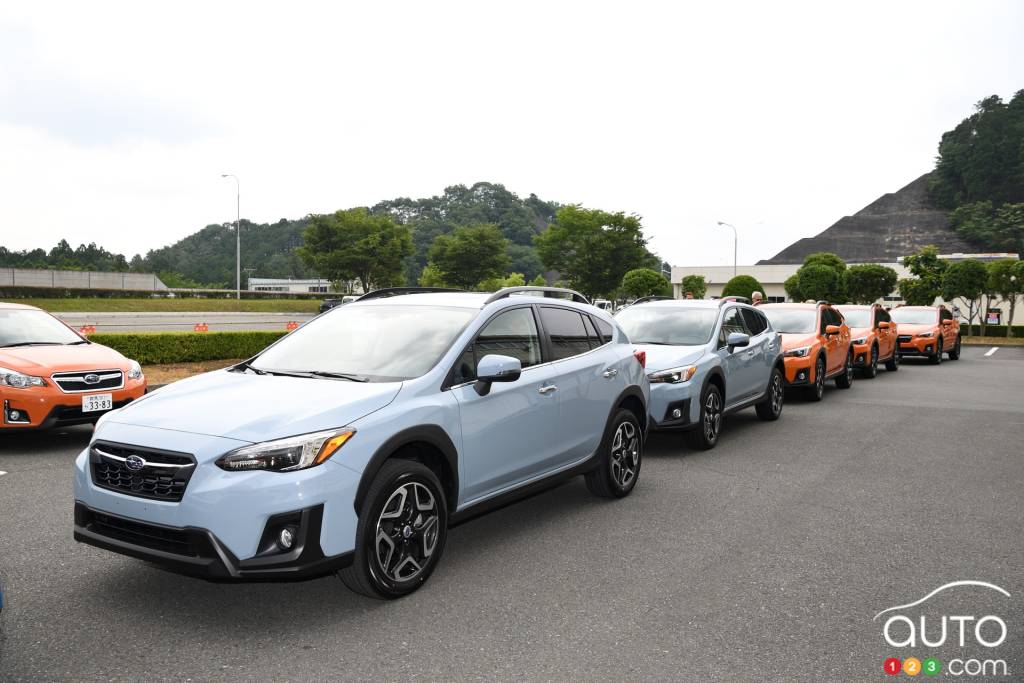 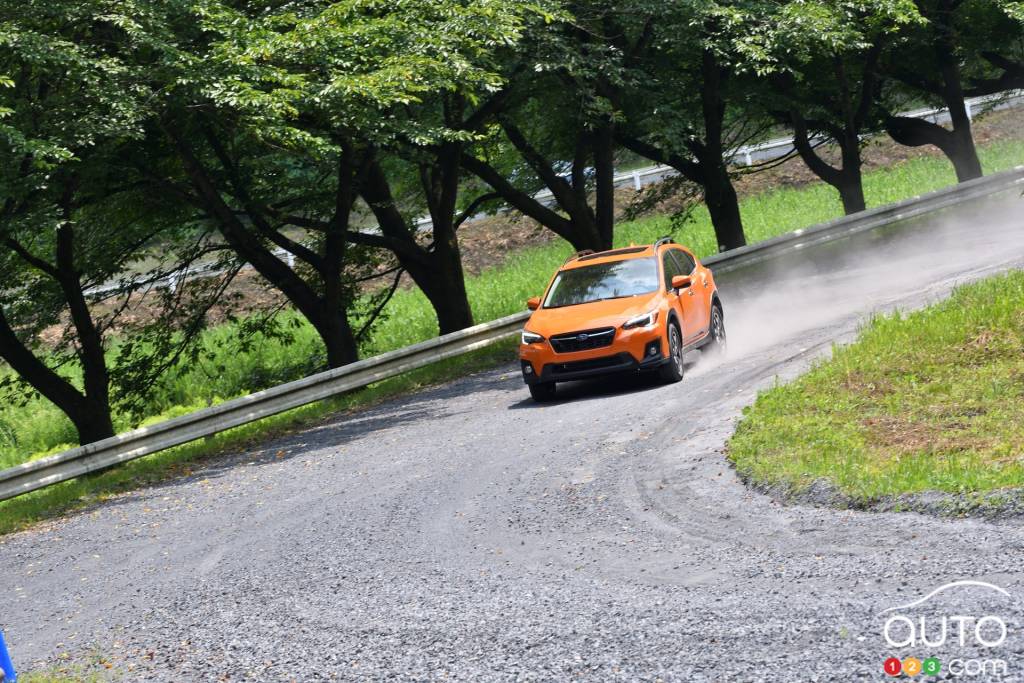 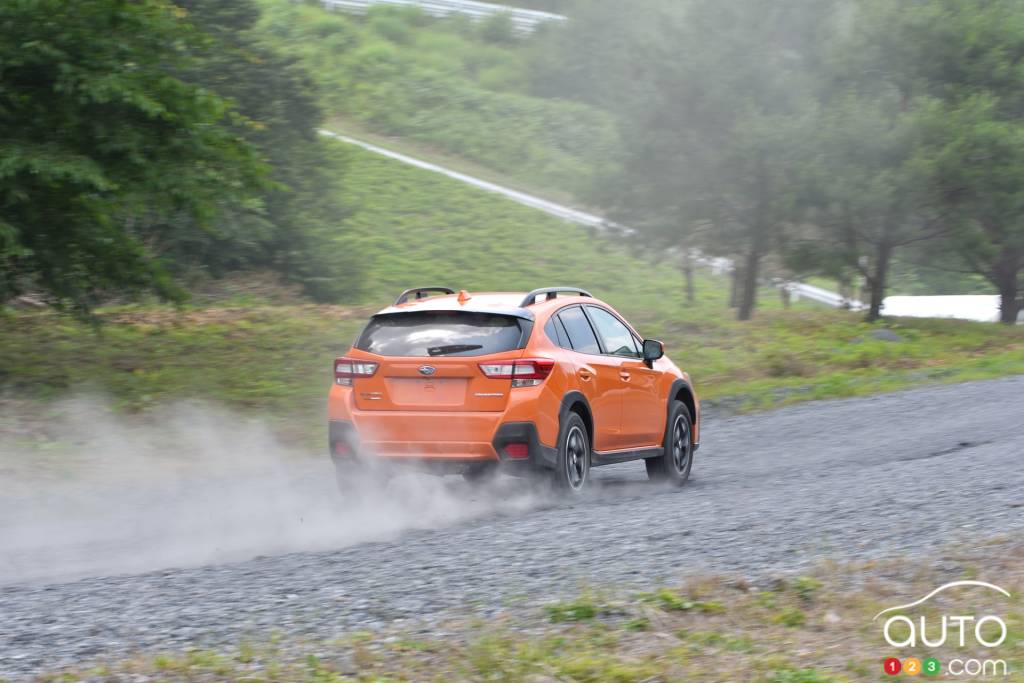 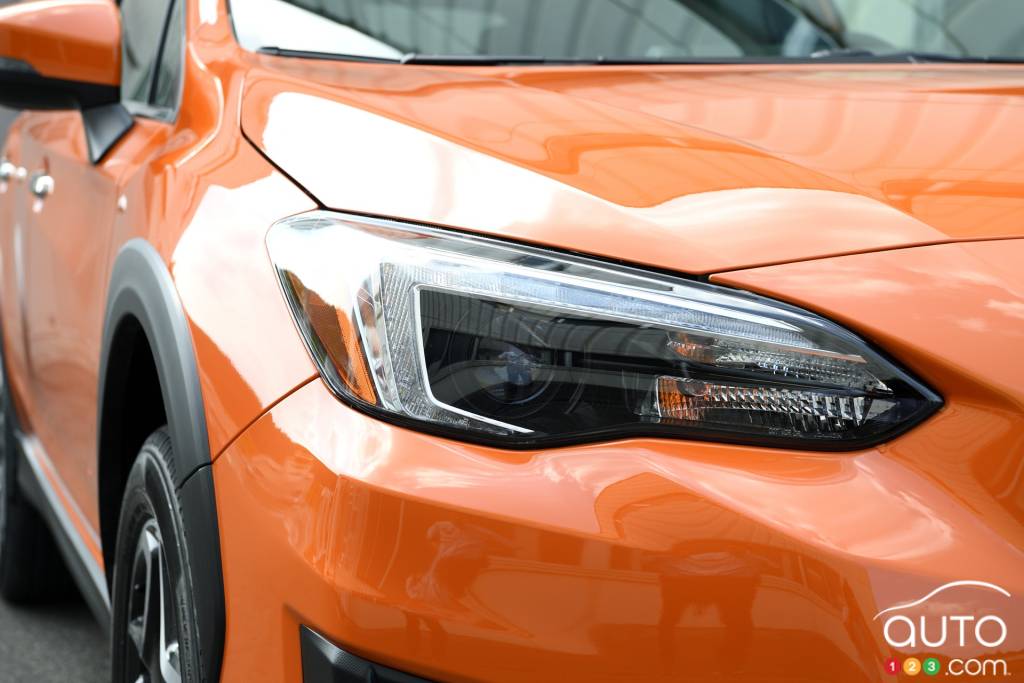 We now know the pricing and details for the new 2019 Subaru Crosstrek, set to make its debut at Canadian dealerships this month. Good news, the car’s startin...