It's always a challenge to learn a new race track. The process employed by the brain to commit to memory the twists and turns hidden behind blind crests and at the end of high-speed straights is one that requires patience and time - two things that are often in short supply when hitting a road course as a journalist for a quick afternoon behind the wheel of the latest performance car. Balancing the fresh neural pathways required to successfully navigate an undulating high-speed ribbon of tarmac with the more important task of evaluating the car, rather than focusing exclusively on the circuit, can present even more of a puzzle - unless, like me, you happen to be behind the wheel of the 2018 Subaru WRX STI.

In many ways, Subaru's modern classic has become the default answer for enthusiasts seeking an inexpensive, off-the-shelf entry point into the world of high-performance driving events. There's a very good reason for this: the STI sedan seems specifically designed to provide a safe, predictable and fun time on the track without blunting the thrill of the experience in the process. With a standard all-wheel-drive system stepping in between you and the car's ample turbocharged horsepower, and thanks to a reliance on mechanical systems rather than overly-invasive electronic nannies, Subaru's be-winged warrior is significantly more approachable than its specs would at first suggest.

This remains true for 2018, as the Subaru WRX STI and its more affordable WRX sibling each gain a host of improvements and tweaks designed to hone what is already a very effective package. To prove their point, Subaru invited me to Kelowna, British Columbia, to sample some of the best roads available in the Canadian province's mountainous interior on our way to a pit-stop at the country's newest track, Area 27.

The revised STI's drivetrain has been left well enough alone, its 2.5-litre turbo four-cylinder still producing 305 horsepower and 290 lb-ft of torque, managed by both a six-speed manual gearbox and the brand's Driver Controlled Center Differential (DCCD), which can be used to either automatically or interactively control torque distribution between the front and rear axles. Aside from minor efficiency-focused updates made to the DCCD, from a performance perspective the biggest change is found in the braking department, where the front Brembo calipers now sport six rather than four pistons, in addition to a searing yellow paint job. The rotors are larger, too, and the car's suspension system has been adjusted in a bid to add a smidge more comfort in regular driving.

Cosmetically, certain models of the WRX STI lose their fog lights in order to improve airflow to the larger brakes, a design decision that's matched with a slightly different front fascia, the presence of LED headlights that turn with the steering wheel, and the ability to easily trade the giant wing sitting at the back of the sedan for a smaller lip spoiler without having to swap trunks with a more modestly-equipped car at the dealer. Inside there's a quieter cabin that's been subtly updated on the dash and the centre console (with a much cooler multi-function display now in the mix), and which also features standard bright red seat belts that would cost you over a grand if you had to order them on a Porsche.

A more significant shift in personality is afoot when leaving STI territory for the more modest, but equally engaging world of the Subaru WRX. While similar efforts have been made vis-à-vis the sedan's appearance inside and out, as well as in terms of suspension development, Subaru has made two new investments that seem guaranteed to appeal to a certain segment of its loyal buyer base.

The first is the addition of the range-topping RS model (which includes more aggressive brake pads from Jurid along with Recaro seats), aimed specifically at owners who want to take a step beyond daily driving and sample the car's on-track capabilities. The other? Adding the EyeSight suite of advanced safety features (lane departure warning, adaptive cruise control, automatic braking) to cars ordered with the available continuously-variable automatic transmission, which makes up a surprising 10 percent of total WRX sales. Throw in triple-cone synchros for manual versions of the car, and a reprogrammed electric power steering system that now integrates the ECU into the motor, and you've got a model year update worth talking about.

It was fascinating to witness just how effective B.C.'s roads proved at mapping out the differences between the two models. The easy-to-live-with, everyday character of the Subaru WRX's 2.0-litre, 268-horsepower turbocharged four-cylinder engine and compliant yet still playful chassis setup contrasted sharply with the much more focused approach taken by the WRX STI's stiffer platform and more aggressive powerband. It was just as easy to lay back in the standard WRX and let the car float you down the highway connecting one set of rally-stage-ready dirt roads to the next as it was to turn off traction control and punish the throttle. The STI's hydraulic steering setup and more lively suspension tuning required constant communication between driver and car, coaxing you to keep turning up the wick to the point where it was suddenly time for yet another up-shift.

At the track, where we left the WRX in the parking lot and pressed our small fleet of STIs into lapping duty, the car's frenetic street pace transformed itself into a comfortable tempo of easily accessible grip and power. Dialling back the understeer inherent in most AWD cars was as easy as tapping the DCCD button and sending more torque to the back of the vehicle, and Area 27's long straights and interconnected corners laid down by track designer and former F1 champion Jacques Villeneuve revealed themselves to have a constant, if occasionally elusive, rhythm.

The beautiful thing about the Subaru WRX is that it's really all you need - until you decide you want more, in which case the WRX STI is waiting there for you right beside it in the showroom. For 2018, these fraternal twins underscore that graduated approach to affordable (starting at $29,995) performance without taking away from the original spirit of the cars that has driven them so far into the hearts and minds of sports sedan fans in the first place. 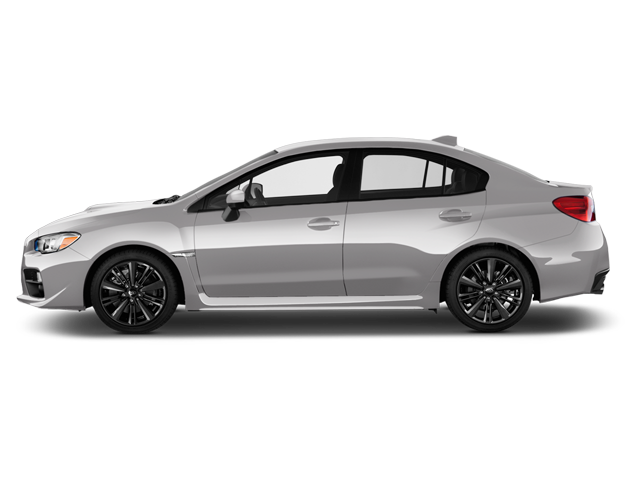 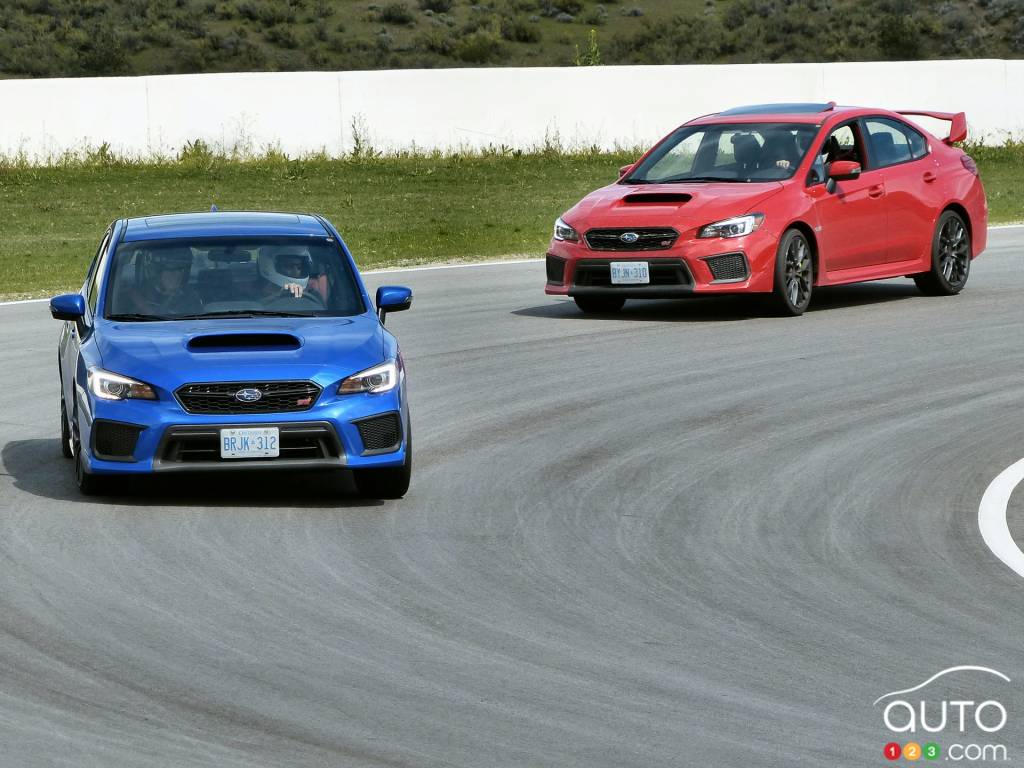 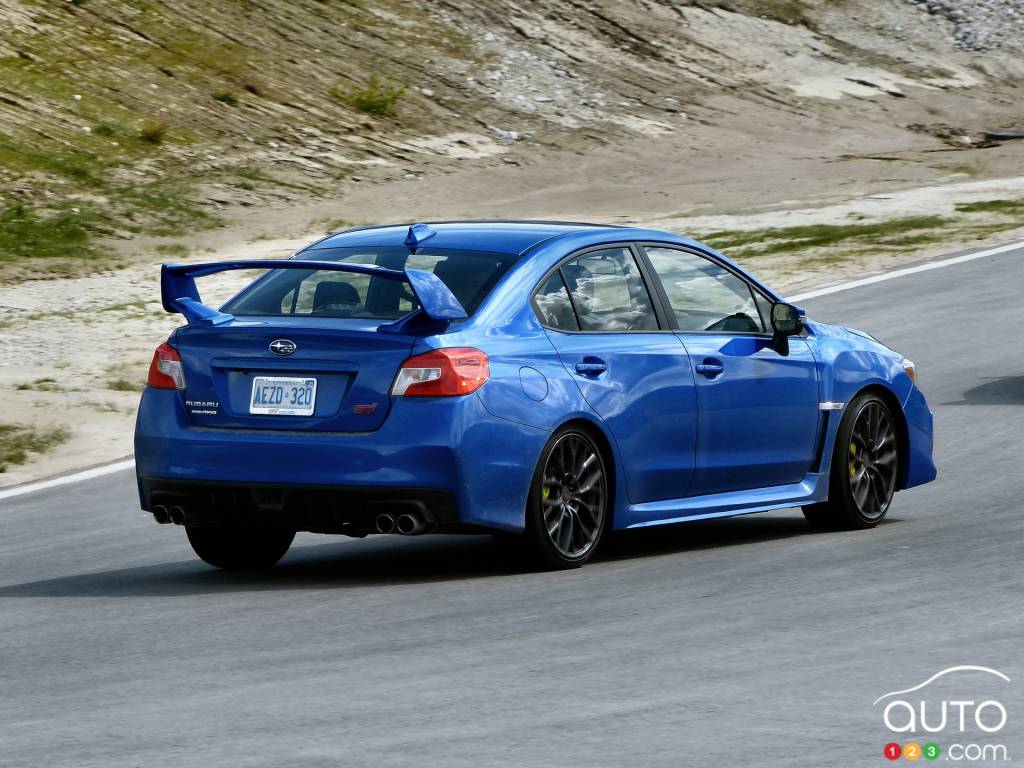 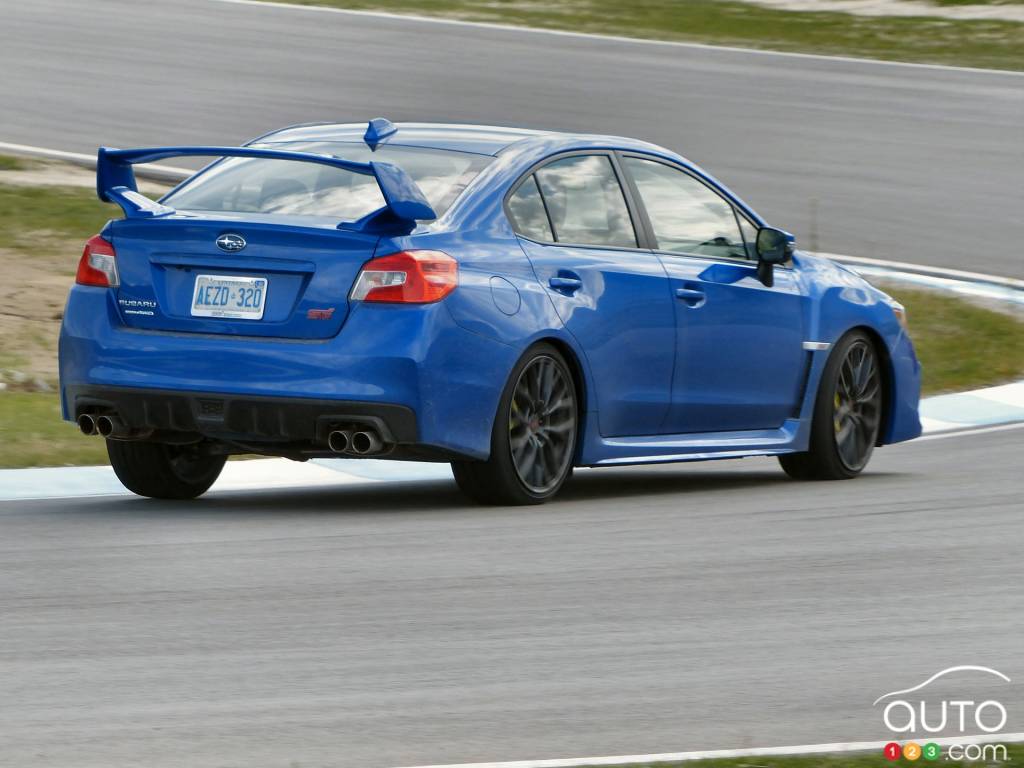 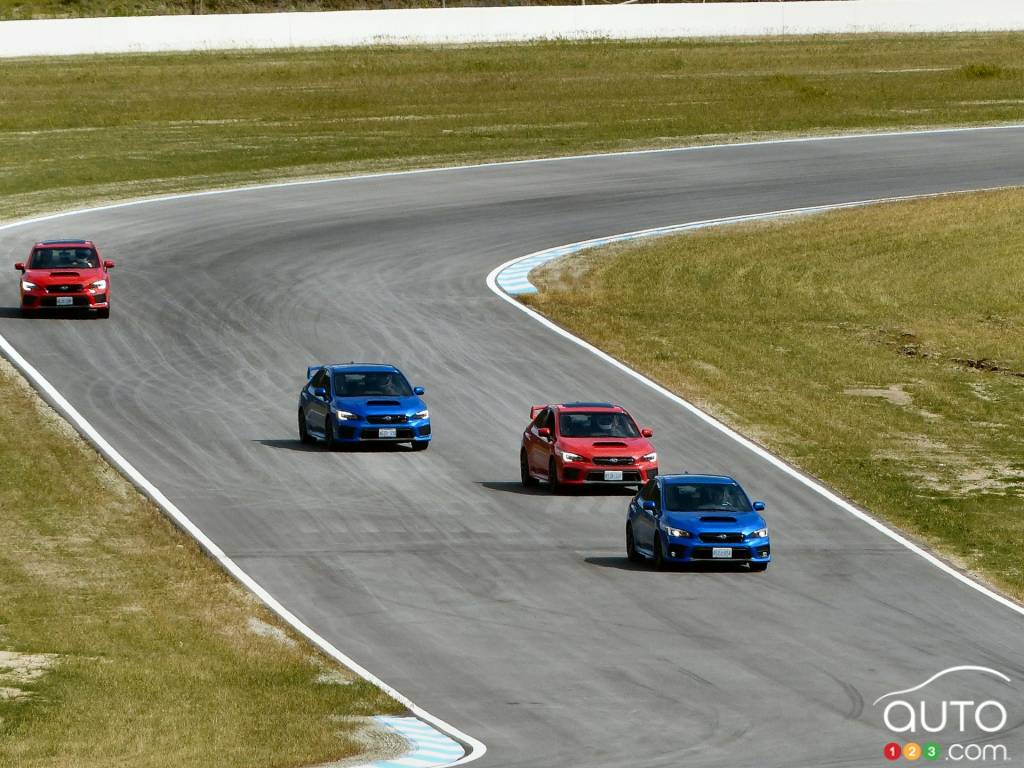 The 2018 Subaru WRX STI will be available at Canadian Subaru dealerships early this summer. We provide you here with pricing as well as features and equipmen...