When it comes to luxury SUVs and CUVs, Acura knows a thing or two. Their latest RDX is gaining accolades all over the place, while its bigger brother the MDX continues to be a big seller for the brand. Indeed, the two kind of share the honours when it comes to Acura’s top-selling models.

Thing of it is, while the MDX is a big seller, it comes as part of the Honda family, meaning it’s got performance chops, too, because that’s kind of what Honda does. Lest we forget, these are the folks behind the original Honda/Acura NSX, to this day one of the most underrated sports cars around. Now there’s a new one of those, too, because Acura knows its roots.

So it goes that the MDX has always had the talent to go toe-to-toe with the competition when it comes to performance and especially handling, what with the standard fitment of the super-grippy, super-responsive Super Handling All-Wheel Drive tech. 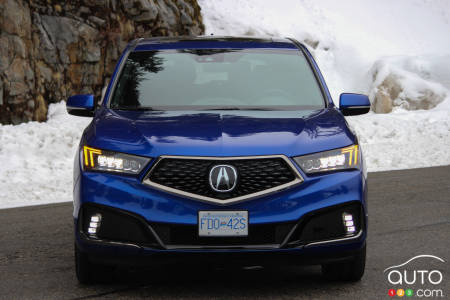 Dressed to the nines
Thing is, while the MDX has always walked the walk, it’s never really talked the talk; that is to say the branding, marketing and trim choices have never really championed its performance capabilities. Sure, they called 2017’s hybridized MDX the “Sport Hybrid”, but even then, you kind of always had the feeling they were doing so just so they could cover as many bases as possible with the nomenclature of their top trim. It didn’t really look any sportier than the Elite below it, and whoever bought a hybrid SUV -- this side of a Porsche Cayenne buyer or maybe a BMW X5 e-drive buyer -- for its performance, anyway?

Well, for 2019, that’s all changing with what you see here: the Acura MDX A-Spec. With those five letters and one hyphen, Acura’s biggest family member now has the flare to go with its size. Better yet, it’s a bit of a bargain with a $59,690 price tag that puts it smack in the middle of the MDX lineup.

While you can get other colours, my tester’s Apex Blue Pearl just goes really, really well with the “A-Spec” paradigm; you can almost picture it draped over the sharp edges of the NSX (while you can’t get this exact colour for your Acura supercar, the Nouvelle Blue Pearl that is available is pretty darn close).

Plus, the bright blue paint does such a good job of highlighting all the other bits that come courtesy of A-Spec-ing the MDX. The new fascia and its dark chrome grille whose spindles make it look like the car is moving towards you even when standing still, the gunmetal 20-inch alloys and smoked head- and taillights. It just wouldn’t look as purposeful in Modern Steel Metallic or Majestic Black Pearl.

The bumpers also get a different shape and there are twin chrome-tipped tailpipes, helping reduce the awkwardness of the MDX’S past look. They’ve also deleted the roof rails for an even sleeker look but not to worry, you can add them back on if you’re willing to part with the $2,562.50 (and 50 cents… really?) required for the Utility Package. This provides the roof rails as well as running boards. 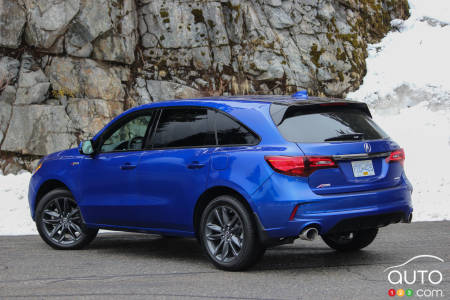 Inside, the open-pore wood inserts of other MDX models have been eschewed for carbon-look and piano black trim, while the seats get a tantalizing mix of charcoal-coloured suede and leather. It’s a little dark, yes, but there are highlights like white stitching, metal pedals and the occasional “A-Spec” badge, most notably on the steering wheel. Of course, the metallic red engine start/stop button returns from other MDXs, which I am very thankful for.

Otherwise, it’s standard MDX fare in here, which is no bad thing as it’s an ergonomic and roomy cockpit. I’m a big fan of the retractable surface between the front seats that gets a grippy pad, perfect for cell phones.

Speaking of which, Apple CarPlay and Android Auto come as standard, with the upper of the two display screens acting as your phone or tablet. It’s a little awkward to navigate those screens with the joystick as opposed to an outstretched digit, but it does actually make it easier to scroll through vertical menus for your playlists, contacts et cetera. 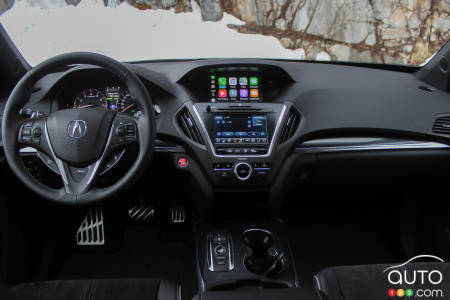 The lower screen, meanwhile, is a touchscreen and from there you can control your climate control (also done with more traditional buttons) or skip a song. That’s where the displays end, however; there’s no heads-up display, and no digital gauge cluster, their absence contributing to a slightly more old-school feel to the cockpit.

What a comfortable cockpit in which to spend time, though. The front seats may be a little flat, but they are supportive and 12-way adjustable. As far as the second-row seats go, like in front there’s lots of room, but if you want them heated, you need to look to the Elite trim, one level above the A-Spec in the lineup.

There’s also a third row of seating, but I didn’t find it to be as usable here as I did in the MDX’s Honda Pilot cousin. The second-row seats do slide forward to make for somewhat easier access, but I had a hard time getting back there (and then getting back out) nevertheless. The INFINITI QX60 and its tilt/slide seat is the leader in this segment by a country mile, though, so it’s not like the MDX is lagging way behind the likes of the Lexus RX L. Still, though, best leave them folded flat. Do this and you gain access to 1,230 litres of cargo space behind the second row. This is sure to come in handy if you decide to forego the roof rail upgrade. 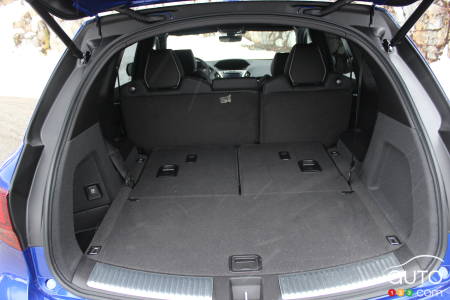 The style catches up to the substance
While the A-Spec conversion amounts to little more than a cosmetic upgrade, it doesn’t really matter all that much for the reasons I stated earlier: the MDX is so dynamically good dynamically in all its forms that it doesn’t need a set of stiff dampers or even any more power. The 290 hp and 267 lb-ft made from its 3.5L V6 is all you really need, and it’s helped by the close-ratio 9-speed automatic.

This powertrain combo manages to ensure that each element works in unison with the others to provide linear acceleration from rest, and plenty of naturally-aspirated power when it comes time for highway passing manoeuvres and so forth. I guess you could say it’s a bit of a shame that even though it’s not turbocharged it runs best on premium fuel, but that’s often the case at this level.

The transmission also comes with a pair of (very shiny) paddle shifters attached to the wheel, which I think I used more here than I have in any SUV before it – except, once again, for the Cayenne. They lead to some quick shifts, thought the system will intervene if it senses you’re letting the revs climb too high before yanking back on the right-hand-side paddle.

That wasn’t my favourite part of the MDX A-Spec’s drive, though. That would be the way that SH-AWD help you rotate through corners, and the way Acura has managed to disguise the MDX’s size with well-tuned damper and spring settings. You sit high in the MDX – it is an SUV, after all – but since there’s so little body roll as you weave through the bends, you tend not to notice it quite so much. 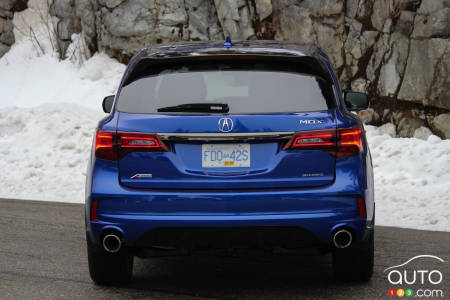 While the A-Spec doesn’t get the adaptive dampers the Elite trim gets, it does get a set of two-stage dampers that help reduce chassis vibrations as well as keeping suspension motion to a minimum for enhanced stability. It is such a confidence-inspiring ride, that I have to think that the family vacations and grocery/school/hockey practice runs that this is going to spend most of its time doing won’t even come close to testing its limits.

It’s actually almost a shame that most A-Specs – most MDXs, in general – won’t be given the beans that regularly as they truly are a wonder when it comes to body control. For now, I’ll just take solace in the fact that Acura has finally built up the courage to let the MDXs hair down a little, give it a little braggadocio. It’s a vehicle that deserves it, and it’s a nice window into how cool even luxury people-movers like this can be. It’s the MDX I’d have, that’s for darn sure. 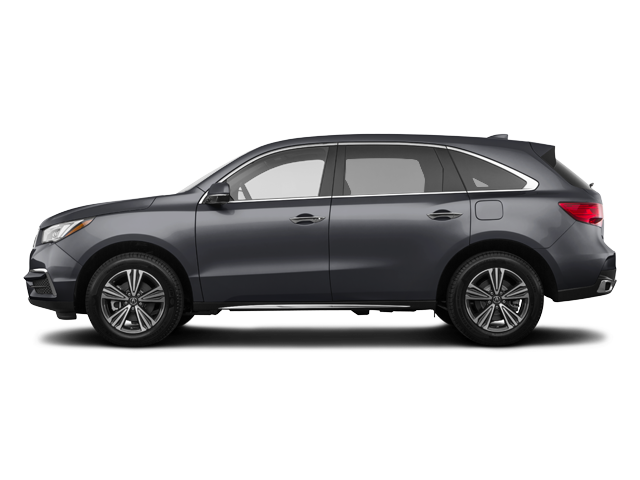 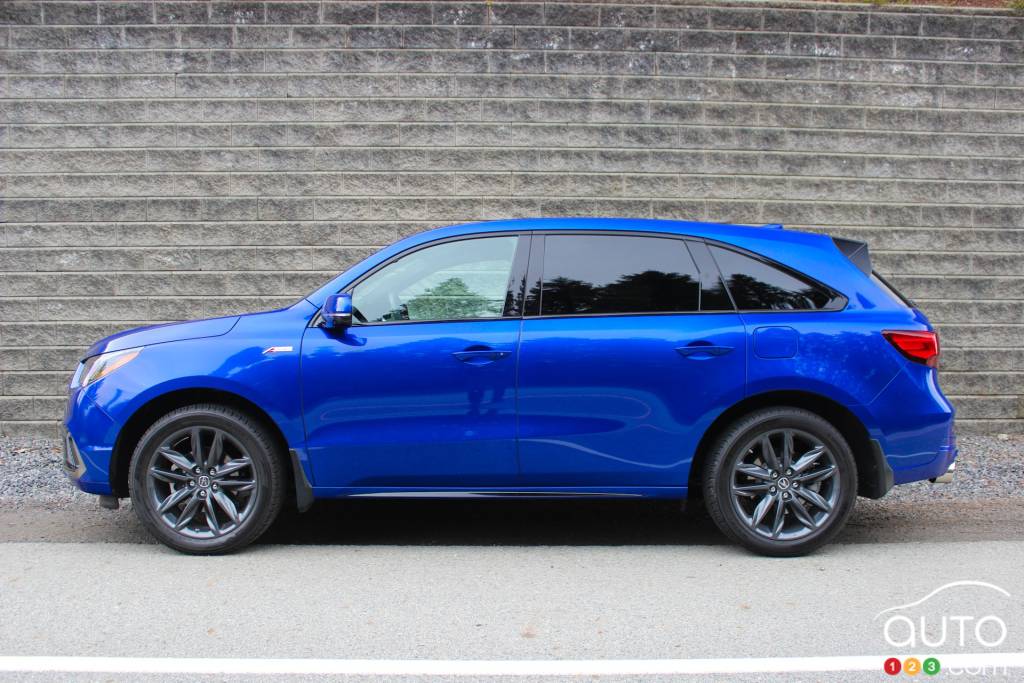 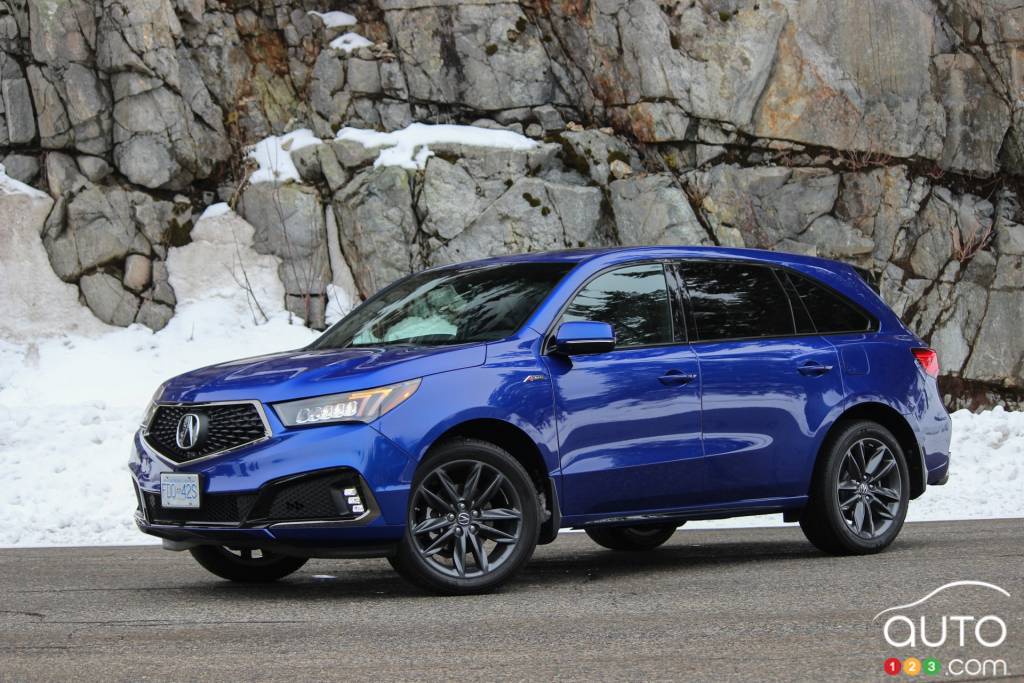 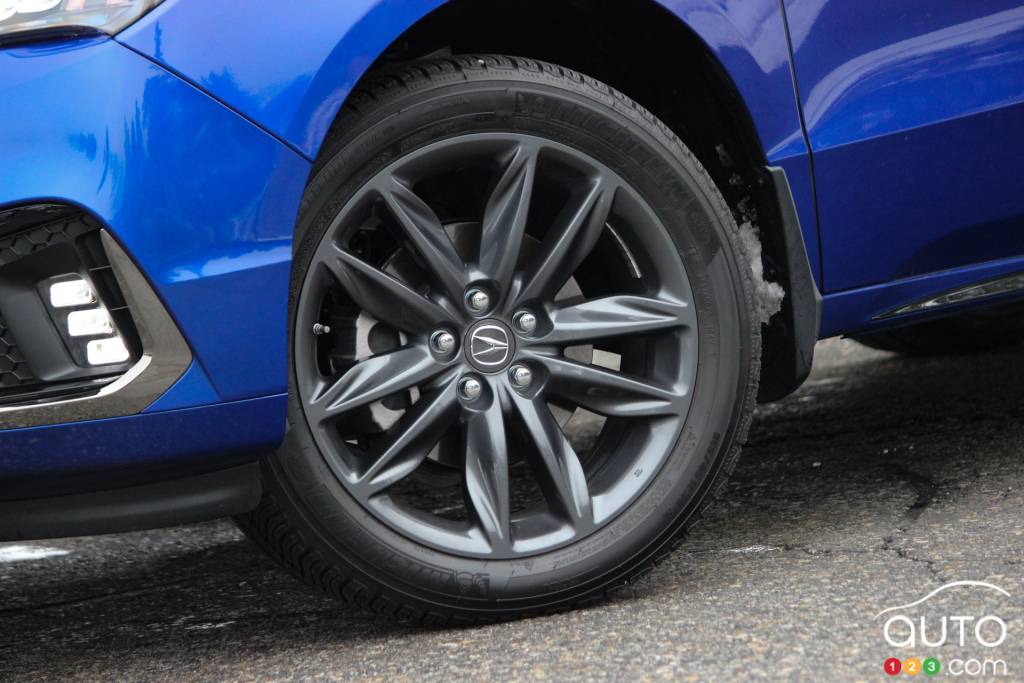 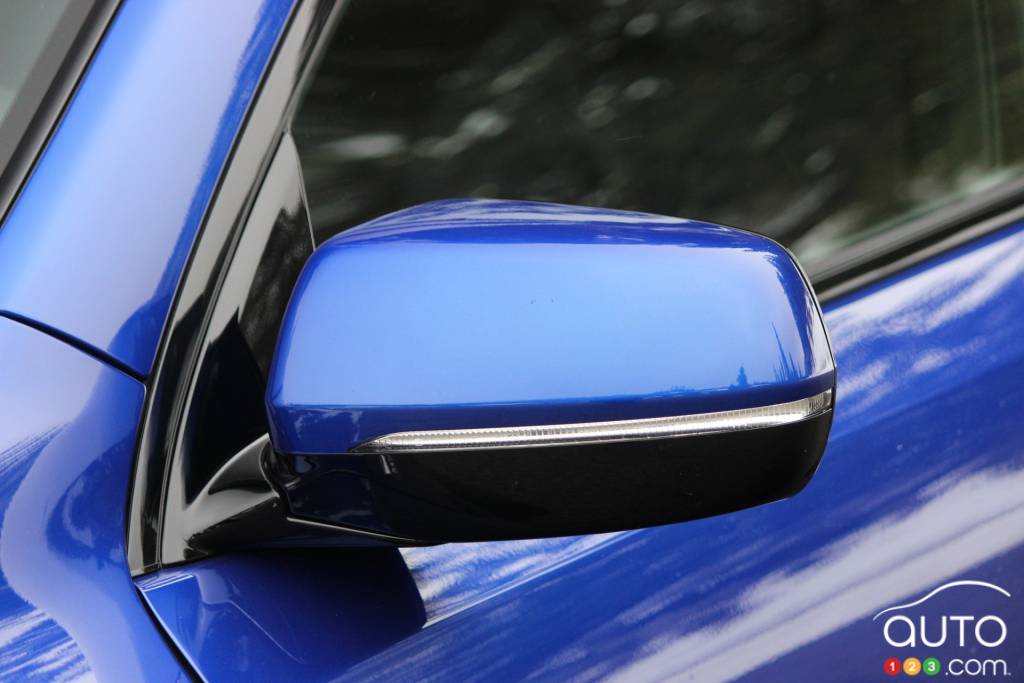 How to choose between the 2019 Acura MDX and the 2019 INFINITI QX60? Auto123.com compares two premium midsize SUVs, one of which offers an element of sportin...