The 2019 Audi Q8 is gradually starting to show its face in Canada’s more plush neighborhoods, after launching on the market a few months back.  The sportier sibling of Audi’s Q7 has taken on the role of flagship model of the brand’s SUV lineup.

Not wanting to leave the field wide open to its long-time rivals BMW and Mercedes-Benz, Audi produced this more aerodynamic version of the Q7. Judging from the thumbs-up it received from attendees at this fall’s Audi test drive, the newest member of the SUV fleet at Audi is set to be well-received among fans.

But the question remains: how does this sportier looking version of the Q7 behave? That's what I tried to find out recently. Now, it's important to remember that even though the new Q8 is equipped to run at high speed on a German highway, its real mission, especially here on Canadian soil, is to offer five people a super-smooth driving experience in a sophisticated, sumptuous environment.

Specifications of the 2019 Audi Q8

A Lamborghini Urus for (almost) a third of the price!
For those who follow the automotive industry, the MLB evo platform is no longer just an abbreviation used by employees inside the Volkswagen Group. On this architecture sit the latest midsize SUVs from the VW group (the Audi Q7, Bentley Bentayga, Porsche Cayenne and even Volkswagen Touareg, which is still available outside North America). The fastest of that bunch is the Lamborghini Urus, a high-sitting beast that I was also able to put to the test earlier this year.

The latter is also the SUV that kept coming to mind during my time with new Audi Q8, first of all because of its frameless doors (similar to the Italian model) as well as the two touchscreens in the centre of the dashboard. Pull back to a wider vantage point, and you see that the overall proportions of the two protagonists are very similar, despite two completely different designs.

There’s one other notable difference, and it has to do with the pricing. The Lamborghini Urus costs $232,000 in its most basic version, while the Audi Q8, delivered in this case in 55 TFSI Technik, carries a starting price of $88,800. As per the usual custom for press vehicles, my tester was garnished with $17,735 of added options to help ensure I’d be impressed, so the final price came to $106,535, before the transportation fees of $2,095.

Price aside, my view is that the Q8’s designers nailed things with this sharper-looking SUV; most significantly, I have to congratulate Audi for not ceding to the temptation to go the “fastback” route, a recipe used by both rivals in this segment. Audi's approach is subtler, and that’s perfectly fine by me.

The Audi interior - still the reference?
For more than a decade, the German manufacturer has accumulated accolades for the quality of its interiors. Everything is rigorously assembled in the Q8, just like in every other current model in the lineup.

The dashboard, for instance, is beautiful to look at with its three high-resolution screens. Behind the wheel, the bird's eye view of the surroundings is stunning and the screen is easy to use. A simple glance under the windshield line and you can find your way out of a neighborhood you don’t know, and then there’s the head-up display that can guide the driver in real time.

The other two touchscreens also surprised me for their ease of use and the quality of the resolution, although I still believe it’s easier to handle three knobs for ventilation rather than a multifunction screen.

Despite the 22-inch (!) wheels, The Q8 proved itself a pleasant travel companion. The ride is smooth, the seats are very comfortable (with first-row massage function included to seal the deal), and even the second-row seats are plenty soft and plush enough for long trips. By forsaking the third row of seats found in the Q7, the Q8 becomes quite roomy for every passenger, while the luggage compartment offers generous cargo space.

A sporty line, but…
Despite its good looks, the Q8 isn’t exactly sporty under the hood. It lacks at least fifty horses to give it more go from a standing position. Again, the 335-hp 3.0L supercharged V6 is plenty enough for most, but for “enthusiastic” drivers, the Audi Q8 disappoints, regardless of its very neutral handling. Even when I played with the drive modes (part of the Drive Select system), the Q8 failed to satisfy my desire to enjoy dynamic acceleration.

On the bright side, the 8-speed automatic transmission does an excellent job if you overlook the slight delay coming off a stop sign.

This lack of punch is a shame, because the Q8 has everything to offer a sporty and composed ride: the all-wheel-drive Quattro system, rear-wheel steering (yes sir!), an adaptive suspension and even steering that delivers enough feedback to get a good feel of and for the road, especially with those 22-inch wheels.

Because of the Q8’s substantial weight, the vehicle is also penalized when it comes to braking distance. Let's just say it’s recommended to get used to the brakes before attempting more serious manoeuvres.

And then – and it's not a flaw, exactly – there's the almost eerie silence inside the cabin, mostly because of the thicker side windows. It wouldn’t be difficult to give this big vehicle a little more sound, if only to give the driver the illusion they’re at the wheel of a more potent vehicle. This will likely be the mission of the S Q8 and RS Q8.

The last word
After a few days at the wheel of yet another crossover, I realize once again that appearances can be deceiving. The 2019 Audi Q8 is a very beautiful vehicle, very well built and even pleasant to drive when the road gets a little windy, but it lacks a few horses under the hood.

I don’t think this situation will hurt the Q8, especially to motorists who spend most of their time in traffic every day, but still, I believe the base Q8 should really deliver a little more oomph when you hit the accelerator. 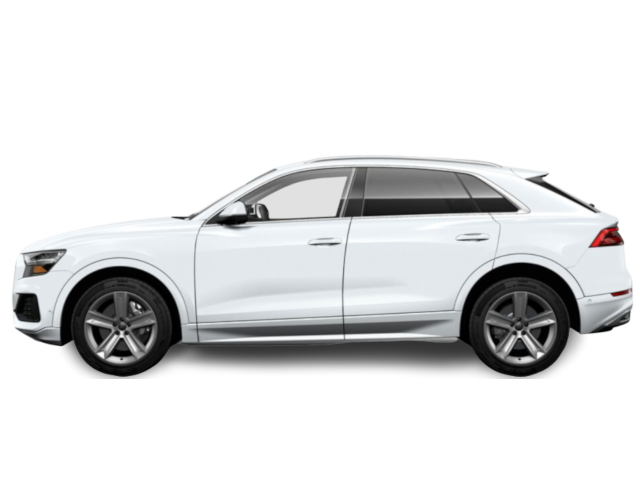 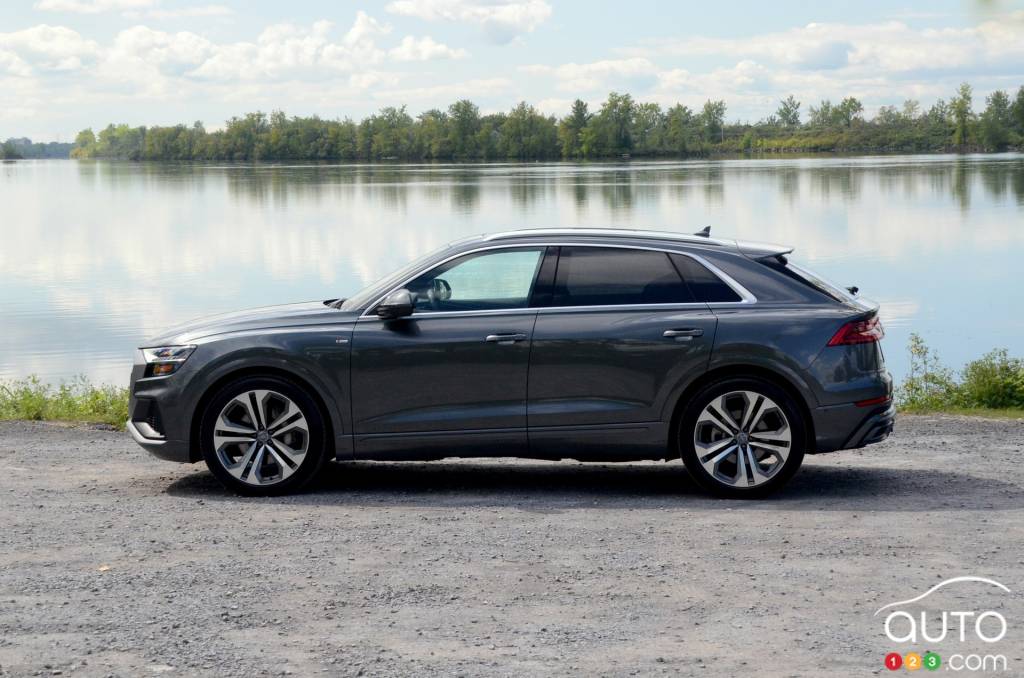 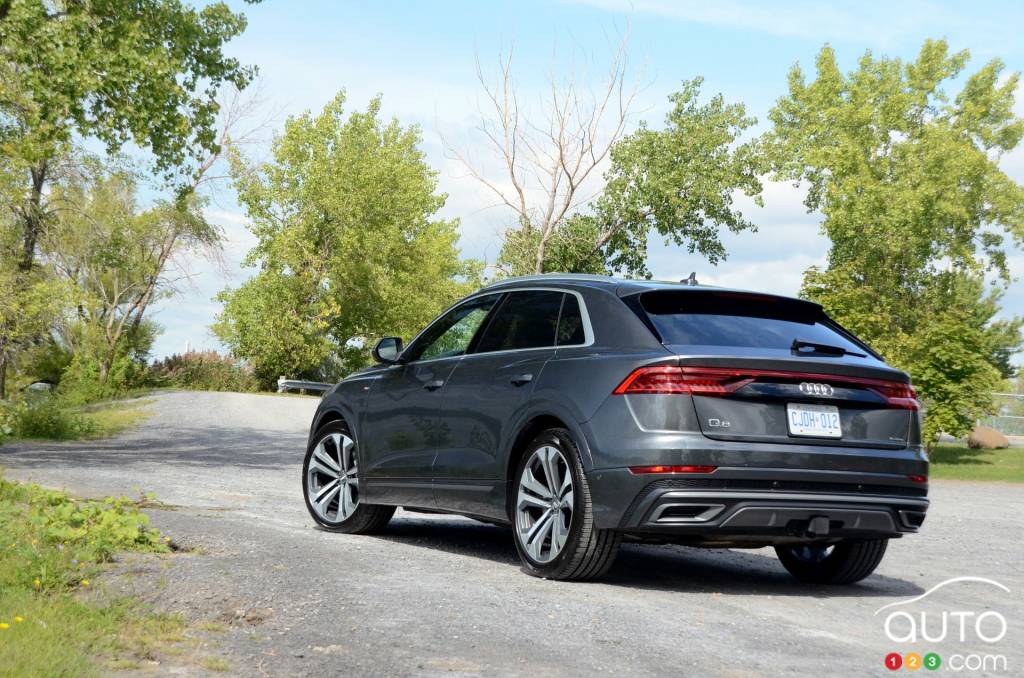 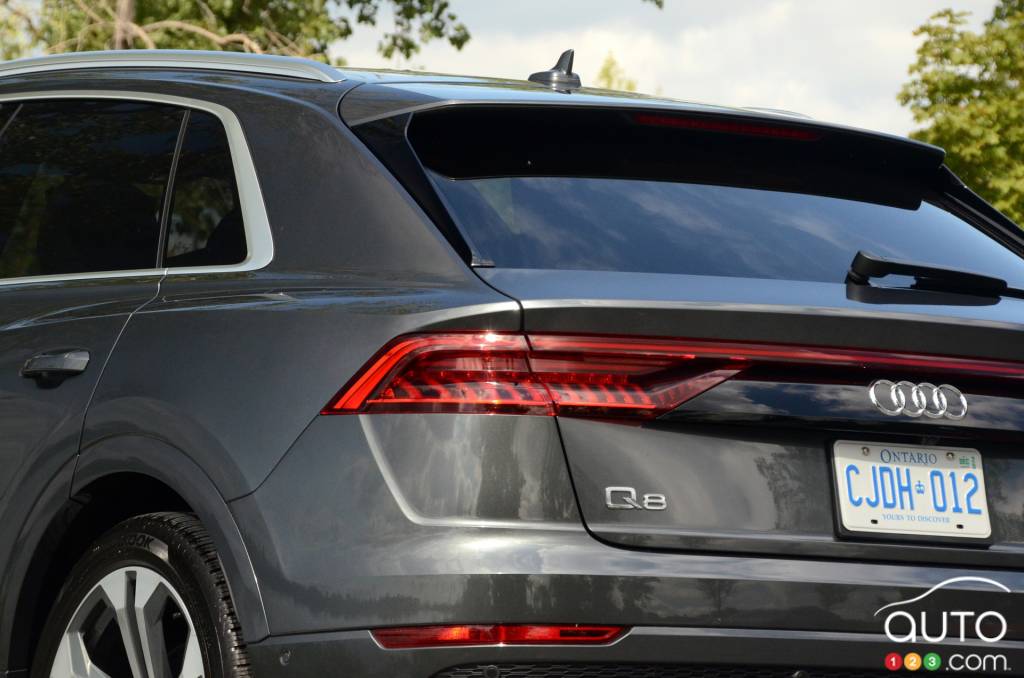 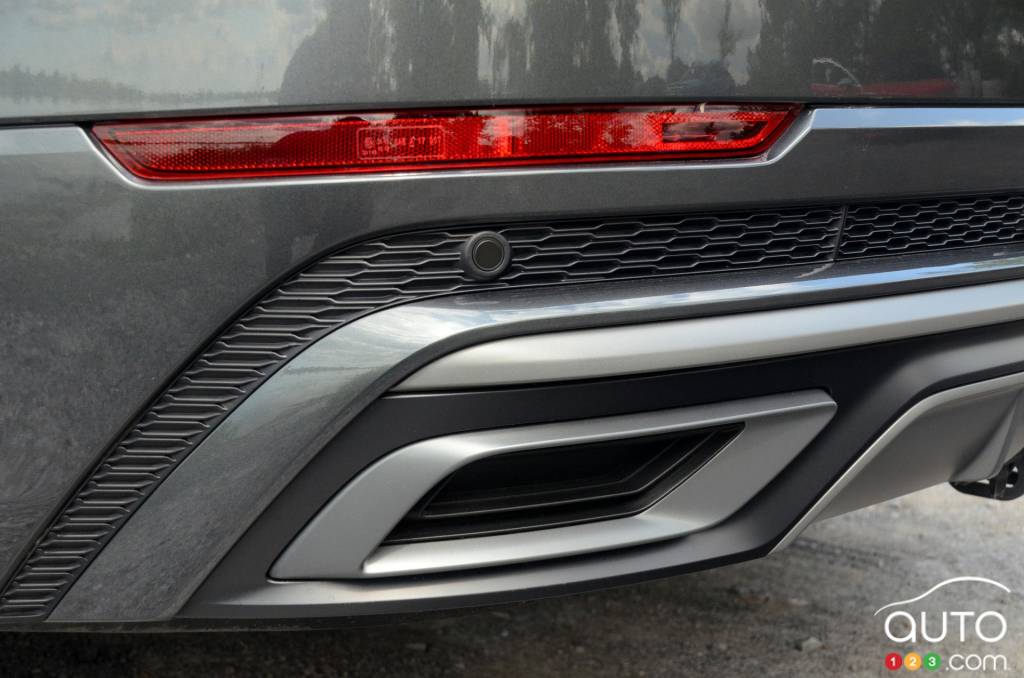