As much as we knew that in this day and age, Alfa Romeo had to produce an SUV to remain competitive, it was still a little hard to take when the Stelvio first arrived with its classic Alfa front-end but without all the other classic Alfa-ness such as four doors, a drop top, or rear-wheel drive. That said, the Stelvio looked a piece even amongst established competition from the likes of the Porsche Cayenne and BMW X5, so it was a little easier to give the storied Italian manufacturer a break.

Plus, it was now owned by Fiat-Chrysler Automobiles, which meant a utility model was inevitable, if only because the rest of that group’s portfolio is so big on SUVs, and the Stelvio had to sell here in North America.

Well, now they’ve released the hot “Quadrifoglio Verde” (QV) version, and classic Alfa Romeo lines or not, it has taken the Stelvio up a notch in the eye-candy department. Never mind the powertrain, which we’ll touch on later.

Styling-wise, it ticks all the right boxes. The QV designation adds huge cannon-like quad tailpipes, a darker traditional scudetto triangular grille and seriously gorgeous 20-inch rims that are lingerie-like in the way they hide – but only just -- the yellow brake calipers and ceramic discs behind them. The Misano Blue Metallic paint, meanwhile, is the cherry (blueberry?) on top of what is a stunning styling package. The stance and profile are right on, too, which is no doubt helped by the fat 255-section Pirelli P Zero performance rubber. 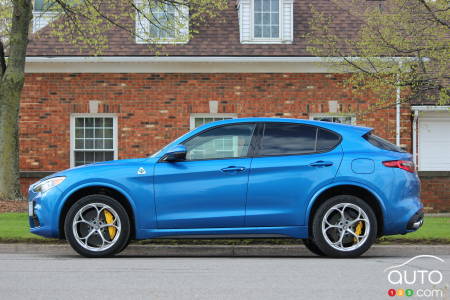 Inside – on my car especially – there’s little denying that you’re in a special Stelvio. I say that because my tester had the optional ($4,100) carbon fibre seats that make no bones about their construction thanks to the seatback being completely exposed, revealing all that shiny weave underneath. They’re not cheap – and they aren’t heated, unlike the standard seats – but they’re by Recaro and they hold you firmly in place. You also get from them a perfect driver position, which you’re going to want if you really plan on pushing the limits in on of the most focused performance SUVs you’ll find on the market today.

Power from the twin-turbo V6 (which, it has to be said, looks like it belongs in an SUV this good-looking thanks to its shiny black valve cover crowned with the traditional four-leaf clover emblem) is rated at 505 hp and 443 lb-ft of torque, enough to propel the Stelvio QV to 100 km/h in about four seconds on its way to a top speed of 285 km/h. That latter figure, of course, doesn’t matter so much in the real world but the accelerative force cannot be denied as it will pin you back in your Recaro under full throttle like few other SUVs this side of a Jeep Grand Cherokee SRT or Porsche Cayenne Turbo.

You tip in, hold on, and proceed to do your best to snag the right shift paddle (easy to do because these sickle-shaped metal beauties are huge) for an upshift lest the car get mad at you for not keeping pace. I’ve driven the Stelvio’s Giulia sedan sibling, and I don’t’ remember it feeling quite this assaulting on the senses. What pace this SUV has! What panache! What’s the point? 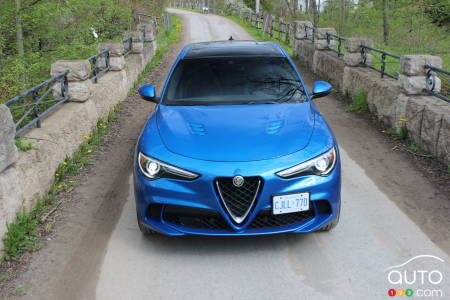 Whoa, hold on there, cowboy. What do you mean, “what’s the point?” SUV or not, this is still the top performance spec of an Italian sports utility vehicle. This SUV needs to prove that, at this price level ($95,000 before options), it can compete with the establishment. It’s a halo vehicle, after all, and that’s kind of what halo vehicles are all about. I’ll tell you what: when it comes to powertrains, this is right on the mark.

Of course, power is all well and good, but it has to be able to handle itself, too. It needs to be able to eviscerate bends the same way it does the quarter mile (or the time between stoplights).

To achieve this, Alfa has fit the Stelvio QV with standard adaptive dampers, which you can either set yourself or let the computers do for you. There are four drive modes – Normal, Advanced (read: Eco) and Race. Select the latter and the dampers are automatically firmed up. You can loosen them with the press of a button but curiously, you can’t turn them on with the press of the same button in any of the other drive modes. I guess it makes sense since the QV is quite firm even before the dampers are set to “firm”. Still, this, along with the inability to turn off traction control, smacks of a little bit of short-sightedness when it comes to the Stelvio’s development. 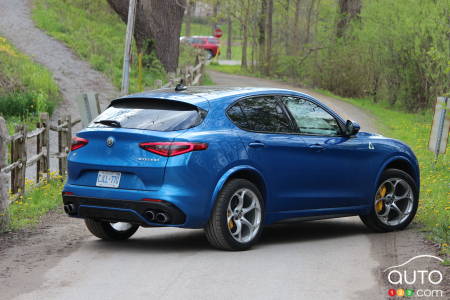 You won’t hear any complaints from me when you actually want the firmer settings, however. The Stelvio can carve a corner just as well as the competition, and does so with a nicely-telegraphed attitude that lets you know what’s happening underneath each wheel, plus it’s got an ultra-responsive steering rack. Which, it has to be said, is great for aggressive driving but a little nervewracking when highway cruising.

The brakes, meanwhile, look the business because they are the business – once you warm them up. At first, as ceramic rotors often are, they’re loud, rumbly and grabby so you have to be wary. After that, though, they grab and hold for dear life almost as soon as you depress the pedal, and they will not fade. My guess is you could probably track this thing, and they still wouldn’t fade; when you’ve got 15.4 inches of surface area up front and 14.4 at the rear (and six and four piston calipers, respectively), they tend to be pretty resilient. 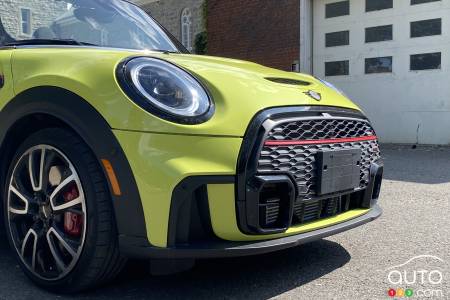 At the wheel you have to monitor yourself – how old school - because there are hardly any driver aids to speak of. There’s no lane-keep assist or active cruise control, because Alfa obviously wants you to focus on the driving when it comes to the QV. Sure, there are the cursory SUV bits like a cargo bay with adjustable rail-mounted dividers (I just took them all off in order to better fit my wares), room for a family of four, AWD and a backup camera (though it only takes up half the display; I’d prefer it fullscreen) but if that’s primarily what you want, you surely don’t have to drop the kind of coin your Stelvio requires (starting price is $53,345).

Indeed, you’re spending that much on your Stelvio because you want to be seen and heard (you will be; those tailpipes aren’t just for show for, they emit a proper, burbly, muscular report), and you want your hair set on fire when you really mash the throttle pedal. In short, you want what the Italians – and indeed, Alfa Romeo itself – is best known for: power, panache and style. Thanks to the Stelvio QV, we now know that you can have all that, regardless of body type. 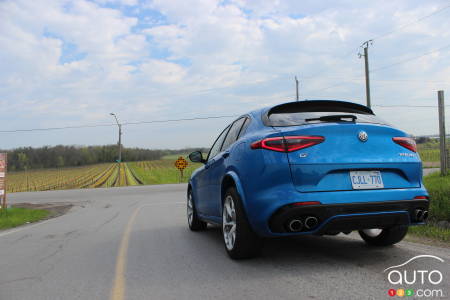 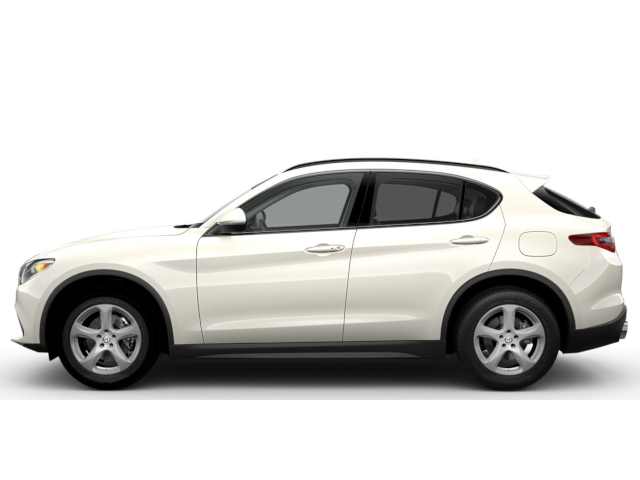 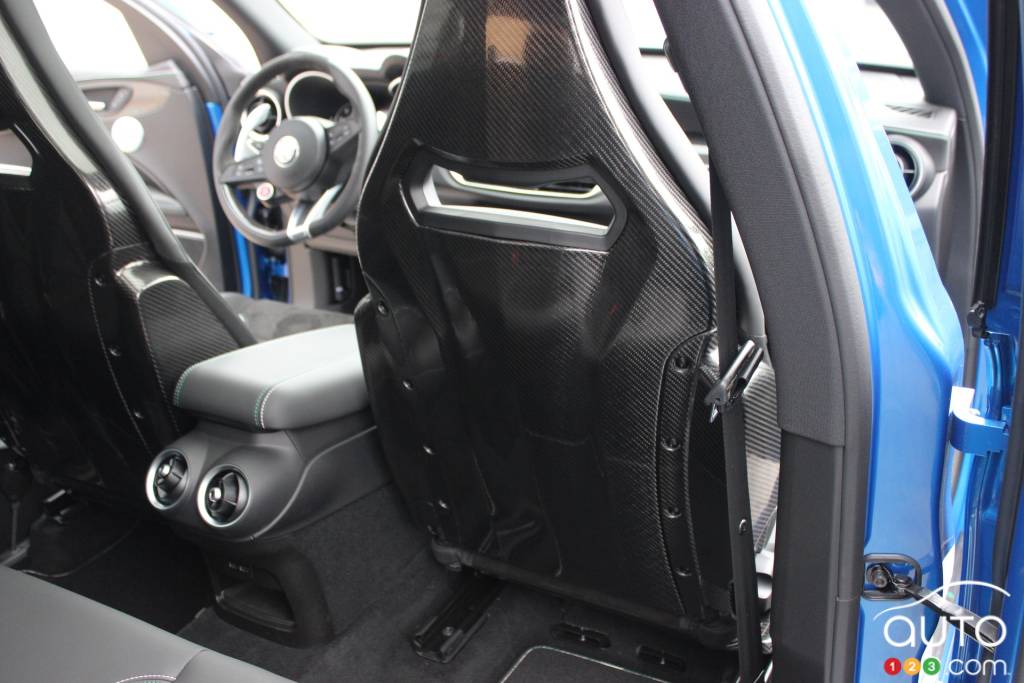 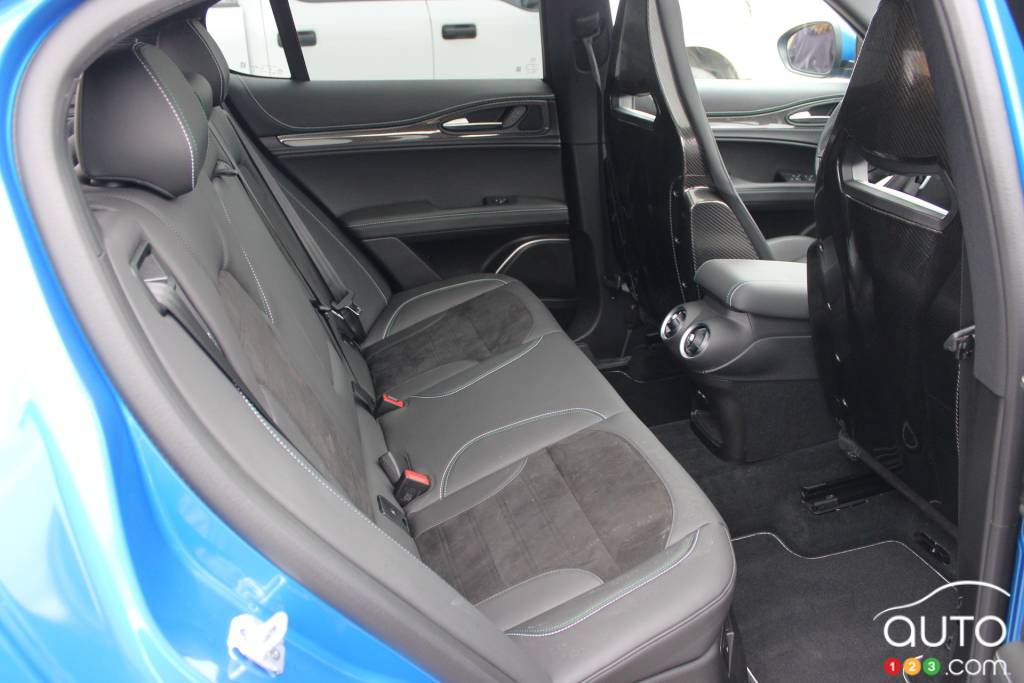 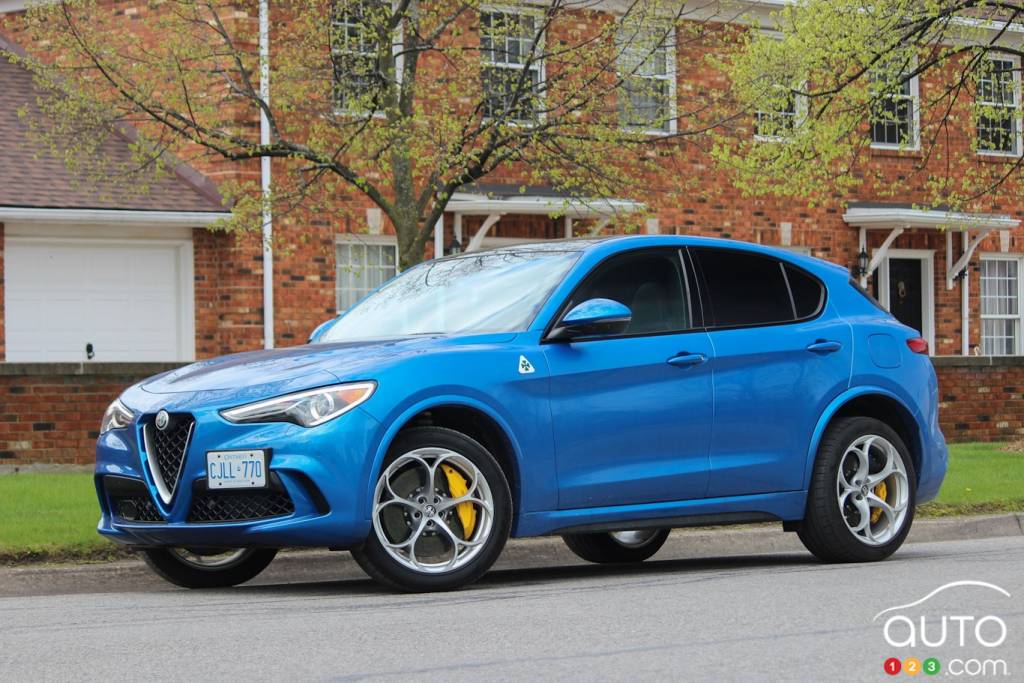 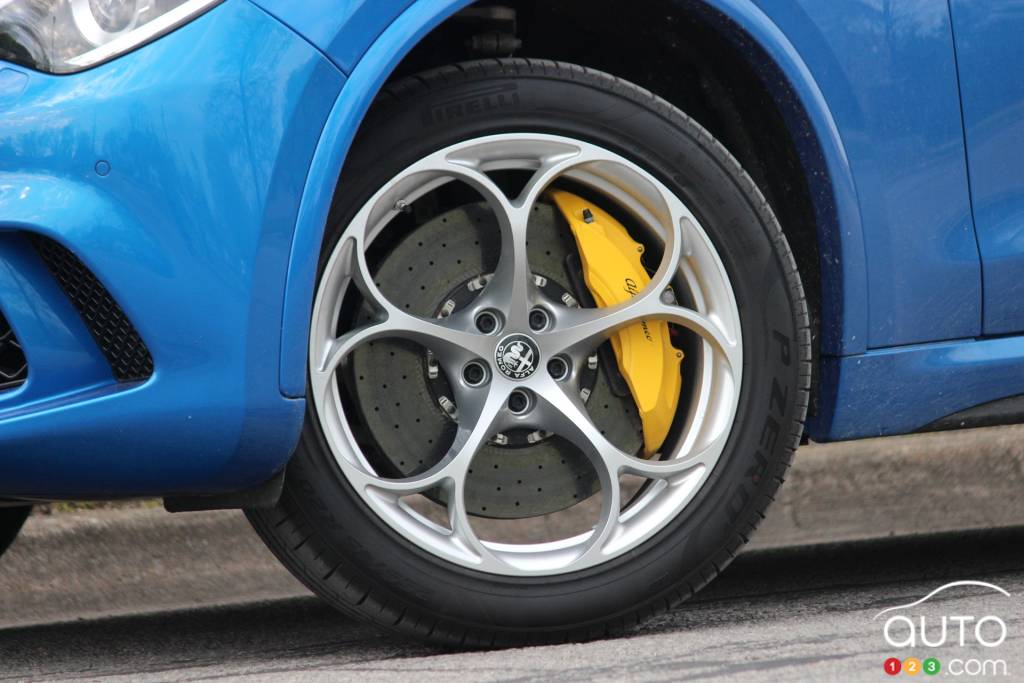 The 2019 Alfa Romeo Stelvio SUV (including the Stelvio Quadrifoglio) remains unchanged on the outside for the new model-year but gets updated with newly-stan...