It’s a phenomenon whose existence has been confirmed by study after study. For many consumers, the idea of switching to EVs is equal part intriguing and anxiety-causing. Kia has done its best to attenuate EV-phobia by producing use-friendly EVs that look and drive like “real” cars, for instance the 2019 Kia Niro EV, the electric powertrain of which is geared for ease of use and of comprehension. This crossover is convivial and winningly respectful of the environment, and it makes the transition to electric vehicles less stressful for EV-phobes. And those studies have shown that’s no small matter if automakers want to lure buyers over to electric vehicles.

Modern and frill-less
In line with this approach, there are few big changes to be found in the EV version of the Niro, which looks for the most part just like the regular version of the model. Among the few esthetic particularities, the most notable is the front grille, here contoured in blue; the back end gets the same touch.

The crossover also gets energy-saving 17-inch wheels fitted with the base version’s Michelin tires, as well as LED headlights and, on the SX Touring version, LED rear lights as well.

Other change that owners will want to be aware of: the outlet for charging is found at the front of the vehicle. And it gets its own LED light so that users can see what they’re doing at night when they want to plug the vehicle in to be charged. 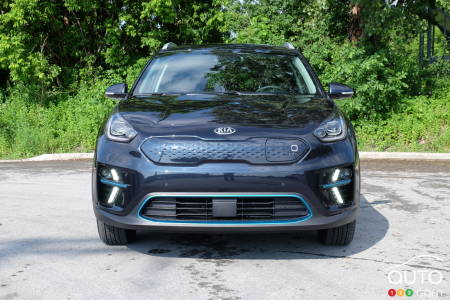 Well-equipped, like a true Kia
As is its wont, Kia has included a generous supply of standard features on the Niro EV, which gets things like heated outside mirrors, turn signals inside the housings of those mirrors and special aerodynamic wiper blades and other non-bargain-basement items.

Getting into the crossover is made easier by the smart key fob with push-button start. Once inside, you’re welcomed by a spacious, modern-looking (though plasticky) interior. There’s not a ton of bling, but the environment is streamlined and well-designed.

The seats are comfortable enough, and covered by cloth upholstery (which turns to leatherette in the EX version and to genuine leather in the SX).

Speaking of which, the 2019 Niro EV comes in EX and EX Premium versions to start, both of which comes very well-equipped out of the box for the category. 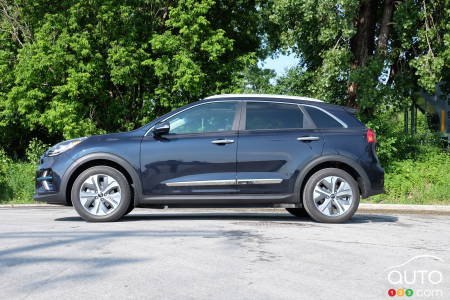 Sitting above them is the SX Touring, which includes a power sunroof, heated steering wheel and front and rear seats (the front ones are also ventilated) and 8-way power-adjustable front-row seats.

Between the front seats is the access point for Kia’ UVO3 interface, modified for this electric version of the Niro. Thankfully, the extra data related to the EV powertrain doesn’t make the system any more complicated to navigate through. It accesses the usual range of functions, including the towing system, geo-localization and a ton more.

The multimedia screen starts out in the EX version as a 7-inch unit, and grows to 8 inches in the SX Touring – which also gets a beefed-up 8-speaker harmon/kardon audio system compared to the EX Touring’s regular 6-speaker system.

You’ll also be glad to know that both Apple CarPlay and Android Auto integration is in place in all versions, as is wireless charging. 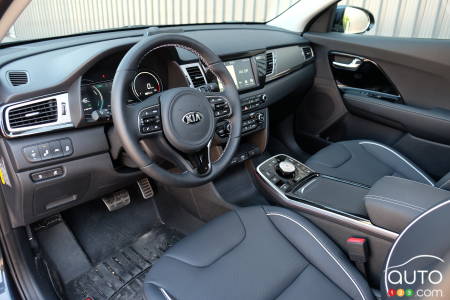 Space and security
In terms of space, the 2019 Kia Niro EV offers a passenger environment roughly similar to what else is available in the small crossover segment, but the cargo space is better than average at 635 litres (back seats up) and 1,789 litres (seats down). Because the battery pack sits under the floor, there is a slight loss of legroom for second-row passengers and if you’re a decent-sized adult you’ll find your knees hovering a little higher than in the non-electric Niro, but it’s not a dramatic difference.

Both the EX and SX versions of the Niro EV get the company’s Drive Wise drive assist package, so you benefit from adaptive cruise control, pedestrian detection, forward collision alert, automatic emergency braking, driver attentiveness alert, lane keep monitor and assist, blind spot monitor and rear transversal traffic alert. Not all of these are givens in the base versions of mass-market models like this, so hast off once again to Kia for going further than others in offering superior drive-assist bang for the buck.

The powertrain
Both versions work with a 356-volt electric motor that delivers a total output of 201 hp and 291 lb-ft of torque. If you peek at the competition, you see that the Niro EV and its 385-km range out paces the Nissan LEAF and sits even with the Chevrolet Bolt. Only the new Kona Electric from Hyundai outdoes it on this front with a slightly better 415 km. 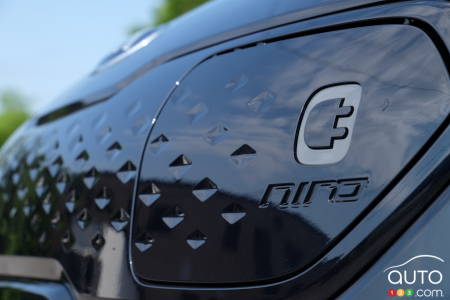 Charging the vehicle’s battery fully on a Level 2 charger takes 9 hours 35 minutes; using a Level 3 allows for getting an 80% charge in one hour when getting 100 kW of power, or another 15 minutes if getting 50 kW.

On the road
I’m starting to know what to expect in terms of the driving experience I’ll get from an EV, and in that sense the Kia Niro EV offers no real surprises. The salient points are gratifying initial acceleration thanks to full torque being available from the get-go, solid, reassuring road handling and little-to-no roll on curves thanks to the low centre of gravity (due to the placement of the battery under the floor), and steering that’s sharp and precise without being particularly sporty. This is near to the very definition of a vehicle made for mainly urban driving.

Four drive modes are available to tweak the performance of the Niro EV: Eco, Eco+, Normal and Sport. Obviously, the first two allow you to squeeze the most range from the powertrain, but it’s possible to treat yourself to the slightly sportier driving experience of Sport mode without sacrificing much in terms of range. It’ll be up to individual drivers to pick their favoured setting, but in general you can assume Eco to be the go-to choice when on the highway, and Sport on country roads or in the city. 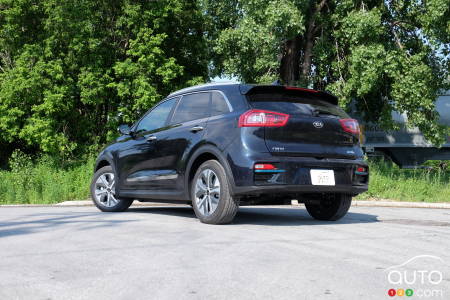 I found, for example, that Sport mode provided a little added does of power, though not to the point of making the Niro athletic. The other drive modes actually limit torque to minimize the wheels spinning or slipping. More specifically, Eco+ focuses on energy efficiency by changing the level of the regenerative braking and the intensity of the climate control system.

I was impressed by the transitions between the regenerative braking and the mechanical brakes which were smooth and gentle. In any case, I generally gravitate to one-pedal driving, which is easy and intuitive after initially being counter-intuitive. Be a little patient and it will come to seem second nature. If you’re finding you’re giving yourself whiplash in the process of getting used to it, know that you can also set the level of the regenerative braking to one of four different levels of intensity.

Pricing
Starting price for the 2019 Niro EV EX version is $44,995, which not coincidentally makes the model eligible for the federal government’s new IZEV rebate program. Pricing then climbs to $53,995 for the SX Touring. Kia has thus priced the Niro EV a little higher than the Soul EV, which starts at $42,595, but that’s justified by its greater power out of the box and superior range.

The 2019 Kia Niro EV adds a substantial new element to the Korean automaker’s range of electrified vehicles, and in fact when you consider the 2019 Niro EV/Soul EV tandem Kia now really has to be part of any conversation regarding a potential purchase of an electric crossover. Its range places it in the head peloton of the category and it’s eligible for the fed’s rebate, so mission accomplished there, but the Niro EV is also versatile, spacious and well-equipped – plus it’s quite a nimble performer on the road. 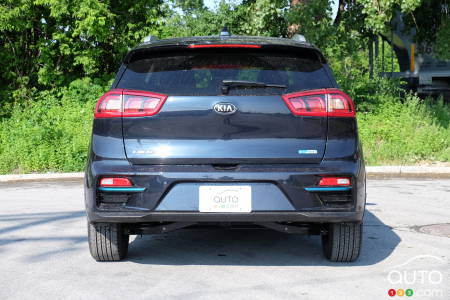 If you’re shopping for something extravagant, look elsewhere. But look here especially if you’re an EV neophyte and you currently suffer from EV-phobia; this vehicle could be the cure for what ails you.

-    Not much whiff of luxury anywhere, instead there’s lots of plastic
-    The suspension is a bit rudimentary at times 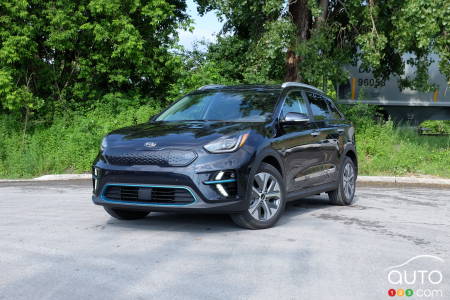 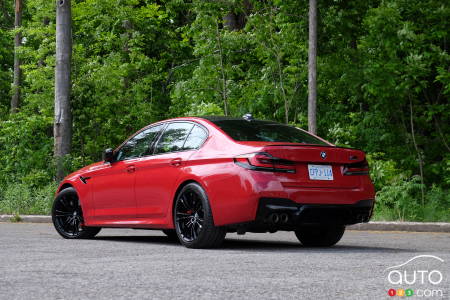