Whistler, BC - Since it arrived on the market in 2012 as a 2013 model, the CX-5 has installed itself as a star player on the Mazda roster. In any given month it’s often as not Mazda’s best-selling model in Canada (in a cat-and-mouse contest with the automaker’s other juggernaut, the Mazda3).

It’s little surprise then to see the company pull out many if not all of the stops for one of its franchise players.

Back in May 2017, I was actually on hand in San Diego, California, for the official launch of the second-generation CX-5. Less than two years later, I was in Whistler, B.C. to try out a new addition to the model lineup, the Signature edition.

How important is the CX-5? A number of American journalists made the trek up to this ski mecca to check out the newest model. To put it in context, of course, keep in mind that this new model is part of Mazda’s plan to introduce a high-end Signature edition for each of its models.

Think of the Signature this way: you always order a piece of chocolate cake in your favourite restaurant, except that now you can get it with extra dark chocolate sauce on top. It enhances the taste… and also the price. 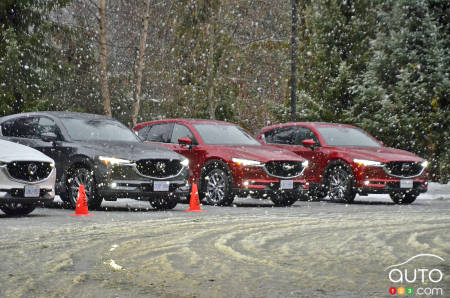 The first reason for the existence of this version, then, is economic. A well-dressed CX-5 is more profitable to its maker than a stripped-down base model. But to be fair, Mazda also went far beyond adding some bits of bling here and there so they could jack up the price of the CX-5. The adjustments made to the model are substantial, and most importantly Mazda has given the SUV a more muscular mechanical setup, which many have been clamouring for since its very first appearance in 2012.

So here’s what you need to know about the new 2019 Mazda Signature edition.

More generous product offering
For 2019 the CX-5 will continue to be offered in GS, GX and GT trims. New this year is the Signature variant, along with some changes that span the whole line of trims. Heated seats, for example, are now standard right from the base model, and ventilated seats as well as retractable side mirrors come as of the GT trim.

Clearly, though, the Signature is the notable addition for Mazda’s popular SUV model for 2019.

The new version comes with the full suite of safety and connectivity systems, including, at last, Apple CarPlay and Android Auto compatibility. On that subject, the company acknowledged that this has been a pressing demand on the part of consumers. It explained the delay in adopting the technology by saying that Mazda’s multimedia system (based on screens that were not touch-operated) had needed to be adapted. 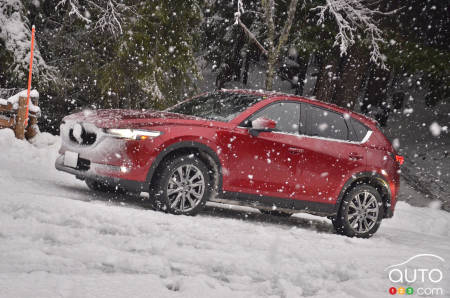 Also distinctive are the dials facing the drivers; these digital indicators get a new, more streamlined look.

The overall intent is to make a convincing case to occupants that they are sitting in a luxury vehicle. In a weird way, though, this creates a neural disconnect with what the senses are telling us about the refined interior, and the logo on the steering wheel. More on that in a bit. 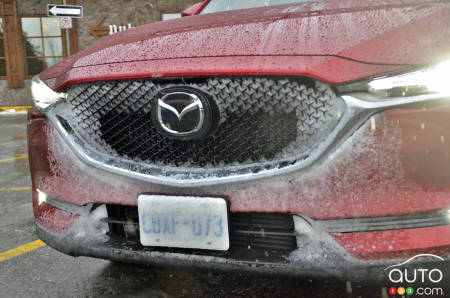 The long-awaited engine
The CX-5 has always run on powertrains that were adequate but never rose to the level of outstanding. That changes now that Mazda has taken the Mazda6’s 2.5L 4-cylinder turbo and installed it under the hood here. Maximum output of the new powertrain is 250 hp and 310 lb-ft of torque.

I stress the word “maximum” there. At the launch event Mazda explains that the top-end performance of this engine could vary depending on the type of gasoline fed into the tank. So this, if you want to save a few bucks and put in 87-octane gas, you can but you’ll get only 227 hp out of the engine. At the other end, 93-octane gives you 250 horses. Choose an in-between rating, and you get output that’s… you guessed it, in between.

For those wondering which one is recommended, Dave Coleman, head engineer at Mazda, explained that it depends on the driver’s preferences. “If an individual is happy with the way their CX-5 is performing with 87-octane gas, why spend more?” 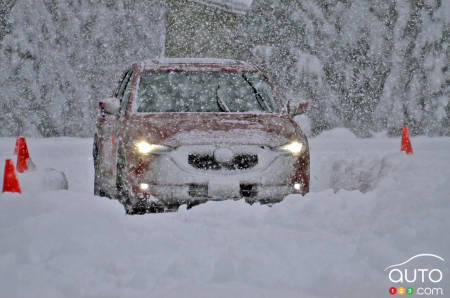 Revised suspension
A brief word is in order regarding the changes Mazda made to the suspension elements. The company used the opportunity of this model overhaul to modify the geometry in order to reduce body roll when cornering. The function also works on the braking of the outside front wheel, helping improve fluidity.

This may appear to be a minor adjustment, but it’s one of those elements that earns the CX-5 high marks among those who drive it for a length of time. Its connection to the road surface is solid and exceptional. 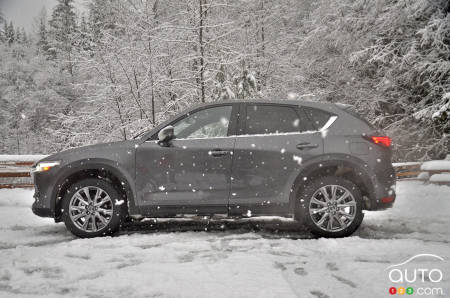 Added value
Once we were finally able to drive the new CX-5 Signature, we were impressed both by its updated suspension and by the increased power available from the mechanics. But really, it would have inconceivable for the manufacturer to deliver a revised new high-end version of its popular SUV and give it the same old anemic engine.

That 2.5L 4-cylinder will also be placed in the GT version, giving that trim added value as well. Speaking of which, buyers will need to fork over at least $37,540 for the GT with this new engine without a turbocharger, and another $2,000 to get the turbo. As for the Signature version, it starts at $40,950. Take note that the price of the base CX-5 with front-wheel drive is $27,850 and $29,850 when equipped with AWD.

Add to those numbers the $1,895 in transportation and prep that applies to the CX-5. Yes, in Canada, we’re still getting rolled when it comes to these fees. 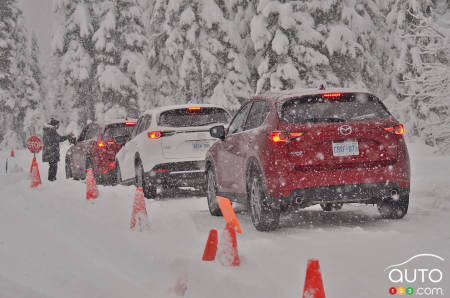 Conclusion
Now, we get down to the crux of the matter:  is all this extra extraness worth the extra cost?

My instinct is to answer that by saying that if you’re already considering the GT trim as an viable option, then the Signature edition is worth it. The price exacted corresponds to the extra value you get in the form of more equipment and refinement. Then, the appropriate comparison to make is to stack it up against similar offerings from the luxury brands.

Certainly, the gap that separates a gussied-up Mazda CX-5 from an entry-level product from a brand like BMW is much smaller than it would have been a few years.

It falls on you, the consumer, to decide according to your personal preferences. The only additional factor I would submit for consideration is in terms of residual value. This will inevitably be lower for a mass-market brand vehicle, no matter how dressed-up it is.

This promises good things for the Signature edition, and it explains in a nutshell why Mazda has created it. 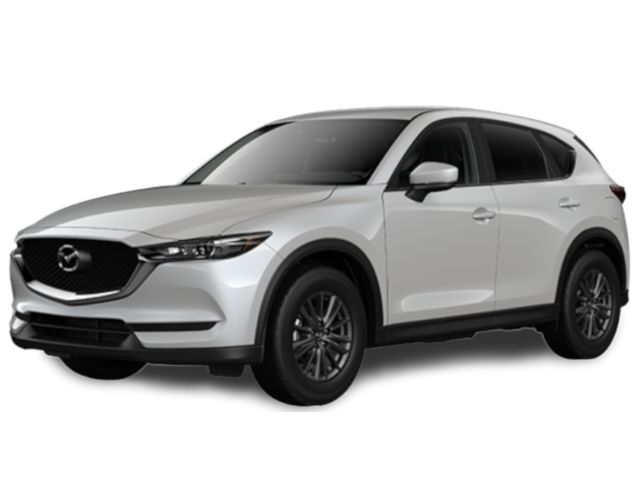 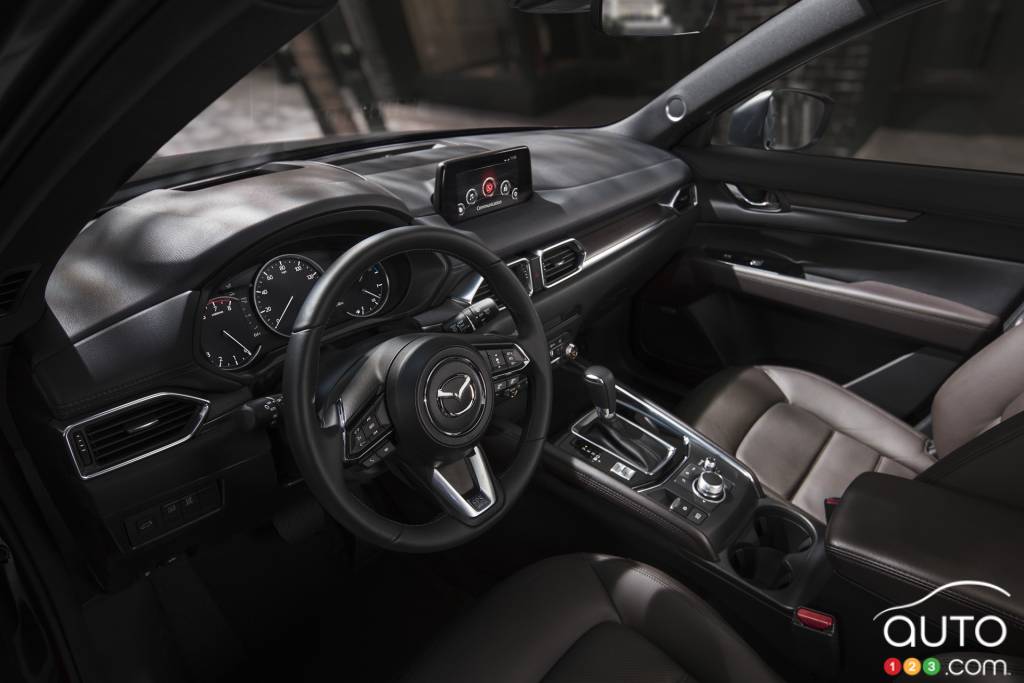 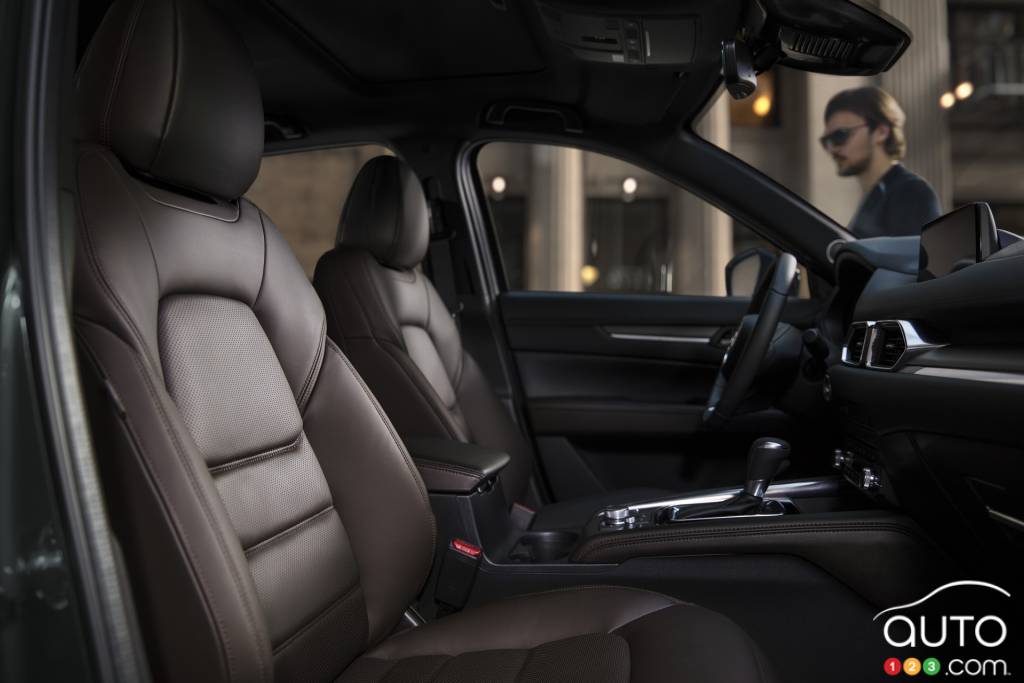 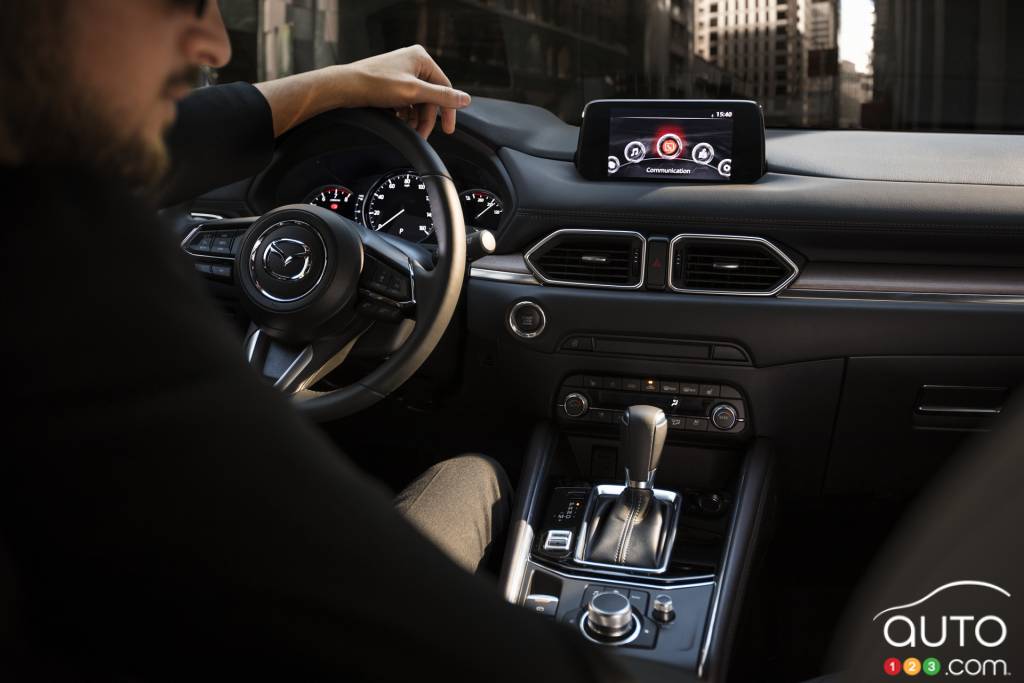 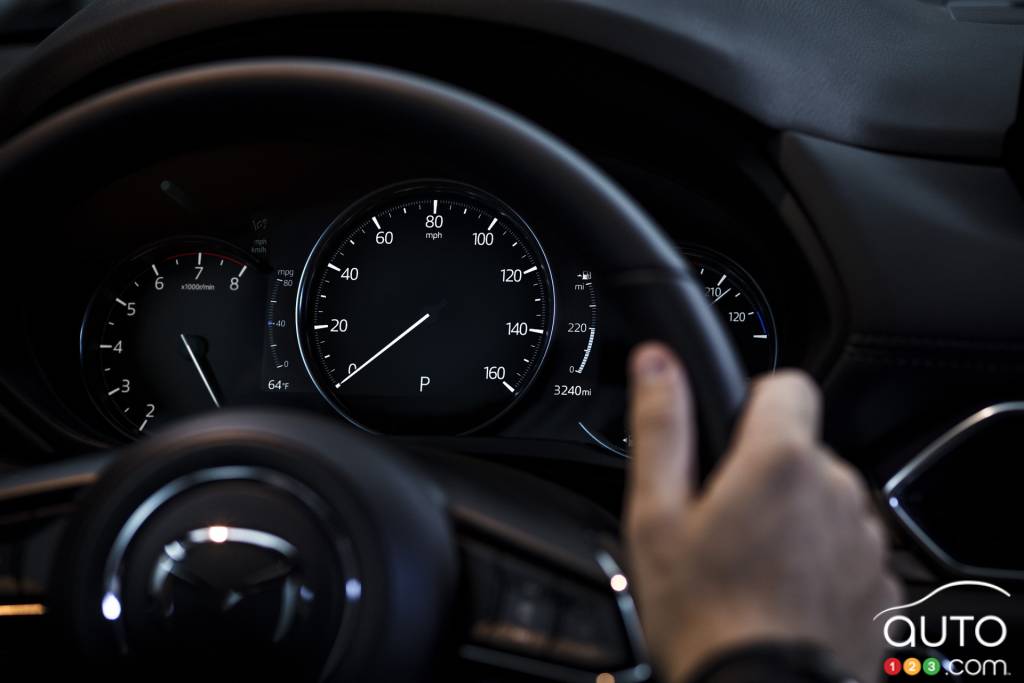 A more powerful turbo for the Mazda CX-5?

Tweaked and refined, the Mazda CX-9 will be available as of September and carry a starting price of $36,700. Mazda Canada has announced details and pricing f...

The Mazda CX-5 SkyActiv-D (2.2D) 2019 is the diesel-powered version of the SUV long promised by the Japanese manufacturer. Diesel enthusiasts will be thrille...