The arrival of the CLS on the market in 2006 constituted a small revolution. Mercedes-Benz was the first car manufacturer at the time to introduce a four-door coupe, and it created a trend with many other carmakers following suit. The unexpected success of the model undoubtedly inspired Volkswagen to produce its CC soon after; then Audi introduced the A7 and even BMW got into it with the 6 Series Gran Coupe.

To celebrate the model’s 15th birthday last year, Mercedes introduced the 3rd generation of the CLS, now with a more subtle approach. Difficult to be daring when you have a core customer to please, which is probably why the new CLS, while retaining its elegance, doesn’t produce as strong a wow effect or grab the imagination quite so firmly. Still, Mercedes-Benz has sold more than 374,000 units since the beginning of the model; it’s an undeniable success. Sharing more than an engine
As with the previous generation, the new CLS shares the majority of its ingredients with the E-Class sedan. The CLS is lower and longer for a stronger presence on the road. The sloping roof is still the main attraction with smaller windows than the E-Class. The model also shows off a more muscular shape, due in part to the large headlights.

Like all Mercedes-Benz products, there is a sober version (the 450) and another, more extroverted edition, the AMG 53. The latter is recognizable by its larger air intakes at the front, two chrome strips and the imposing rear extractor, not to mention the AMG logos in plain view.

Inspired by the S-Class
For its part, the interior flashes a lot of S-Class references. There’s an optional all-digital dashboard, on which the driver can configure the information content to suit their needs and the driving conditions. To fit with their moods and preferences, they can also choose between  three display styles. The Classic and Sport styles have a basic two-tube structure, while the modern style offers a tubular central instrument structure. The CLS goes out of its way to make you feel comfortable. As an option you have what Mercedes-Benz calls Energizing Comfort, a function that links different comfort systems in the vehicle. It makes use of the climate control system (including perfume diffusion), seats (heating, ventilation and massage) and the heated steering wheel and other heated surfaces, as well as lighting and background music, to ensure a well-being specifically adapted to the mood and the needs of the driver.

Thus, in theory, the overall levels of well-being and performance are increased. You have the choice of six programs: Freshness, Warmth, Vitality, Joy (yes, joy), Comfort and three fitness modes. I tried the Joy program during the morning rush hour on the Champlain Bridge coming into Montreal, and oddly, I was not a happier camper for it.

It would take longer than my commute across the St. Lawrence to describe all the advanced equipment on board, so I’ll summarize thusly: everything in the E-Class is also available in the CLS. The ambiance on board varies a bit depending on whether you’re in the 450 or C53 AMG version. In the 450, you have very ergonomic and comfortable seats that mold the body shape with multiple functions including a variety of massage and a dynamic function that swells the bolsters of the seats to keep your torso in place when you enter a curve.

In the 53 AMG, sportier seats offer larger side reinforcements playing the same role. The clarity of the 12.3-inch screens is sublime and gives a futuristic style to the cabin that otherwise bathes in quality leather and noble woods wrapped in a general comfort that commands admiration. You can even choose 70 different colour tones as night mood.

No V8 yet
Under the hood, it's the big return of the inline-6. The CLS 450 debuts with a 3.0L turbo six with 362 hp and 369 lb-ft of torque. Mercedes-Benz is also using, for the first time, a 48-volt electric alternator-starter. Called EQ Boost, this generator inserted between motor and gearbox is powered by a 48-volt battery. Responsible for assisting with start-up, it provides 21 hp and 184 lb-ft of torque while powering the on-board system. You won’t really feel the difference of this new unit while driving the 450 version. It’s more obvious on the CLS 53 AMG, because the system is connected to an electric compressor that virtually eliminates the turbo lag. And while the 53 AMG starts with the same 6-cylinder engine as the 450, output is increased to 429 hp and 384 lb-ft of torque.

In both cases, you’re entitled to an automatic 9-speed transmission that is, if not sporty, flexible and obedient. You're also entitled to the 4MATIC transmission with torque distribution set at 31% up front and 69% at the rear for the 450 version. The AMG version with the 4MATIC+ is a little different, sending up to 100% of the torque to the front or to the back.

Mercedes-Benz puts a lot of emphasis on comfort and excellent handling while driving – keeping mind that the automaker also produces the AMG GT sedan, which is decidedly sportier. It becomes difficult to target a specific market when you have three sedans of the same size on the road. The CLS has the compromise role, offering a good reserve of power without it bubbling over into excess. That said, the 53 AMG is more dynamic and can bring you from a stop to 100 km/h in 4.5 seconds. 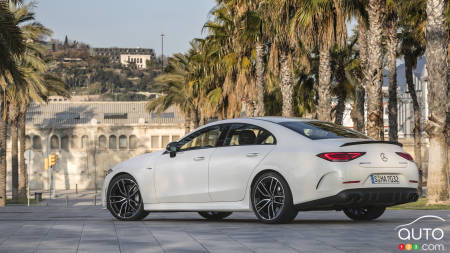 Rock solid
The model can be had with one of two available suspensions: the four-link front suspension and five-link rear suspension are standard. Dubbed Dynamic Body Control, the system is characterized by basic sports settings and includes continuously adjustable damping at the front and rear axles. The selectable drive modes are Comfort, Sport and Sport+.

Available as an option and worth considering is the Air Body Control air suspension that includes an improved adaptive and adjustable damping system. The driver can choose between different vehicle characteristics ranging from comfort-oriented settings to sport settings using the drive mode selector. The controlled damping is associated with a damper that automatically adjusts the height of the body by 15 mm more or less, depending on road conditions and car speed.

Add to this a heap of electronic driving aids, and you’re able to turn this 1,935-kg mass of metal into a ballerina or 100-metre sprinter as you please. You can attack curves without any understeer and the driving aids intervene automatically without any prompting by the driver. Mercedes-Benz has even added the S-Class’ semi-autonomous driving function, which automatically adjusts the speed of the vehicle to the speed limits listed on the road signs and changes lanes simply by activating the turn signals. 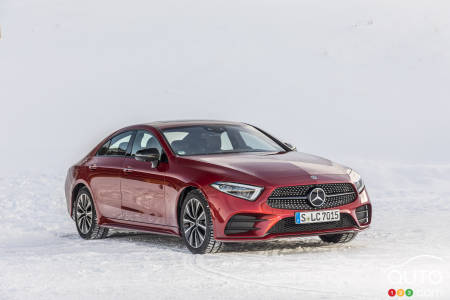 Conclusion
Mercedes-Benz has been forced to review the role played by its mid-size sedans, and it has entrusted the CLS to play the part of compromise choice. On the one hand you have the traditional E-Class and on the other, the faster-paced AMG GT sedan coming soon. The CLS occupies the spot between those bookends.

But the danger with this strategy is that it can split the intended audience. These consumers suddenly find themselves with a lot of choices in a market segment the automaker’s share of which is quite small; could the move threaten the long-term survival of a model whose niche has now become even smaller? 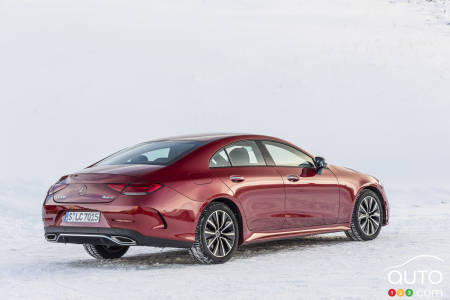 The 2019 Mercedes-AMG CLS 53 4MATIC+ is a four-door-coupe grand tourer that’s long, muscular and high-class. This thing will cost you, but for that you get a...