Toronto, ON – Just freshly arrived in Canada, the new 2019 Porsche Cayenne picks up where the second generation of the mid-size luxury SUV left off. That version of the Cayenne, which debuted in 2011, attracted a vast clientele thanks to its more attractive lines, but also because of the impressive lineup of engines available for it.

I want to the area north of Toronto to see what the new 2019 Cayenne is made of, in this case in its base-model version. For Porsche Canada, this trim accounts for over 50% of sales in this country, so it’s no surprise they wanted to showcase it for the media folks on hand.

Superior in all respects
The Porsche Cayenne 3.0 really throws out the recipe used for the previous model. The Volkswagen Group’s MLB platform, for example, is all-new; it’s stiffer and more modern. The new SUV is also longer, wider and not as tall as before, even as the wheelbase remains the same.

These changes are reflected in the new Cayenne’s exterior shape, which in terms of design doesn’t impress quite as much as did the second generation of the model eight years ago. Remember that the initial edition of the Cayenne has gotten mixed reviews for its unusual design.

In any event, the nose of the Cayenne is new with its more-imposing grille and new light clusters. Seen from the side, the 2019 Cayenne looks much like the outgoing version, with the exception of the more thinly sliced parking lights. It’s when you move on to the rear that the visual signature of recent Porsche models starts to make sense. Namely, that big illuminated horizontal bar is truly superb!

More subtle are the changes to the wheels, which are of different sizes in front and in back. The engineers also widened the track in the back to improve handling on curves.

Lighter overall thanks to an all-aluminum chassis, the 2019 Cayenne comes equipped at base with an all-new 3.0L V6 engine. But this year, it is backed by a turbocharger – bringing the overall output to 335 hp and improving torque to 332 lb-ft.

As before the engine combines with an 8-speed automatic transmission, but this time Porsche went with a ZF unit in place of the old Aisin gearbox. All-wheel drive is still included, as it has been since the introduction of the first Porsche in 2002.

A more refined interior
Unsurprisingly, Porsche has upgraded the interior of the Cayenne to bring the model up to date. The older Cayenne was already pretty impressive in this respect, but it was getting long in the tooth. Now, though the overall vibe is still quite similar to that in the outgoing model, there are several notable improvements.

The dashboard, for one, is now flanked by a large 12.3-inch screen, while the central console has finally said goodbye to its little army of buttons in favour of a solution that is, among other things, easier to clean: touch commands. We’d already seen this change in the recent Panamera, and now the Cayenne gets the same treatment.

Even in the short time I had in the vehicle for this first drive encounter, I found the infotainment system really easy to use, and its reaction time was impressive. And while I didn’t have time to really memorize the positioning of all the commands placed around the gear knob, I had no issues using them, particularly since they are spaced apart adequately.

That gear knob, by the way, is exclusive to the Cayenne; personally I found it to be a little too big. The steering wheel, meanwhile, is pleasant to grip. No surprise, the comfort of the seating and upholstery are a definite strong point of the Cayenne, and the ideal driving position is easily found.

Porsche has increased the total cargo volume behind the rear seats to 770 litres, which increases to 1,710 litres when the three sections of the 40/20/40 split back seats are folded down.

In general, the quality of the materials and of construction is up to the exacting standards set by the previous Cayenne.

A first drive: things go a little south
The first day of our Ontario test session was spent under rainy skies and on a fairly unexciting itinerary. Suffice to say that the Cayenne handles itself fine, despite the high stance of the vehicle. In all road and weather conditions, the vehicle showed its interior to be quiet, its mechanics to be smooth and its steering to be weighty.

On the flip side, the sound of the V6 did nothing to win me over. Even the Sport mode and the electronic adjustments it made to the settings failed to improve the musicality of the engine. As for the transmission, while it performs admirable in normal driving, does display some irregularities when accelerating to pass, and especially when in stop-and-go city traffic. Like a number of Volkswagen, Audi and Porsche products, there’s that delay you have to endure after pressing on the accelerator. That gets annoying over time, especially as the Porsche is conceived to also serve as a family vehicle made for frequent hauling around of kids.

Despite its weight loss, despite its more powerful engine and despite its new transmission, the 2019 Porsche Cayenne is a more sedate vehicle than before. Acceleration is adequate, the braking is as well and even has a healthy bite, and the suspension system holds up well. But what’S lacking is that driving excitement that distinguished previous iterations of the Cayenne.

The last word
The new Cayenne has been significantly upgraded, even if the changes to its appearance are muted. It inspires confidence, comfort is beyond reproach. What’s more, even if the mechanics could do with being more explosive, this big SUV still has no trouble climbing up to the speed limit very rapidly.

The base price for the model has climbed from $69,600 to $75,500 for 2019. The manufacturer justifies the increase by citing the addition of new standard equipment like park assist, LED headlights, larger alloy wheels, keyless entry and so on.

But one fact is inescapable, in my view: this first drive didn’t induce in me much driving excitement. For Canadian consumers looking for a confidence-instilling luxury SUV, the Cayenne base model has to be on the short-list. But if you’re looking for that extra spark, the sportier Cayenne S might be a smarter alternative. It is more expensive, yes, but its 434-hp twin-turbo V6 and the additional ‘S’ adjustments make it a livelier choice. 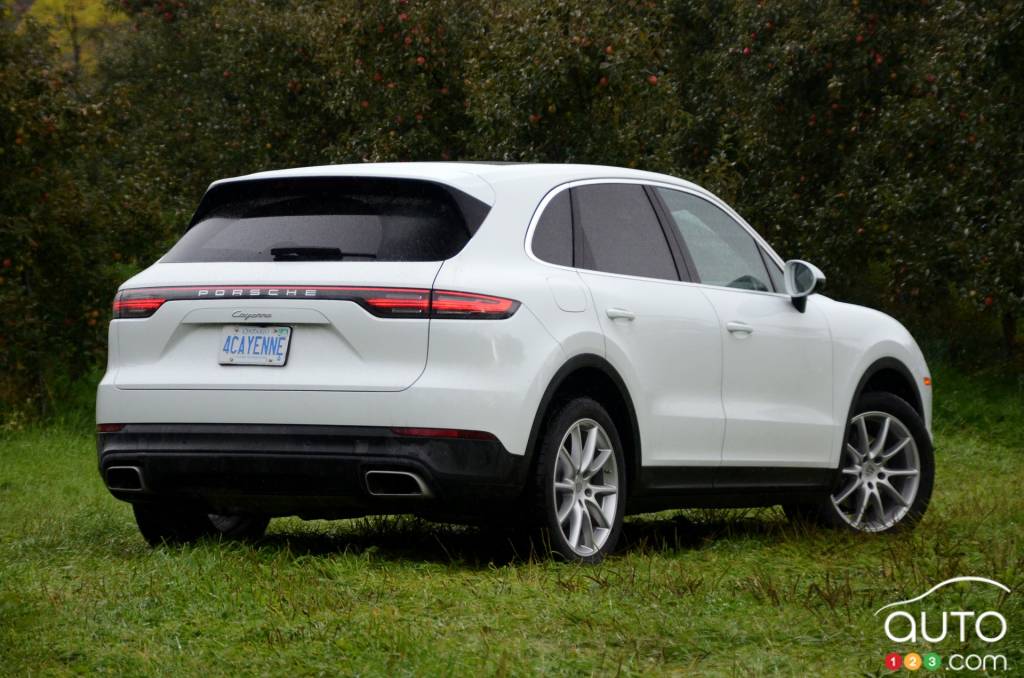 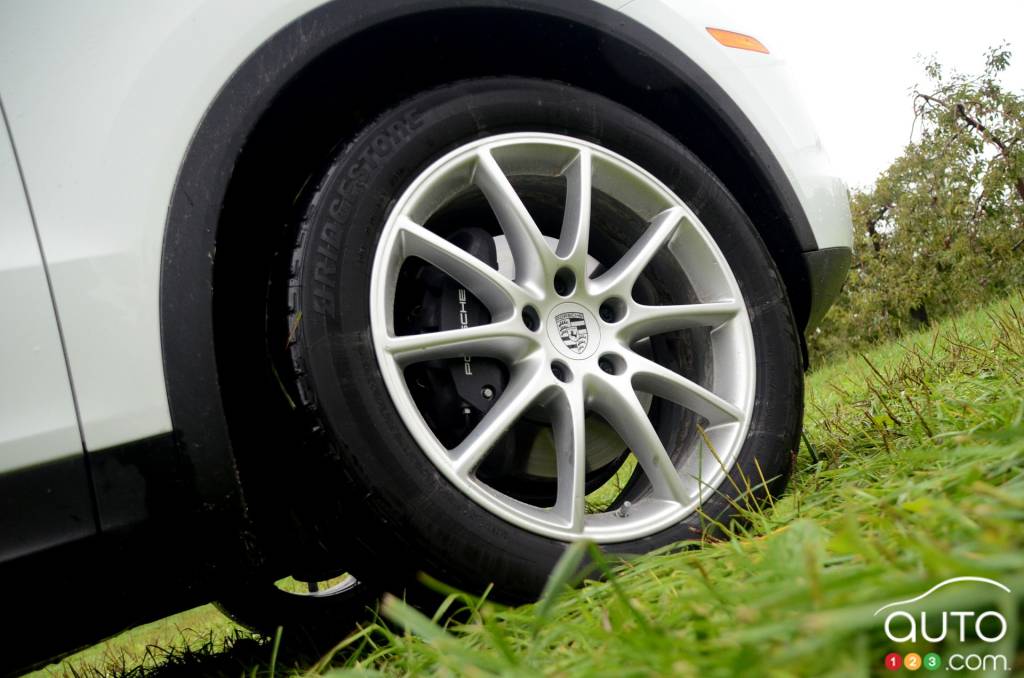 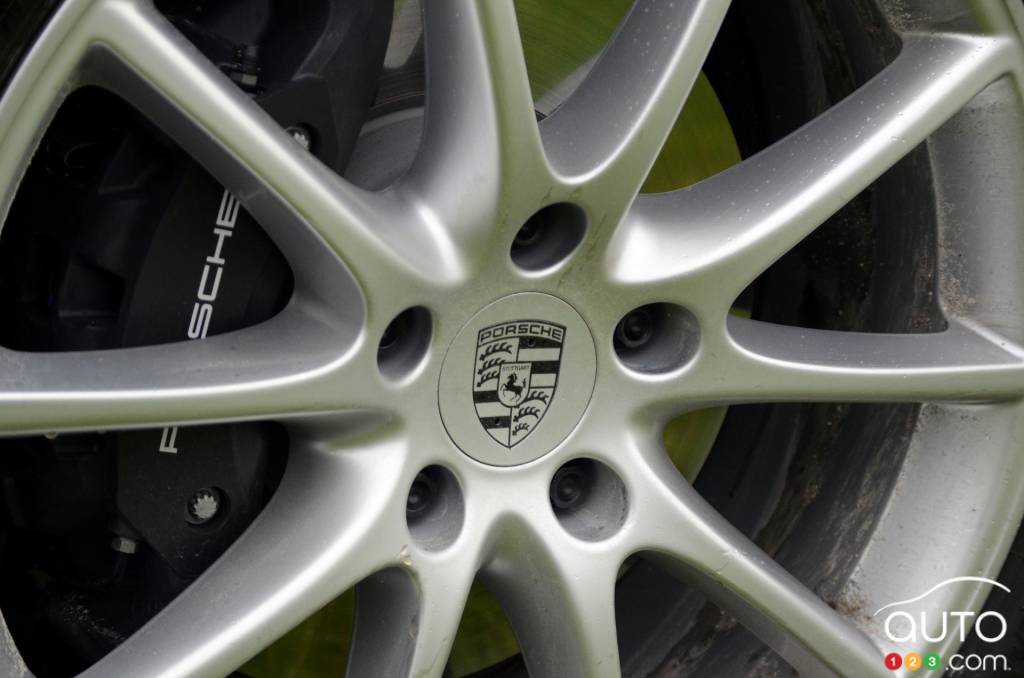 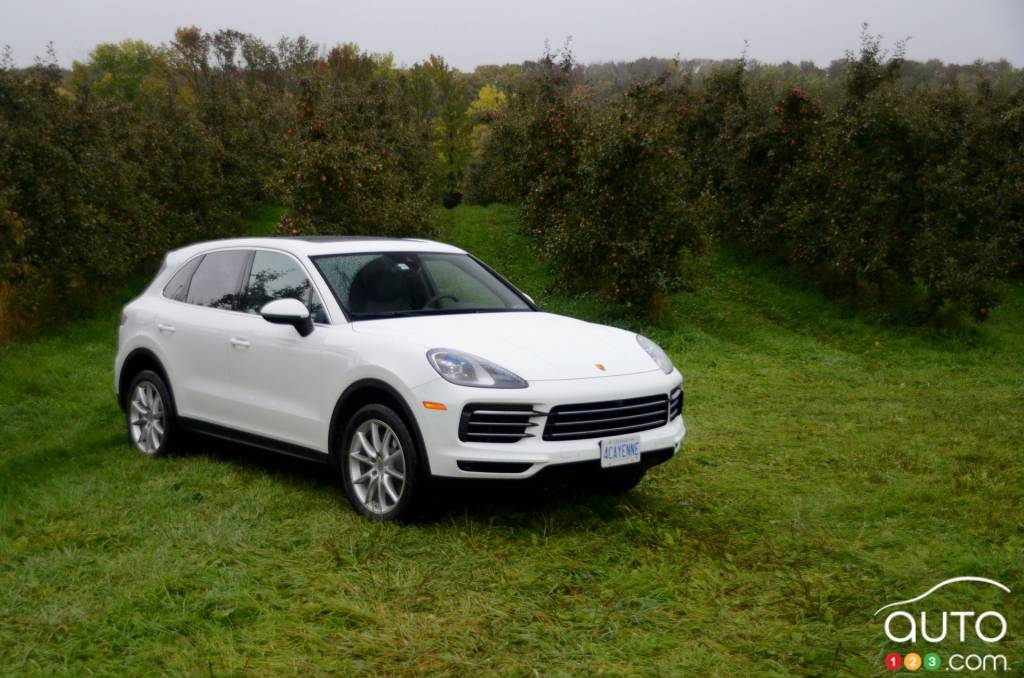 Photos:V.Aubé
Photos of the 2019 Porsche Cayenne
See the complete Gallery