County Kerry, Ireland - The second generation of the Q7 dating from 2016, Audi decided it was time for a makeover for its mid-size SUV. The company hasn’t done things halfway either: the 2020 Audi Q7 is a very different-looking beast than before.

A look revisited
The overall dimensions of the utility model stay the same, save for an 11-mm increase in total length. If you can discern that kind of change, well you’re a mutant. Fortunately, the designers at Audi found other ways to help distinguish the new Q7 from the old. And it starts with the front grille.

While the 2019 edition adopted a six-sided shape enveloping seven horizontal chromed strips, the 2020 version is now octagonal, with six bars running inside it vertically. Which helps the thing look less like a cheese grater. What is still a big mouth is flanked down low by more–radical air intakes, while higher up space is given over to laser headlights, also become more aggressive thanks to their narrow shape and their visual signature accentuated by chevron-style LEDs aligned like a bit of eyeshadow. 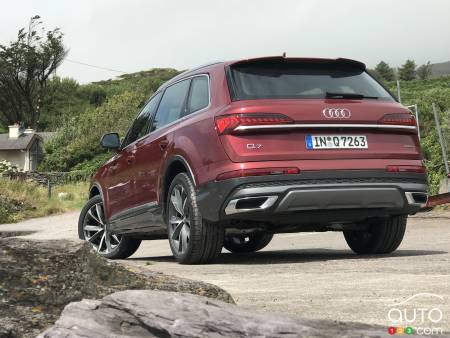 The back hasn’t been neglected for all that, with a silver strip running across the width of the vehicle that serves nicely to underline the imposing girth of the Q7. Meanwhile the lights also get diodes that are highly visible at a stop and get even more interesting when they engage in a sequence for a miniature light show.

Generally, the makeover given the 2020 Q7 has the effect of endowing it with a certain sportiness that eluded its predecessor. Audi has evidently chosen to transform the model’s people-moving-pachyderm image into something more athletic, something more consciously akin to the Q8.

A thoroughly modern interior
Inside you find more elements that show how the designers took cues from the “coupe” concept of that Q8, to the point where the presentation is quasi-identical. While the old Q7’s cabin mimicked the horizontal leanings of its front grille, with the screen deposited on the top of the dashboard as if it had occurred to someone very late in the design process that maybe the vehicle should have one, the 2020 version’s cabin gravitates around the screen – nay, three screens! 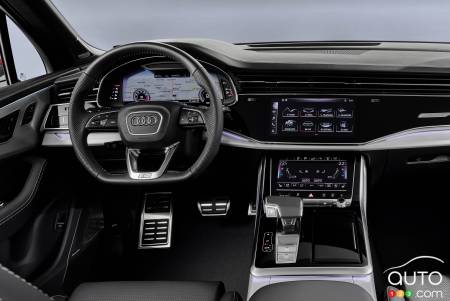 One of those screen sits behind the steering wheel and groups together the digital dials, with the display being adjustable. The other two sit one on top of the other in dead centre of the central console. When they’re not lit up, they actually just look like one big screen, but fire them up and you see that the lower one takes care of climate control and the top one accesses entertainment functions and navigation.

A gander at the imposing central console that serves as a base for the massive gear selector begs an immediate question: where is the MMI wheel?

And the answer is, it’s gone! The folks at Audi confirmed to us that the decision to axe the Multi-Media Interface wheel that Audi owners had gotten used to using to roam around the vehicle’s various menus was a difficult one, and that made for some lively internal debate. After all, the company had been pretty innovative in devising this type of control, and just as users were getting habituated to it, it takes it away! Be that as it may, it was a successful and worthwhile innovation in my book.

What removing that big lug does do, mind you, is declutter the space. The luxury carmakers will be loath to admit it, but Tesla’s success in streamlining its vehicle interiors is having an influence. The dashboard of the new Q7 is more than just a big screen, but it’s edging closer to being that. And to help you manoeuvre through all the functions, Audi proposes a bouquet of touch, haptic and voice commands, plus you can pair up with Amazon’s Alexa system. The Q7 retains a main character trait of being able to accommodate up to 7 occupants, that is when you check off the option for the two folding seats hidden in the rear cargo section. For our initial drive of the model through parts of Germany and then beautiful-but-rainy County Kerry, in Ireland, Audi chose not to supply us with a seven-seat configuration, but it’s safe to assume that those two extra seats will be suitable only for nimble and especially pint-sized children.

With the second-row seats in upright position, cargo space in back amounts to 865 litres. Fold those seats down and you get 2,050 litres – or 25 fewer than the previous edition of the Q7. This is due to a bigger subwoofer lodged in the back.

The ruggedness of Ireland
During our two-country introduction to the SUV, Audi made available to us three engine configurations, all based on a 3.0L working with an 8-speed Tiptronic transmission. Two engines ran on diesel, and these won’t make their way to North America. The third was the Q8’s 340-hp TFSI gasoline engine, which has turned in its compressor for a turbocharger.

Strangely, no one so much as breathed a word about the 2.0L 4-cylinder engine that makes 248 hp. Yet a simple check of the website of any Audi dealer in Canada shows that this is the base engine for the model. 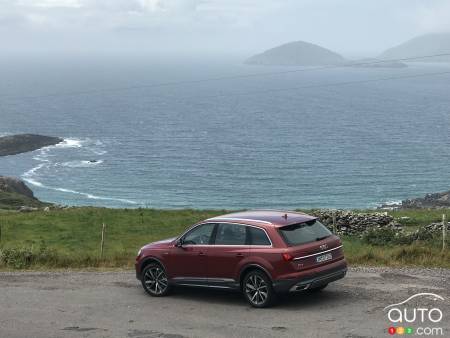 In any event, the new Q7 comes with a 48-volt battery that brings a light form of electrification to the model. This is an increasingly popular choice for luxury vehicles, because the old 12-volt systems are just not strong enough anymore to handle the needs of modern vehicles. By supporting the gas engine with an additional electric motor, you give an extra nudge to the accelerations, smooth out the stop-start function, recover energy from braking and reduce fuel consumption – the latter to the tune of 0.7 km/100 km in the case of the Q7

The air suspension system can be had in a sportier version, and it was this one I got to try out on the Ring of Kerry, a 179-km circular route in the southwest of Ireland. The drive was on the left side of the road but the potholes that marked the road surfaces were just like back home, and generally our SUV floated over them with the easy grace of a ballerina.

The suspension height gets a play of 90 mm, or 50 mm up high and 40 mm lower down. Yet another option (one of about a gazillion, it seems like) allows for the rear wheels to be directional, turning by a few degrees in the opposite direction of the front ones to make parking manoeuvres easier, or in the same direction for better cornering. 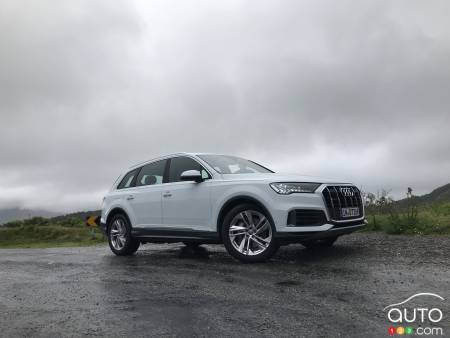 Reassurance through precision
When you furthermore engage the Sport mode of the Drive select system, you quickly appreciate the surgical precision of the steering, which promptly obeys the slightest command on the wheel (which I should add is very pleasant to grasp). The shocks do their job by smoothing out the craters without sacrificing on road grip, helped in good part by the Quattro all-wheel-drive system.

Switch to a more comfort-oriented drive mode, and you gain in ride smoothness but at the expense of that valuable feeling of control, valuable especially on roads that are sometimes so narrow it’s a crapshoot whether the side-view mirror will survive an encounter with a vehicle going the other way.

To this highly evolved interplay between man and machine, you can add an improved turning ratio. To turn from one end of the wheels’ radius to the other takes only 2.4 turns of the wheel, compared to 2.9 in the outgoing model. 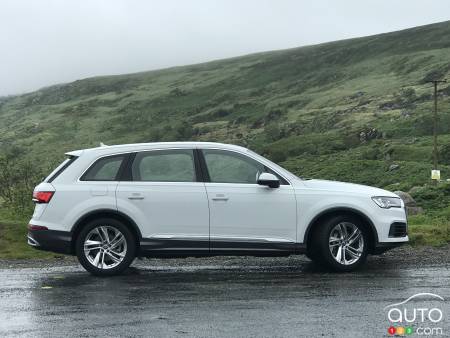 Lastly, that the Q7 also reveals itself to be more stable in general is thanks to the presence of that 48-volt battery. This multi-tasker, in addition to providing the aforementioned support, continually corrects the trim of the vehicle via electrical impulses. This is not to mention the thirty or so drive-assist systems fed by 22 sensors!

Conclusion
For its new and revised Q7 Audi cleverly took the right elements from the Q8 to make it more attractive and more modern, all while improving on its on-road behaviour. The 2020 Audi Q7 will be in Canada in the first quarter of next year. While the 2019 model carries a starting price of $66,300, the cost of the new edition is not yet known; it will be announced as the launch date approaches. The price grid will respect the usual gradations (Komfort, Progressiv and Technik), keeping in mind that at some point down the road there will be hybrid and plug-in hybrid versions made available as well. 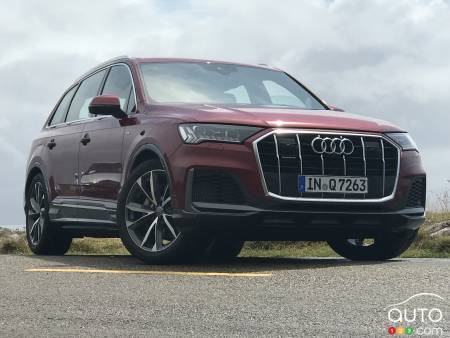 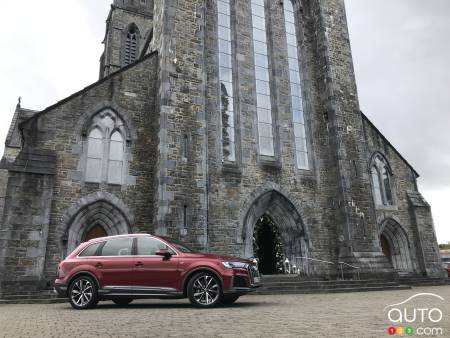 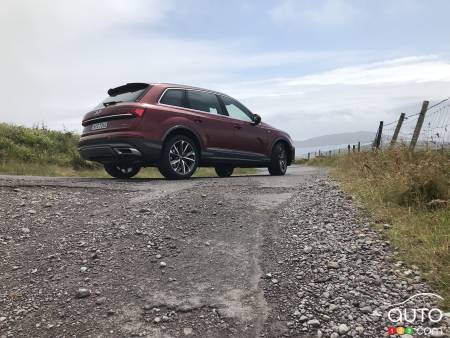 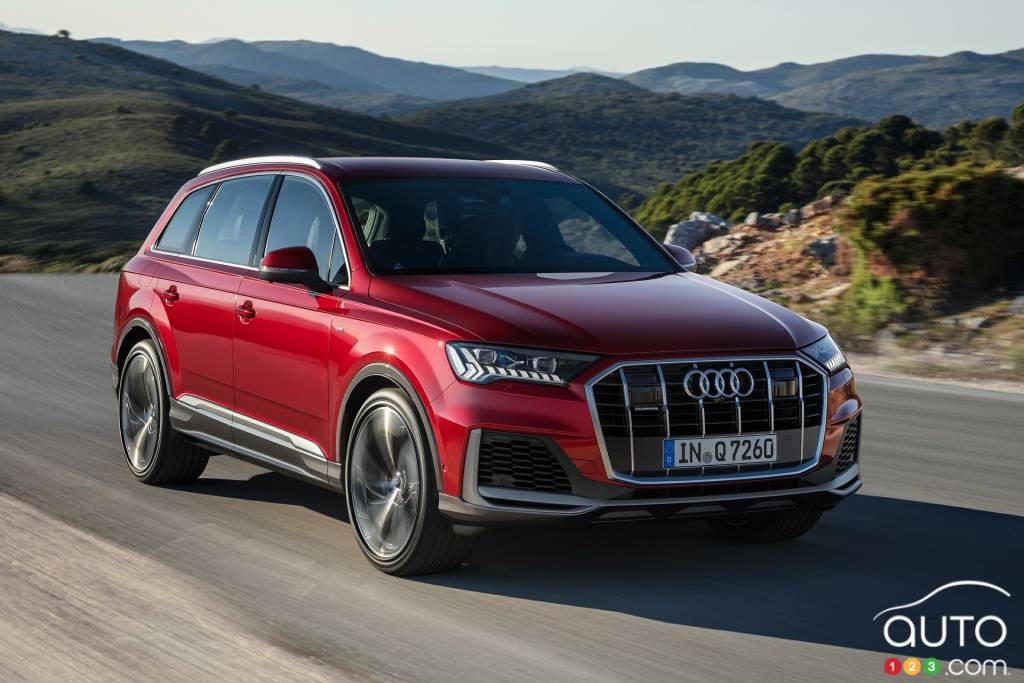 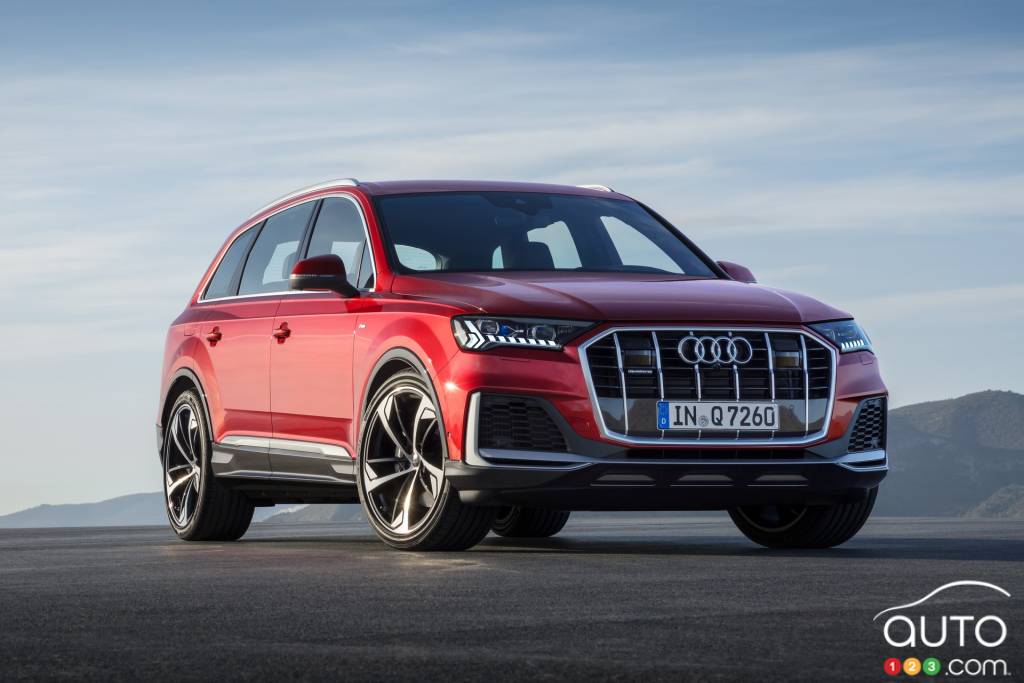 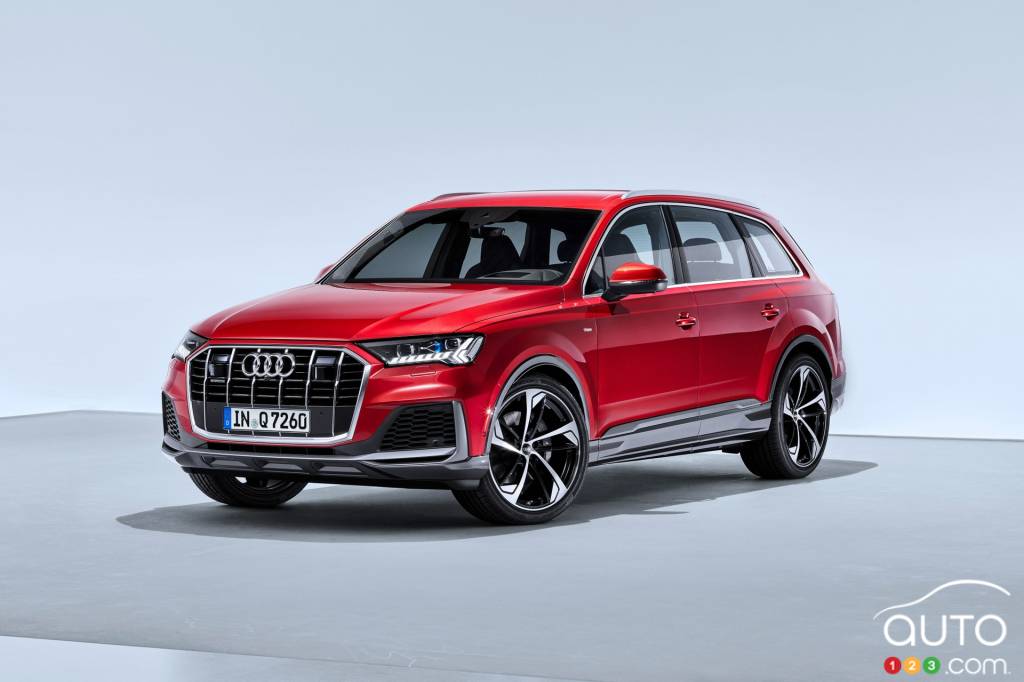 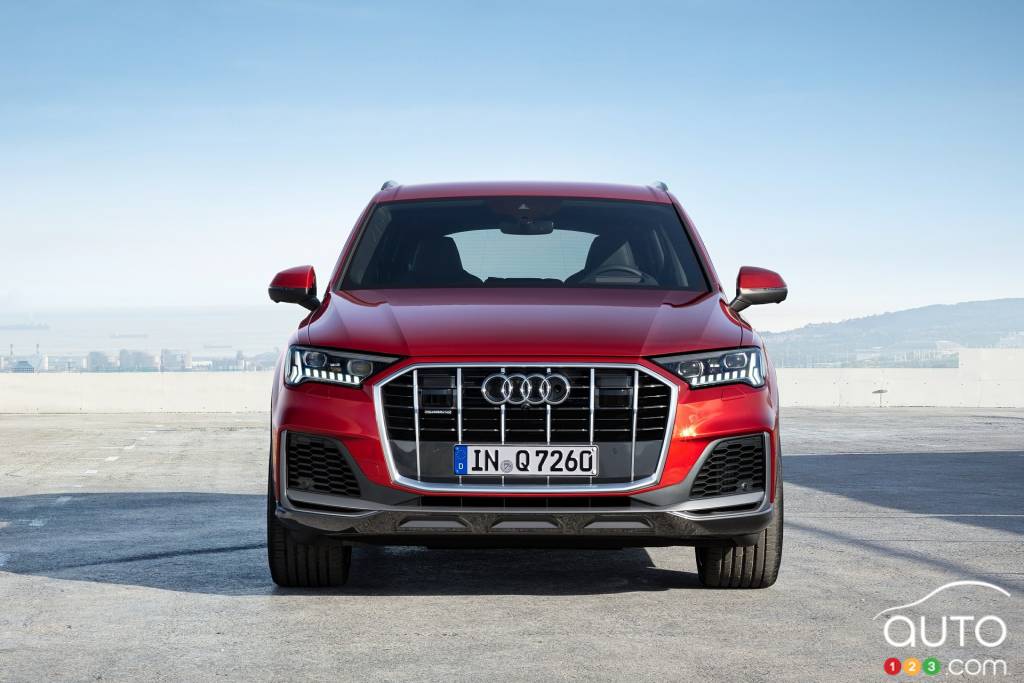 Audi has given its Q7 SUV a refresh for 2020, notably giving the front end a visual update. Another significant change is the addition of a light-hybrid vers...