The 2020 Audi Q7 gets a refresh for its fifth year on the market since the big overhaul in 2016. Most of the big visual updates are centered on the front end of the model, with an eye to bringing it into line with other of the German brand’s recent products.

The larger front grille gives the Q7 a more modern appearance, as do the redesigned LED headlights and the slim back lights that sit above a chrome strip spanning the width of the vehicle. Each of the changeas is a small one, but together they’re substantial enough that it’s easy to tell a 2020 from a 2019 Q7. 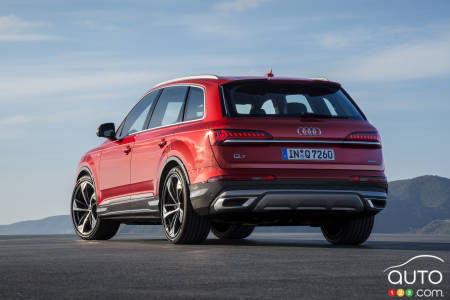 Inside the changes are more substantive. The new dashboard does a better job of incorporating the model’s two touchscreens. The floating screen that sat atop the central console is no more. In terms of connectivity, the automaker’s MMI system is back, is Auto Connect that gives access to road traffic issues and to plug in to systems like Amazon Alexa. In addition, communication with city infrastructures allowing for real-time traffic-light updates will be possible in the next few months and years, at least for cities so equipped. When the model launches in Europe, the product offering there will include two diesel engines, followed a gasoline engine. Interestingly, all of those will work in tandem with a 48-volt light-hybrid system. For the moment, Audi has not divulged any details regarding the changes in output and energy efficiency the addition of this system will entail.

Even more interestingly, a plug-in hybrid version is in the works and should hit the market later.

The 2020 Audi Q7 will debut officially closer to autumn of this year, likely in mid-September. We’ll have more details and pricing for you then. 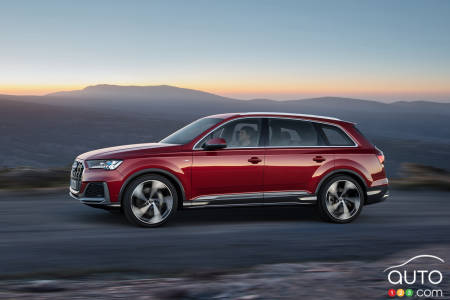