Detroit, MI - Just when you think (again) that we have enough SUVs on the market, here comes Cadillac with yet another one. Clearly the frenzy is not over and Cadillac, with already the XT4, XT5 and Escalade on its roster, has found another niche to slide a model, this new one between the XT5 and Escalade: a medium-large SUV that will accommodate 7 or 8 passengers.

Too big for Europe, the XT6 will make its first appearance in Canada and the United States this fall and then attack the Chinese market, which generally loves big lugs like this. GM first unveiled the vehicle at the Detroit Auto Show earlier this year.

Typically Cadillac
The vehicle’s shape ties in neatly with the latest models from the brand, and the styling is recognizable by its modernity. The SUV is about 20 cm longer than the XT5 to accommodate that third row of seats. The chassis is actually shared with the Chevrolet Traverse and Buick Enclave, but it’s shorter than the latter with a format closer to the GMC Acadia.

The styling is all about finesse, the model benefiting from a slender silhouette accentuated by the piercing stare of the headlights. At the same  time, the rather imposing width of the vehicle adds to its confident presence of the road. Standard wheels are 20-inch, but larger 21-inch wheels are available. 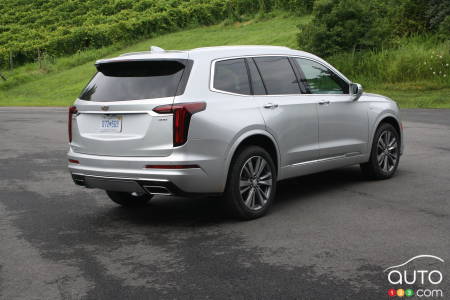 At the rear, you’ll recognize a Cadillac family trait with those vertically inverted L-shaped lights. A functional fin is placed at the back and has a dual purpose. First off, it improves the aerodynamics and secondly it houses the windshield wiper and washer of the rear window, as well as the optional rearview camera and its cleaning solution. These are cleverly concealed under the trailing edge of the fin, for a cleaner, neater appearance and a clear rear view.

A hydrophobic coating on the lens of the XT6's rearview camera helps resist mud, snow and stains, a nice feature to have when Mother Nature’s in a foul mood.

Luxury, American-style
Inside, Cadillac offers a 7- or 8-passenger configuration (second-row captain’s chairs being the difference). Even though Cadillac has demonstrated design chops in the layout and materials used, the overall result is not particularly impressive and does not live up to the standards of models like the German trio composed of the Audi Q7, BMW X5 and GLE from Mercedes. The wood and carbon-fibre trim frankly looks cheap. You have English stitching visible throughout the cabin, but they’re machine-made and these days you have the same kind of detail in a Kia or Hyundai for $20,000 less. You have perforated leather on the standard ventilated front seats, but attention to detail isn’t what it could be.

Moreover, the Cadillac representative who presented the vehicle to journalists specifically said that the XT6 was aimed at buyers not looking for a German SUV - which says a lot. 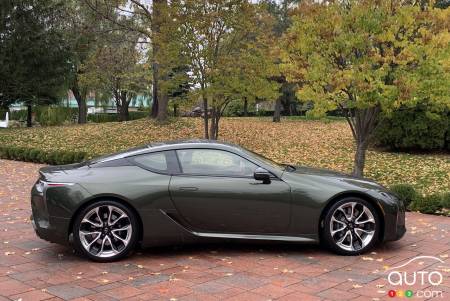 In terms of tech content, the XT6 features a touchscreen infotainment system with Apple CarPlay, Android Auto and integrated Wi-Fi hot spot with wireless charging for smartphones. A host of driver-assistance features are on the menu: automatic emergency braking, lane keeping assist, and blind spot monitoring. You also have an optional peripheral vision camera system that provides an aerial view of the vehicle, making maneuvers and obstacles easier to perform.

The rear-view mirror has a rear-view camera available as an option to eliminate obstacles that could obscure the view provided by a conventional rear-view mirror, such as passengers, head rests or the vehicle's own structure. You also get an optional night vision system that provides the driver with an infrared image of the illuminated area beyond the headlights for better detecting pedestrians and large animals. The system sends additional alerts if the XT6 approaches an identified pedestrian too quickly, potentially giving drivers more time to respond.

All these technologies are fine and good, but the level of sophistication is not up to the level of the model’s erstwhile German competitors. 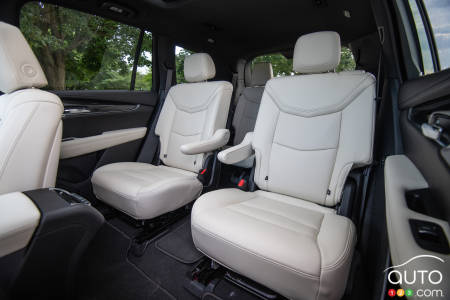 One V6 engine
It’s not just the platform the XT6 shares with family members; the engine, a 3.6L V6 making 310 hp, is also shared with the Buick Enclave and Chevrolet Traverse. In Canada, only all-wheel drive will be on the menu, while our neighbors to the south will have the choice of FWD or AWD. In both cases, the 9-speed automatic transmission is standard.

The XT6 range is composed of two versions: Premium Luxury and Sport. The first is more comfort-oriented, while the second offers performance-enhancing options, such as a torque-vectoring rear axle and sharper-feeling steering wheel.

Nothing special
What’s most bothersome here with the XT6 is that there’s nothing special about it in terms of the mechanics. Ford for example developed for the Continental a 3.0L turbocharged engine with 400 hp unique to Lincoln products before spreading it to Ford models, but the engine of the XT6 is the same as the Chevrolet Traverse’s. The driving is quiet and honest, but again nothing special. Cadillac confirms it will add the Super Cruise, the brand’s semi-autonomous driving system, next year but in its launch version, the technological content does little to really impress.

Conclusion
We usually expect more from a Cadillac product and that's what's missing with the XT6. Quite simply, the wow factor is absent. Meanwhile the base price is over $60,000 and climbs up to $75,000 for a well-equipped model, and you will not get anything special at this price. It's not a bad vehicle, we just expected more from Cadillac. 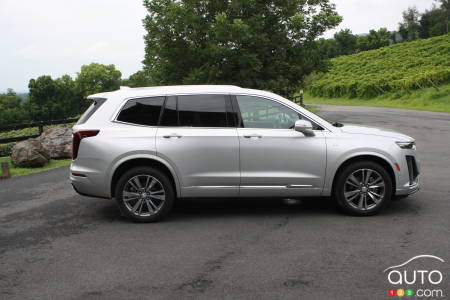 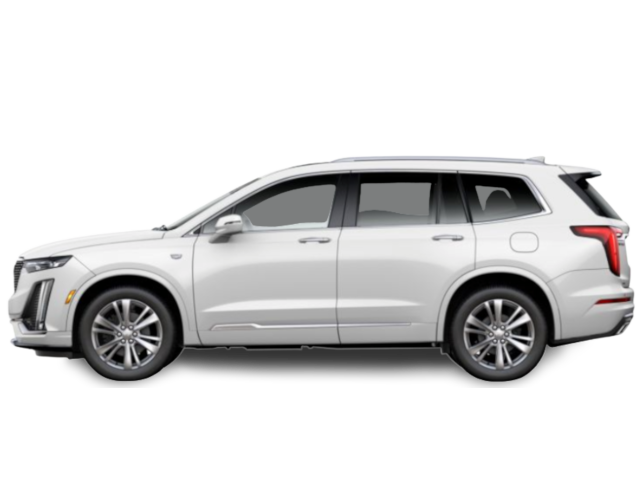 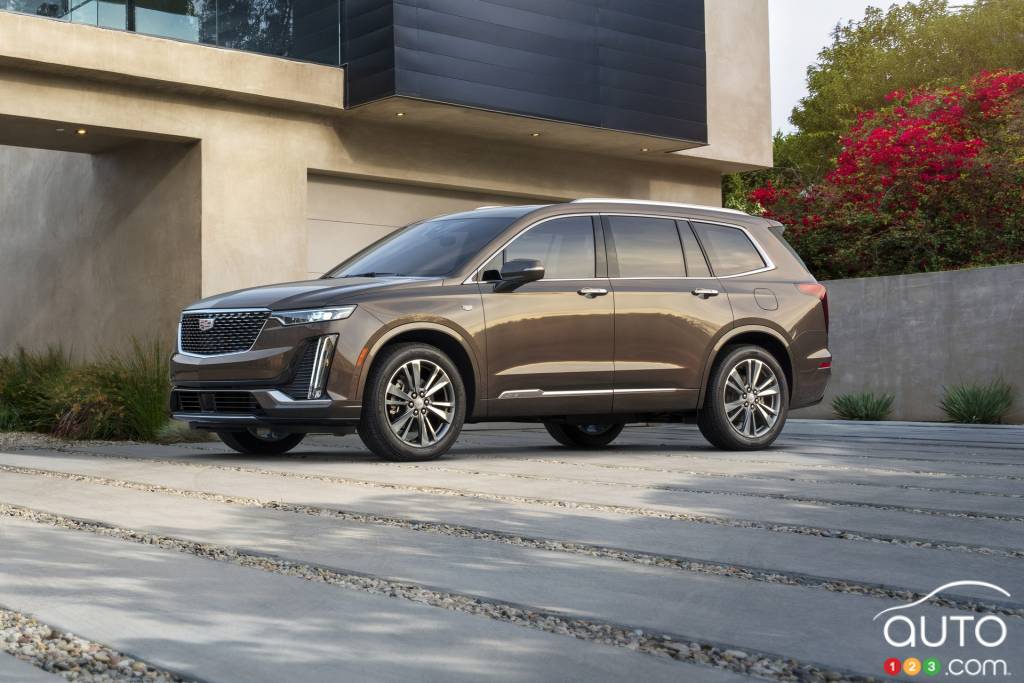 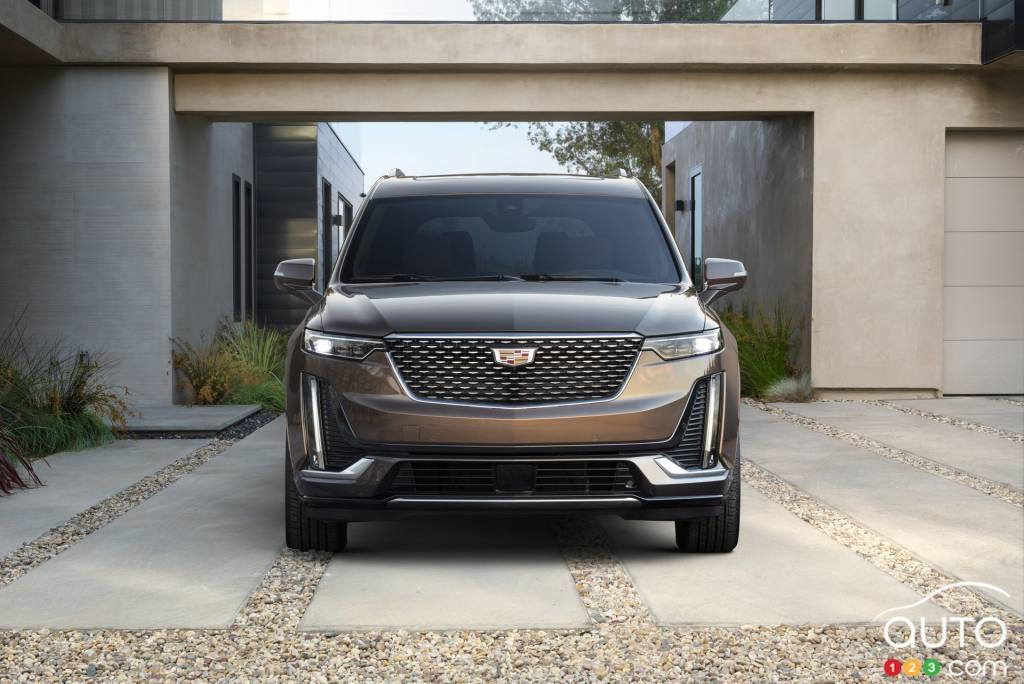 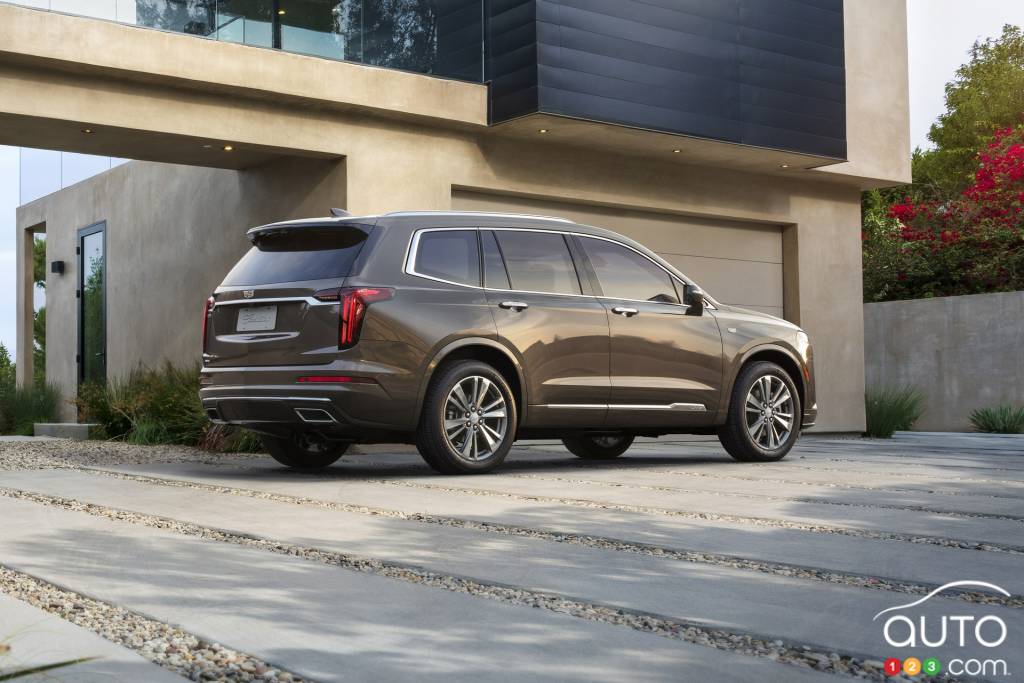 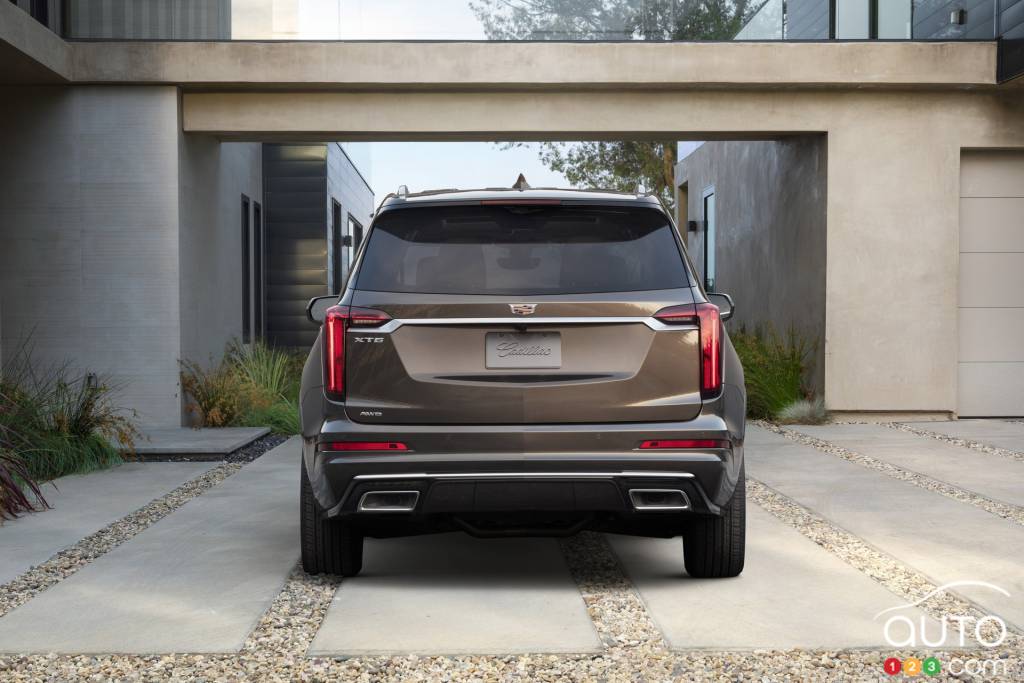 The new 2020 Cadillac XT6 2020 is a model whose arrival was written in the stars. The world needs more luxury SUVs, consumers say! The big XT6 also happens t...