The latest episode of "My Dad's Stronger Than Your Dad" has Ford returning to the top of the heap in the HD pickup truck category. The new Super Duty, the lineup of which consists of a plethora of variants from the 250, 350 and 450 series, has just regained the upper hand in a number of categories to do with capacities - including the most spectacular of the lot, towing.

In fact, in the documentation provided by the manufacturer at the event, 21 categories were proudly displayed in which the new Super Duty series is positioned ahead of the competition, either in the segment as a whole or in a particular niche (half-ton series, for example).

We'll spare you the details in each instance, and suggest you simply take it for granted that the numbers that follow put the new Ford Super Duty ahead of its rivals. Also, with 24 variants in the catalogue, we’ve no choice but to cut things short in terms of what each particular one offers, if only to spare you hours of reading (and possibly extreme boredom). You will find at the end of our review a pricing grid that lists each version. 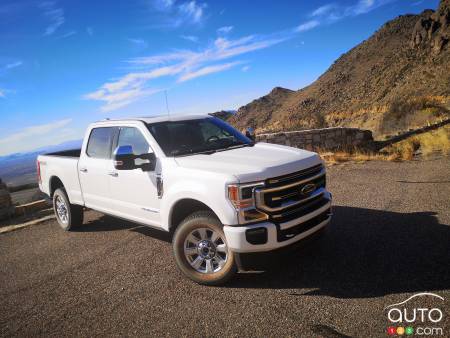 Before we get to that, we focus on what’s new with the 2020 edition of the Super Duty trucks.

Also, take note that necessity also compelled us to forego discussion of the Tremor off-road package, available with a number of variants. Quite simply, there’s just too much info to eal with it all in one go, so we’re going to provide you with a separate report on that particular element soon.

The Chrome approach
Aesthetically, the changes made to this new generation are minor. Ford has fine-tuned a proven recipe, which includes oversized proportions, a massive grille that could threaten the planet's chrome reserves (if such a thing existed) and design elements that serve to differentiate the model, such as badging on the flanks, unique-design wheels, etc. The result is a real eye-catcher of a pickup.

Compared to GM, which has gone big with the fascia of its latest HD models - some still claim to feel traumatized by it -, Ford has taken a more conservative approach, and it should serve the automaker well. Three engines, a new player
For a vehicle tasked with, well, moving mountains, the crux of the issue is the strength of the heart that beats under the hood. And this year, we have a new engine to play with.

The 7.3 – And that new engine is a 7.L V8. The latter is a 7.3-litre V8. Massive, right? Yes, but there’s a nuance: the block size as such is smaller than that of the company's 5.0L engine, as explained to us at the launch event by Tom Summerville, director of the Super Duty brand. We'll spare you the technical details surrounding this seeming sleight of hand, but it's a relevant development, because it means the vehicle is not handicapped by any additional weight, which is a good thing because it's already quite heavy.

Output is 430 hp at 5,500 RPM and 475 lb-ft of torque at 4,000 RPM. Beyond these impressive figures, the engine is also impressively dynamic. It felt to us more lively, for example, than the new gas engine in the heavy-duty Chevrolet Silverado and GMC Sierra, a 6.6-litre V8. 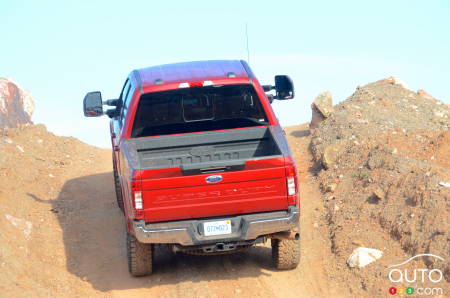 The unit is bolted to a new 10-speed automatic transmission, and our first encounter with it was smooth. We'll come back to it a little later, but in the long run, the verdict on it will come from owners who will be able to really gauge how the unit performs.

The 6.7 - Of course, with an HD truck, you’re very likely to find a diesel engine in the product offering. Unsurprisingly, the 6.7L Power Stroke V8 is back, but also unsurprisingly, it's more powerful than ever and the technical specifications tell the story of rivals overmatched. However, it would be interesting to measure it against GM's 6.6L Duramax V8 diesel engine, no slouch either. 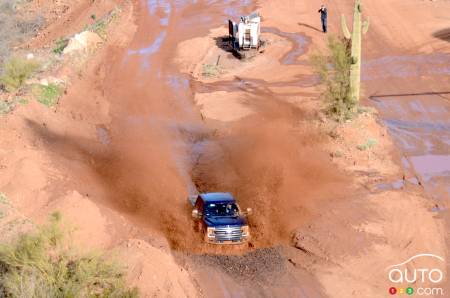 Ford's engine delivers 475 hp at 2,800 RPM and 1,050 lb-ft of torque from 1,600 RPM. I kid you not, you feel like the truck wants to go upright when you step on the accelerator. And, it gives the truck the ability to tow up to 37,000 lb, provided you have the right model configuration. (Basically, the more compact it is, the more it can tow; adding more weight with a crew cab or a larger box reduces its capacity).

And for those who wonder what the point is of being able to tow so much, we'll give you the answer in a bit. 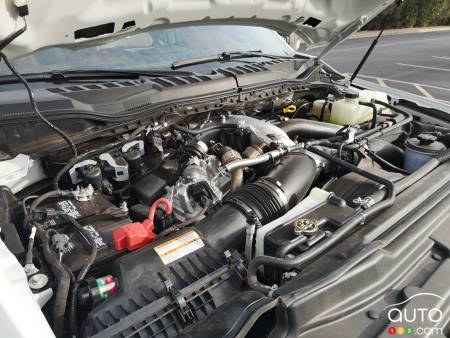 New transmission
The other big news, as we touched on, is the arrival of a new 10-speed transmission. This unit, in play with each of the powertrains, offers a wide ratio and three overdrive gears, as well as drive modes. The latter allow its parameters to be adjusted according to the conditions or the type of work you're doing. The towing setting, for example, delays gear changes when power is needed to climb a hill, while on descents, the same process acts as engine braking. The technology isn't new, but it's pretty darn effective.

Fun fact: the new transmission is the same size as the 6-speed unit (still available on the F-250 and F-350) and only 4 lb heavier. Capabilities
A few more figures on the truck’s capacities. As mentioned, Ford promises the possibility of towing up to 37,000 lb. That’s with a gooseneck hitch; the maximum is 32,500 with a fifth-wheel and 24,200 with a conventional trailer. All this, of course, when the diesel engine is under the hood.

What you have to check as a buyer is which model configuration gives what capability. At a launch event like this, Ford is of course going to serve up the best possible configuration, but keep in mind that with the version you're looking at, you might find a few differences.

Behind the wheel
To sum up the driving experience, let’s say we're a far cry from what heavy-duty pickups offered in terms of comfort 10 or 15 years ago. The ride is very smooth, although you can feel the rigidity of the body and it’s clear that you gain in smoothness with a little weight in the back. We actually noted this during towing operations carried out as part of our test drive. Conclusion
Ford has raised its own bar with this redesigned Super Duty, but the reality is that the offering is just as high-calibre over at General Motors with the Chevrolet Silverado HD and the GMC Sierra HD, not to mention that Ram also offers heavy-duty versions that deserve to be considered.

For those who are wondering what a 37,000-lb towing capacity translates into in the real world, consider this. Until recently, many of those needing to pull loads over 30,000 lb had to turn to heavy trucks that were more expensive to purchase and to maintain. Now, they can use Ford, GM or Ram products and benefit from savings all around to do the same job. 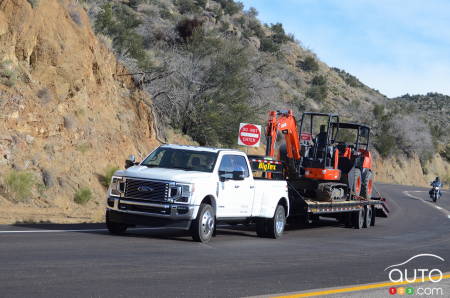 Starting price of each version: 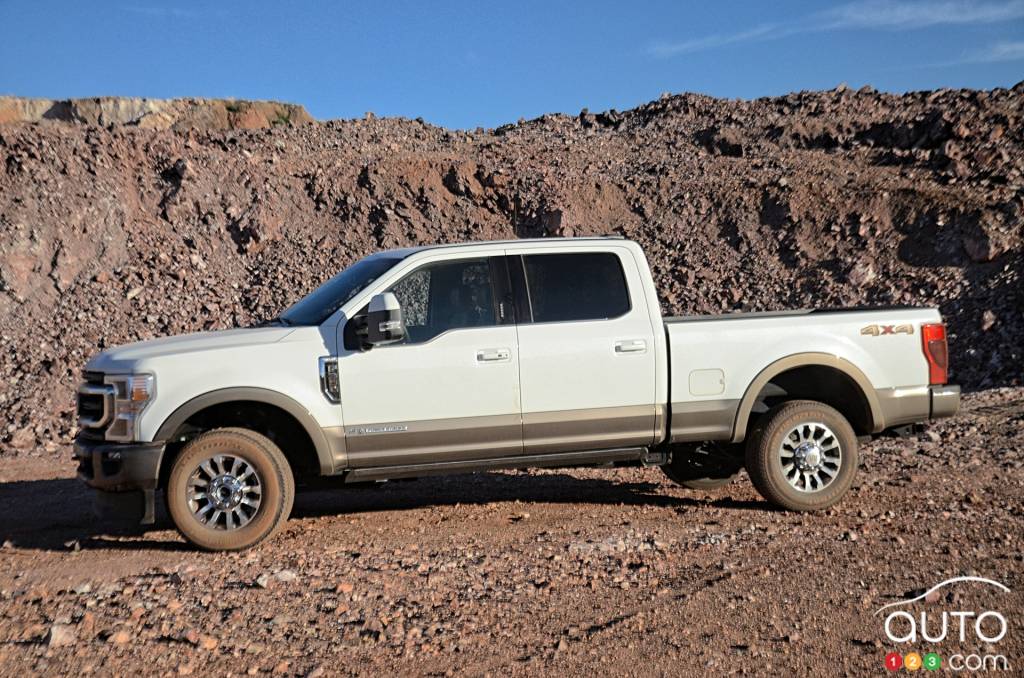 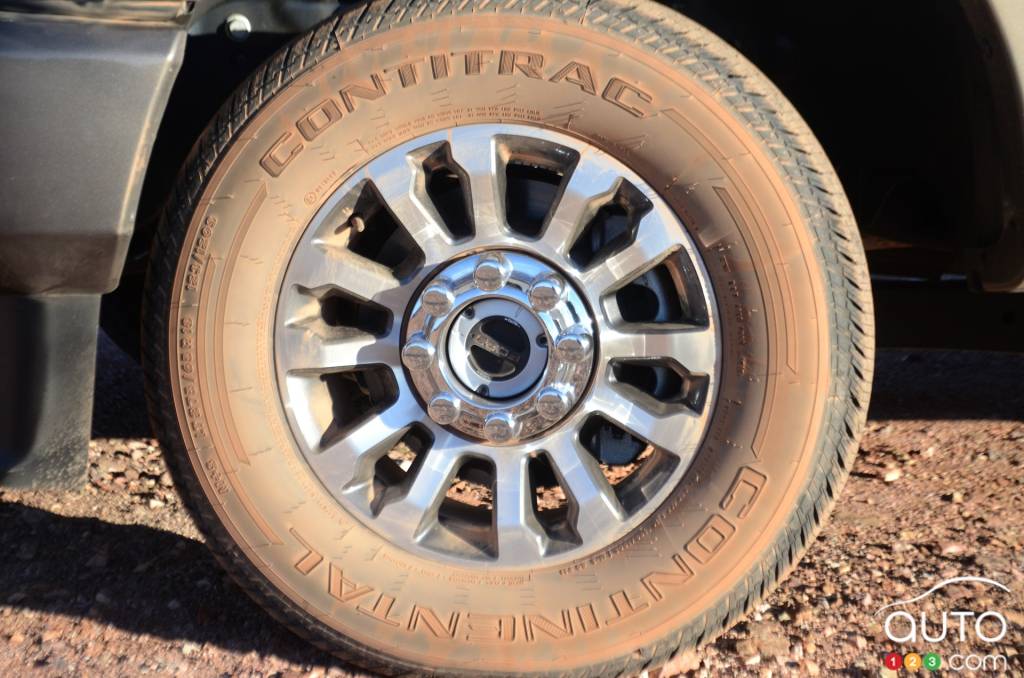 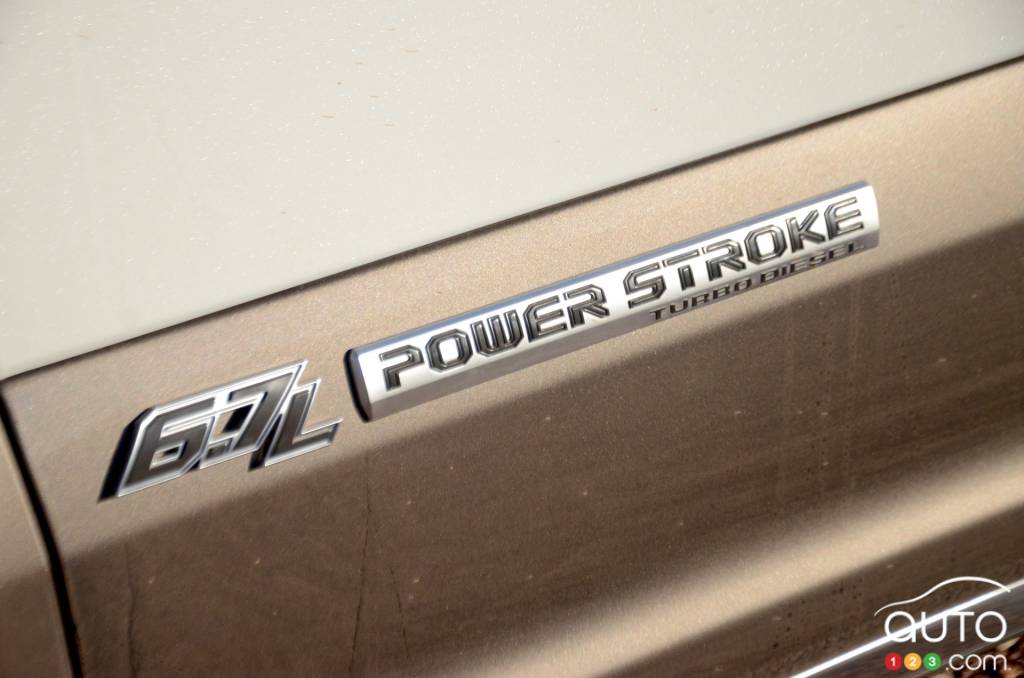 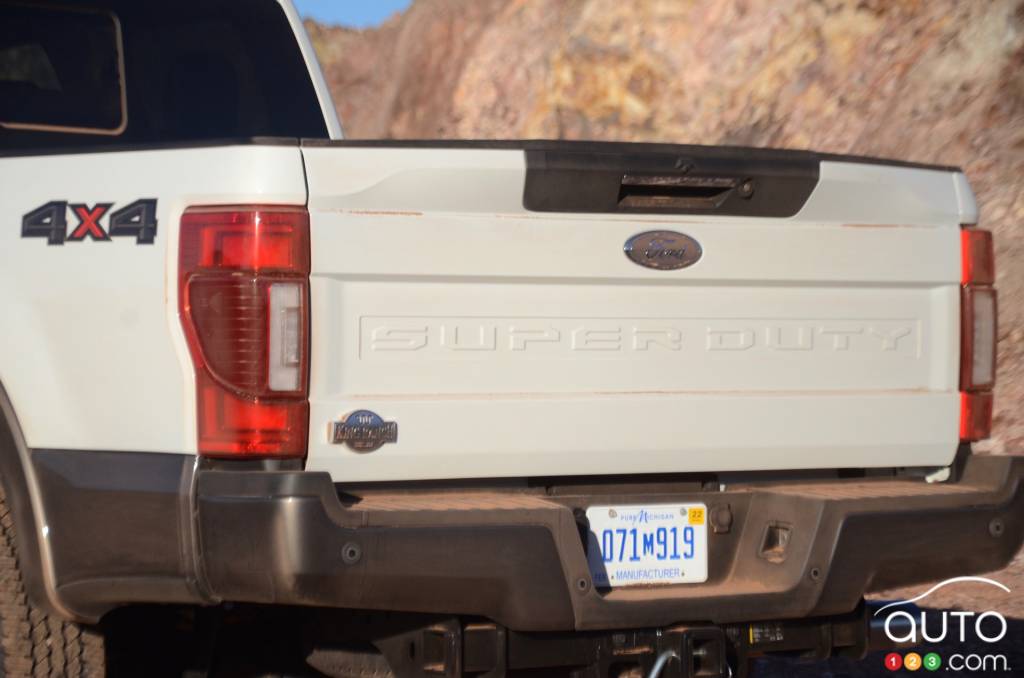 At the launch of the 2020 Ford Super Duty, Auto123 tested versions equipped with the Tremor off-road package. From our experience on the day, we can say to F...

Ford has revealed just what kind of weights its new 2020 Ford Super Duty truck will be able to pull, and it’s little surprise that the towing capacity of the...

Ford is adding an off-road package to its Super Duty truck for 2020. The Tremor package will give the Blue Oval manufacturer a weapon to compete with the Ram...