The first leg of my journey in and with the 2020 Infiniti QX50 concluded as dusk settled in on the town of Notre-Dame-du-Portage, transformed into a ghost town, yes by some frigid October rain, but mainly because of a pandemic that has turned an increasing number of regions in Quebec into red zones.

Two days earlier, that evolving situation had led the owners of the Auberge sur mer to shutter their dining room. Ah, the perils of road-tripping in 2020. Fortunately, my room for the night came equipped with a kitchenette. And so it was that I made a first stop at the grocery store in Rivière-du-Loup before plonking myself down red-eyed in front of an aging TV set seemingly as exhausted as I was.

The next morning, my faithful steed outside was waiting and ready to go, without complaint. I admired once again the red dress of the QX50, which sparkles rain or shine and is my view well worth the extra $1,200 charge. In fact, that transparent triple coat finish is the only option you can add to the model. 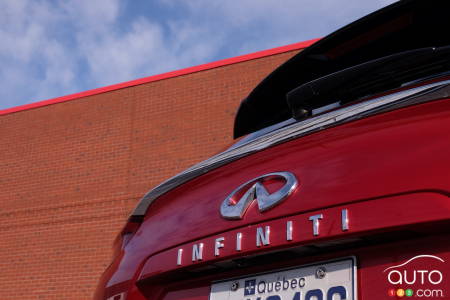 Halt! Who goes there?
The rain had left us, for which I was deeply thankful since I aimed to cover, over the next few hours, a healthy 848 km in one shot. At the end of that distance awaited my AirBnB accommodation in New Scotia, and I meant to arrive there before the sun set behind me. The QX50 and I were on the Trans-canada by 7:30 am.

Fewer than 20 kilometers past the town of Dégelis, I came to the border separating Quebec from New Brunswick. Now, in the olden times before Covid-19, passing from one province to another was child’s play. Residents of the two neighboring provinces visited each other with the frequency of rabbits doing, well, what rabbits do best. Today? New Brunswick, part of the Atlantic bubble, is harder to gain access to than Donald Trump’s taxes.

The goal of this story being to shed light on the QX50 and not on our current border regulations, I’ll give it to you in a nutshell: Though I had on me a document acquired online from the government of Blaine Higgs authorizing me to enter New Brunswick, on the condition of exiting it the same day, the first masked RCMP officer I spoke with was of the strong opinion that I should instead return from whence I came, with no recourse to appeal. Fortunately, the intervention of his superiors during a second interrogation led to me being able to continue on my way east. As long as I got the heck out of the province, ASAP.

Now, that QX50. Do you know how the model’s designers describe its contours? Powerful Elegance. It's apt. In fact I like to think that the aristocratic demeanour of the SUV helped my cause as I inched through the orange cones at the demilitarized zone between the provinces. In my reasoning, no vehicle sporting such a healthy red coat of paint could be carrying a virus-stricken occupant, now could it? 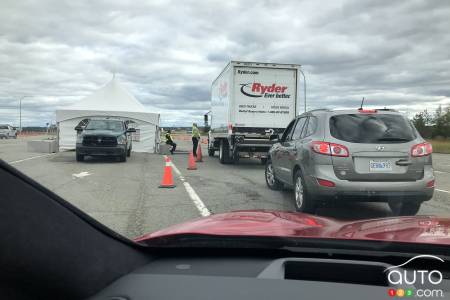 Staving off the boredom
The eight hours of driving that lay ahead would be a great opportunity to get to know the interior of the QX50. Starting with the seats. Nissan has long understood the importance of these in winning over motorists, and in fact the company owns a trademark on the name Zero Gravity to describe the seats designed by its team of researchers in Tokyo, who took inspiration from the feeling of weightlessness experienced by astronauts in space.

If Nissan went to all that trouble even for its mass-market vehicles, you can imagine that luxury brand Infiniti spared no effort in designing the seats that would sit in the QX50.

I’d go so far as to say you really have to work at it if you want to sit uncomfortably in the SUV. The angle and depth of the steering column are adjustable. The front row seats are 10-way power adjustable (two of them for the lumbar region, the source of most humans’ complaints), so the lucky pair sitting up front can play with the placement and firmness of the bottom and back cushions of their seat to suit their respective bodies. That’s on top of the natural, orthopedically minded forms of the seats themselves. You sit well in the QX50. 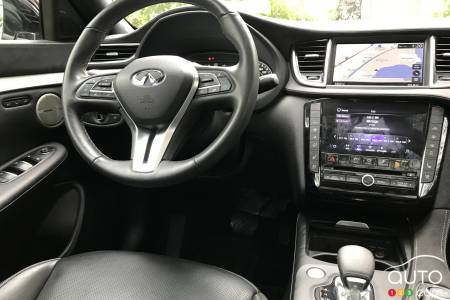 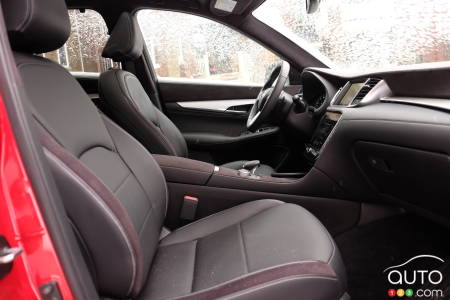 The sensually covered steering wheel is a delight for hand palms, while the head-up display remained perfectly legible even when I was wearing my polarized sunglasses, which isn’t always the case.

The panoramic sunroof really delivers a feeling of wide-open space, which is a good thing here because it compensates for Infiniti’s notorious tendency to overload its cabins with instrumentation and design accents. 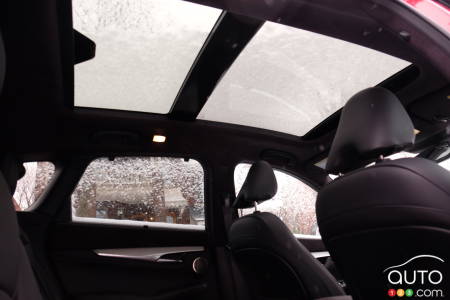 When you’re cool and you know it
My mind has long associated Infiniti vehicles with being mobile laboratories. When Nissan comes up with an innovation, the first customers to benefit from it are Infiniti owners. What’s more, the manufacturer makes sure they know it.

Which means, for one, that boring surfaces are banned. Curves are everywhere, and they say “Look at me”, and “No. over here. Look at me!” The tactile component of this sensory smorgasbord involves so-called “semi-aniline” leather. Aniline is a chemical product that makes it possible to dye hides on a large scale. But as it’s also considered to be toxic, best to explain to consumers that it’s only used in small doses (thus, “semi”). Overhead, an imitation-suede headliner replies tit-for-tat to the elegant leather below; that material is also found on the central console and on the door interiors.

On a more practical note, the instruments are available for easy use, without complications. Take the infotainment display of the InTouch system. Infiniti is of the view that two screens are better than one. I could debate that point, but I have to say that I liked how in this system, the upper screen devotes itself to navigation, leaving the bottom screen to meet my wishes RE the audio and climate-control systems. I do get, however, that there are many folks for whom this is an unnecessary complication of their lives.

Regarding that audio system: whether your weapon of choice is the radio, Apple, Google or SiriusXM, the music you love is delivered via a 16-speaker Bose audio system meant to seduce another of your senses. Does it? Well, it’s a good unit but it’s not the best I’ve come across… 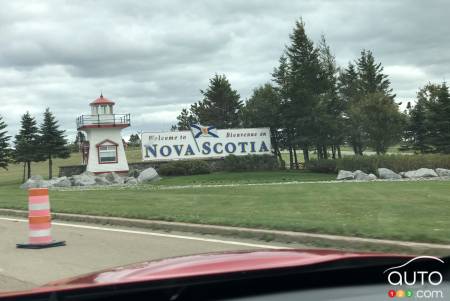 Well-deserved rest
Once I arrived at my destination in Nova Scotia, I settled in in obeisance to the rules that apply to all visitors from outside the Atlantic bubble, that is to say for a 14-day quarantine.

I had that morning left a red zone in a red Infiniti, to find myself in a house surrounded by red-leaved trees, looking out at a red boat bobbing in the bay facing me. In a province with all of four active Covid-19 cases!

Thus reassured and tucked safely into my temporary new home for two weeks, the QX50 resting its horses outside, I considered using the coming free time to learn the Infiniti SUV’s owner manual by heart. Sound like a plan? 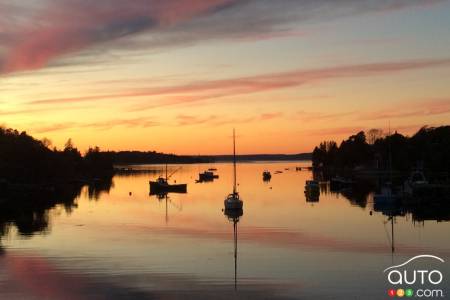